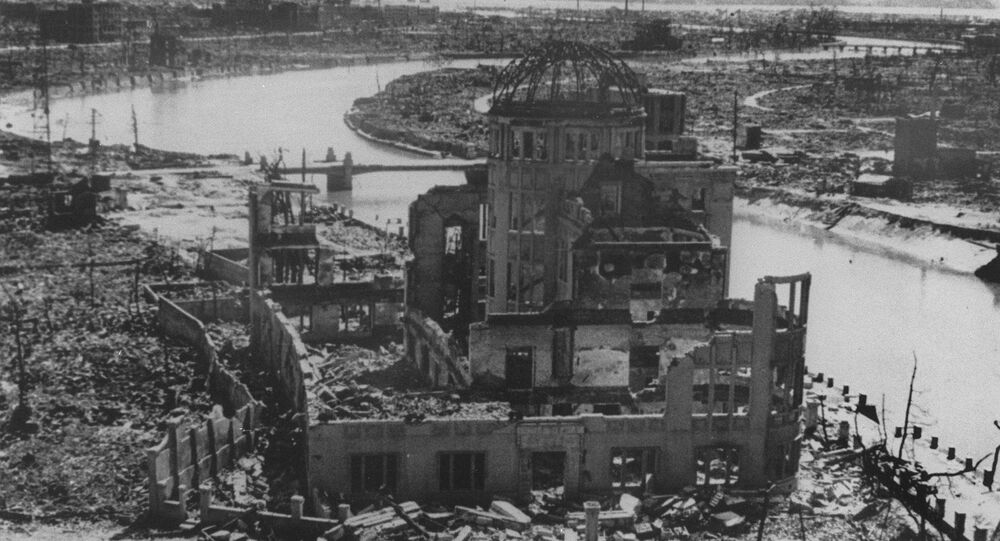 Seventy years have passed since the infamous bombing of the Japanese cities of Hiroshima and Nagasaki by the United States; however, it seems that the historical lesson still remains unlearned.

Seventy years ago, in early August 1945, the United States dropped nuclear bombs on the Japanese cities of Hiroshima and Nagasaki, and in so doing became the first and only nation in history to launch atomic weapons of mass destruction against civilians.

"The whole truth of what the Nuremburg tribunal would later help define as an international war crime and a crime against humanity has been heavily censored and mythologized ever since war-weary Americans in 1945 accepted the propaganda that the bombings were necessary to shorten the war and prevent the loss of a million US soldiers during the allegedly planned November 1945 invasion," American researcher Dr. Gary G. Kohls pointed out.

On August 6, 1945 American pilot Paul Tibbets attacked the city of Hiroshima with the atomic bomb "Little Boy." Over 70,000 died immediately, including 16 American prisoners of war. About 200,000 died in agony from the radiation sickness months later.

On August 9 another American B-29 bomber called Bockscar released "Fat Man," the plutonium bomb named after Winston Churchill, over the port city of Nagasaki. About 75,000 Japanese civilians died from the blast, while over 70,000 were seriously wounded.

"Japanese Emperor Hirohito announced Japan's decision to surrender unconditionally on August 12, 1945. Had Hirohito not surrendered, the United States had plans to drop atomic bombs on Kyoto, Yokohama, and Kokura. If those bombings failed to succeed in forcing Japan's hand, two additional nuclear bombings would have been launched against Niigata and Hirohito's own imperial palace in downtown Tokyo," US author and investigative journalist Wayne Madsen narrated.

© AP Photo / Matt York
Amid Endless US Wars, McCain Regrets Not Starting Another One in Ukraine
Embarrassingly enough, US historians and policy makers continue to claim that the bombing of defenseless Hiroshima and Nagasaki was justified and prevented even greater casualties.

However, they remain silent about the disturbing fact that Japan was ready to surrender to the Allies months before the hideous nuclear attack.

"American intelligence agencies, with the full knowledge of President Roosevelt and President Truman's administrations, were fully aware of Japan's search for ways to honorably surrender months before Truman gave the fateful order to incinerate Hiroshima," Dr. Kohls stressed, adding that Washington evidently could have ended the war before Hiroshima.

"Japan was working on peace negotiations through its ambassador in Moscow as early as April of 1945, with surrender feelers from Japan occurring as far back as 1944," the researcher elaborated.

Dr. Kohls quoted then-US Secretary of War Henry Lewis Stimson who admitted: "A large segment of the Japanese cabinet was ready in the spring of 1945 to accept substantially the same terms as those finally agreed on."

© Flickr / Maarten Heerlien
Americans Still Believe 1945 Nuclear Bombing of Japan Was Justified – Poll
The experts noted that America's nuclear muscle flexing was aimed to demonstrate to the world, particularly the USSR and Joseph Stalin, a growing military might of the would-be "global hegemon."

It is worth mentioning that Washington's bellicose policy makers even went so far as to consider "Operation Unthinkable," a plan to nuke the Soviet Union offered by UK Prime Minister Winston Churchill. The plan had been developed by the British Armed Forces' Joint Planning Staff at the end of May 1945, just weeks later after the Soviet Union and its Allies defeated Nazi Germany.

"He [Churchill] pointed out that if an atomic bomb could be dropped on the Kremlin, wiping it out, it would be a very easy problem to handle the balance of Russia, which would be without direction," an unclassified note from the FBI archive stated.

© Flickr / Historical Records
Ready, Steady, Go! US Set to Usher in Era of New Nuclear Arms Race?
Alas, according to Dr. Kohls "historically-illiterate Americans" are blocked from learning the historical truth about the "American Empire." Thus, predictably, the Pew Research Center polls indicate that almost 56 percent of Americans still believe that the act of dropping atom bombs on Hiroshima and Nagasaki was justified.

Unfortunately, the US' decision to use nuclear weapons against Japan had ushered in an era of the dangerous nuclear arms race of the Cold War, Madsen noted.

"The heirs of the atomic bomb militarists who surrounded Truman are still with us today," the investigative journalist stressed, pointing the finger at warmongering American neocons.

"They are as wrong today as they were on the day America launched the first wartime nuclear attacks. August 6 and 9, 1945 were America's 'days of infamy,'" he added bitterly.

US, Russia Should Have Diplomatic Dialogue on INF Treaty - CRS