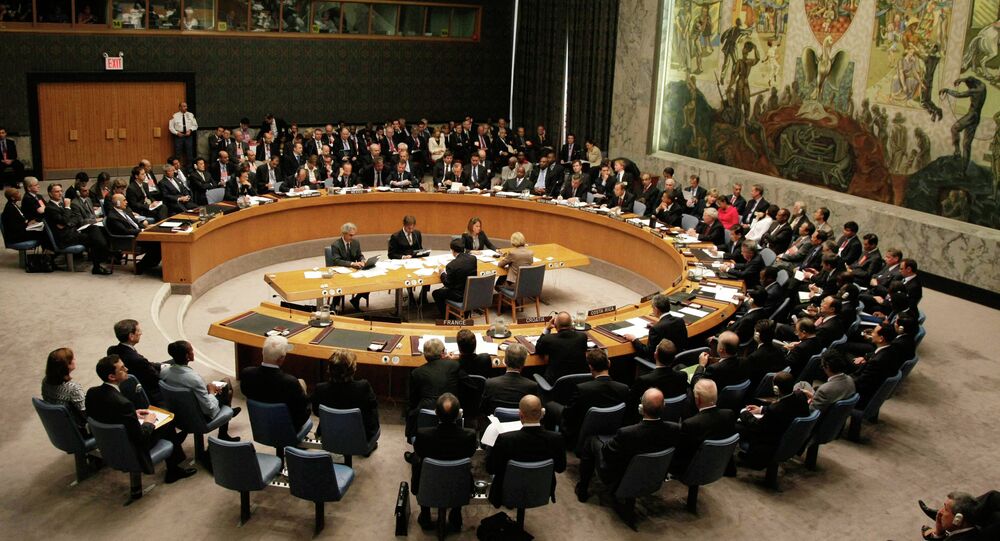 Russian envoy to the United Nations, Vitaly Churkin claims that a number of statements made during the latest meeting of the UN Security Council, which voted on a draft resolution on the MH17 plane crash on Wednesday, were "offensive".

© Sputnik / Andrey Stenin
Establishing Tribunal on MH17 Crash Before Finding Guilty Premature - NGO
UNITED NATIONS (Sputnik) – A number of statements made during the latest meeting of the UN Security Council, which voted on a draft resolution on the MH17 plane crash on Wednesday, were "offensive," Russian envoy to the United Nations, Vitaly Churkin, said at the conclusion of the UN meeting.

"I consider certain statements offensive and not worthy of diplomats," Churkin said on Wednesday after Russia voted against the draft resolution on setting up an international tribunal to prosecute those responsible for the crash of Malaysia Airlines Flight MH17 in eastern Ukraine last year.

Russia’s vote blocked the approval of the document, which was introduced by Malaysia. The draft was supported by 11 out of 15 UN Security Council member-states, however, since Russia has a veto power being a permanent member of the Council, the document was not passed.

Churkin stressed that despite its opposition to the international tribunal, Russia is ready to continue assisting a thorough and objective investigation into the causes and circumstances of the Boeing 777 crash.

Malaysia Airlines Flight MH17 crashed in Ukraine's eastern region of Donetsk on July 17, 2014, when it was on its way from Amsterdam to Kuala Lumpur. All 298 people on board, mostly Dutch citizens, were killed.

At the time, fighting was going on in the area between Ukrainian troops and independence supporters, who were targeted by Kiev’s special military operation starting from April 2014.

© AP Photo / Mstyslan Chernov
Russia Vetoes Creation of United Nations Tribunal to Probe MH17 Crash
The Dutch Safety Board, authorized to conduct an investigation into the MH17 incident, has released a preliminary report on the crash, revealing that the plane broke up in mid-air after being hit "by a number of high-energy objects penetrating the plane from the outside."

Kiev authorities and independence fighters have blamed each other for the downing of the plane.

Russian arms manufacturer Almaz-Antey has unveiled the results of its own inquiry into the crash, showing that flight MH17 was downed by a guided missile launched by a Buk-M1 system, which remains in service in the Ukrainian army.

Earlier this month, the Malaysian delegation came up with a draft UN Security Council resolution on establishing an international tribunal to prosecute those responsible for the downing of Malaysia Airlines flight MH17.

Russia has repeatedly stressed that the tribunal initiative is premature and counterproductive. Moscow insists that it is necessary to wait for the Dutch Safety Board to release their final report into the crash, expected in October 2015.

UNSC to Vote on MH17 Tribunal Proposal on Wednesday