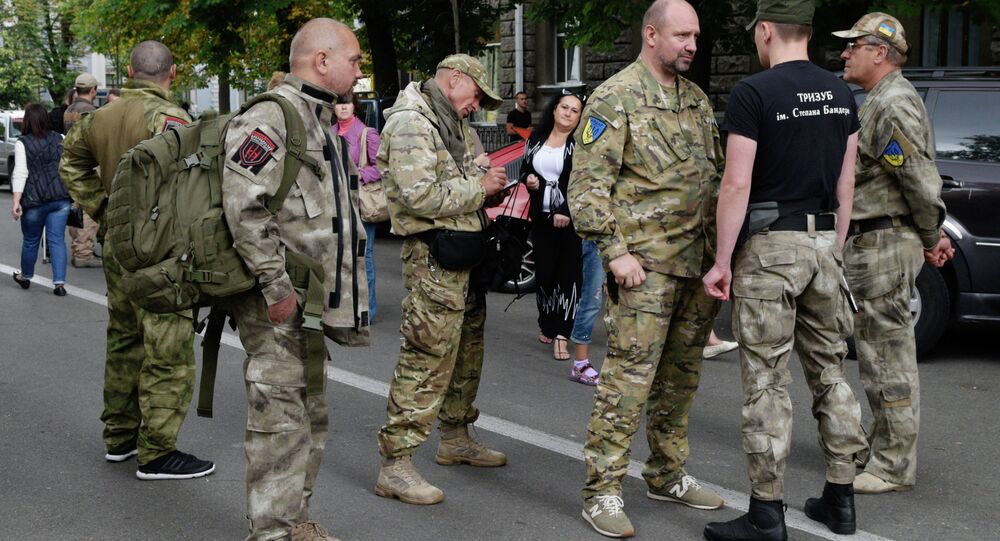 Vice President of the European Parliament Ryszard Czarnecki during a meeting with the Ukrainian President Petro Poroshenko said that the events in the western Ukrainian town of Mukachevo have damaged Ukraine’s image.

Czarnecki also noted that the activity of the pro-Russian lobby movement is on the rise in the European Union.

© AFP 2021 / SERGEI SUPINSKY
Mukachevo Shootout Stems From Kiev’s Reliance on Neo-Nazis - Moscow
The vice president allegedly confirmed the readiness of the European Parliament to support Ukraine in the introduction of a visa-free regime for the country in 2016.

On July 11, Right Sector members exchanged fire with local police. The incident left four people dead and 14 injured, including law enforcement officers. The attackers fled and hid in the mountains.

Right Sector was formed as a coalition of nationalist and neo-Nazi organizations at the end of 2013. The organization has played a major role in violent clashes with police, and played a key role in escalating last year's violence in Kiev which culminated in the February 2014 coup.

In November 2014, Russia’s Supreme Court blacklisted Right Sector as an extremist organization and banned its activity in Russia. Earlier, Russia launched a criminal case against Yarosh for public incitement of terrorism.