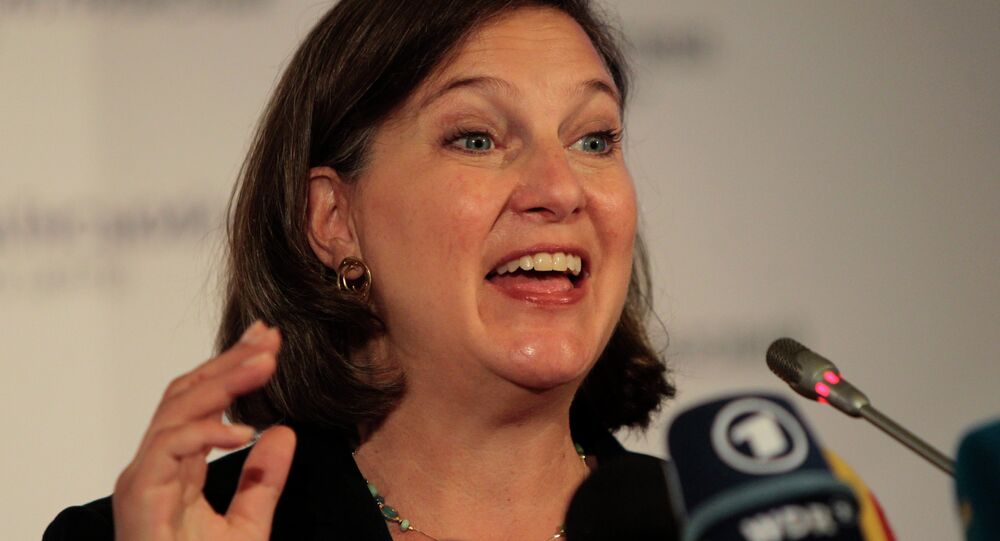 American neocons have turned wars into a profitable business, a US investigative journalist exposes, nailing Assistant Secretary of State Victoria Nuland and her husband, arch-neocon Robert Kagan, for their dubious foreign strategy.

"If the neoconservatives have their way again, US ground troops will reoccupy Iraq, the US military will take out Syria's secular government (likely helping al-Qaeda and Islamic State take over), and the US Congress will not only kill the Iran nuclear deal but follow that with a massive increase in military spending," Parry underscored.

© Flickr / U.S. Embassy Moldova
US Wants Balkans to Set Example to Ukraine, Middle East - Nuland
The point is that American neo-conservatives have turned the war into a profitable business, the journalist pointed out.

According to Parry this dubious strategy is personified by "a single Washington power couple" — co-founder of the Project for the New American Century Robert Kagan and his wife, Assistant Secretary of State for European Affairs Victoria Nuland.

The spouses are two peas in a pod: while Kagan was sweating his guts out to propagate the necessity of the Iraq War, Nuland engineered the February coup in Kiev that started "a nasty civil war and created a confrontation between nuclear-armed United States and Russia."

Although "a sane person might trace the origins of the bloodthirsty Islamic State back to President George W. Bush's neocon-inspired Iraq War," Kagan and his fellow neocons do not acknowledge that they bear the responsibility for this "head-chopping phenomenon," Parry noted. Instead, Kagan is urging the American decision-makers to intervene in Iran and Syria.

© AFP 2021 / VANO SHLAMOV
Nuland: Macedonia, Bosnia to Toe US-EU Line or Face Decades in Isolation
"In Kagan's call for war and more war, we're seeing, again, the consequence of failing to hold neocons accountable after they pushed the country into the illegal and catastrophic Iraq War by selling lies about weapons of mass destruction and telling tales about how easy it would be," the investigative journalist elaborated.

So what is the root cause of Kagan's warmongering?

The arch-neocon wants the Obama administration to pour tens of billions of dollar into the US military-industrial complex. However, this is not enough for Kagan, who calls for even more military spending to counterbalance "growing Chinese power," an "aggressive Russia" and an "increasingly hegemonic Iran."

"There's also a family-business aspect to these wars and confrontations, since the Kagans collectively serve not just to start conflicts but to profit from grateful military contractors who kick back a share of the money to the think tanks that employ the Kagans," the investigative journalist revealed.

© AP Photo / Evgeny Kraws
US Prepares to Put More Pressure on Russia, Threatens ‘Scaling Up Costs’
Parry pointed out that Robert's brother — Frederick Kagan, a former professor of military history at the US Military Academy at West Point — currently works at the American Enterprise Institute, which has long benefitted from the Military-Industrial Complex.

Meanwhile, Frederick's wife Kimberly founded her own think tank called the Institute for the Study of War (ISW) in 2007. Among ISW's original supporters are right-wing foundations, national security contractors, such as General Dynamics, Northrop Grumman and CACI and CIA-backed technological firms.

Curiously enough, while earlier ISW had specialized in the Middle Eastern wars in Iraq and Afghanistan, more recently the Institute has focused on the Ukrainian civil war.

"So, to understand the enduring influence of the neocons — and the Kagan clan, in particular — you have to appreciate the money connections between the business of war and the business of selling war. When the military contractors do well, the think tanks that advocate for heightened global tensions do well, too," Parry underscored.