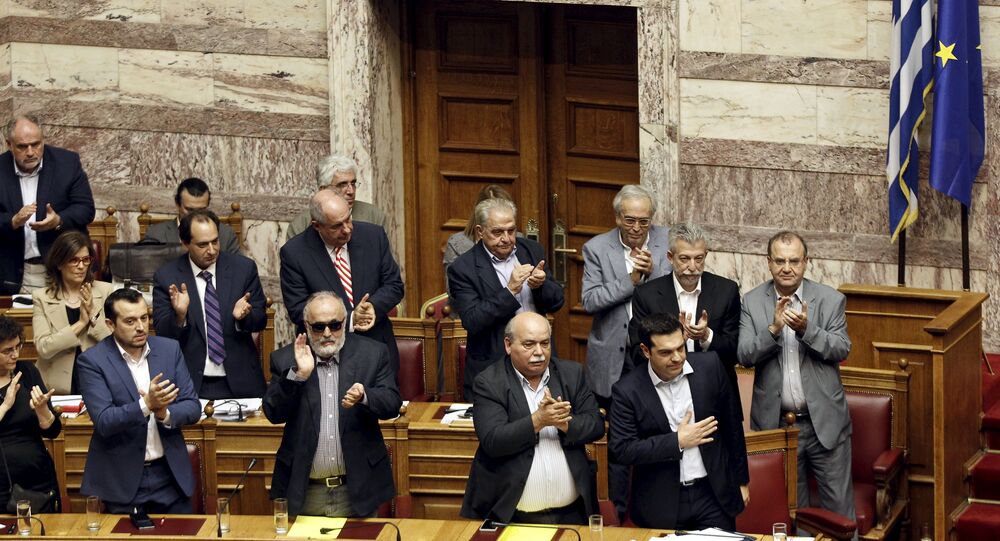 MOSCOW (Sputnik) — Earlier on Wednesday, the Greek Parliament voted in support of strict austerity measures negotiated with Eurozone leaders on July 13, paving the way for the resumption of international financial aid for the debt-ridden country.

“Around 76% of the Parliament voted in favor of the agreement, but this is only the first side. The other side is that there is a huge division in his [Tsipras'] Syriza party, because a huge minority- of course, it is a minority- of its members disagree, and so the party is in an unstable position," Fanaras said.

© REUTERS / Yannis Behrakis
Next! Greece’s Deputy Defense Minister Announces Readiness to Resign
One of the biggest Greek pollsters added that there was a possibility that those who had voted against the new bailout agreement could form a new party, because the politicians speak to one third of Syriza voters and about 10 percent of the Greek population.

Greece received some $270 billion from its main creditors, including the European Union, the IMF and the European Central Bank under two bailout programs, and now struggles to repay it debt.

On Monday, Eurozone leaders reached an agreement on a third bailout program, estimated at $95-billion aid, for Greece in exchange for economic reforms, including tax increases and pension cuts. The austerity measures are highly unpopular among the Greek population.

New Elections in Greece Possible in September or October