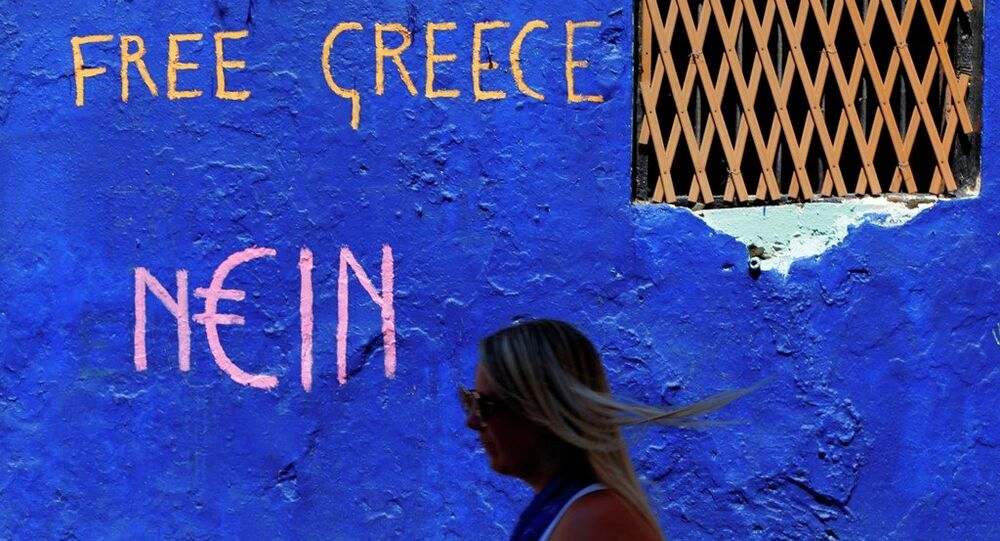 The painful bailout deal Greece was forced to accept this week has exposed what many feared – the European Union is run by a body that could best be described as the German Empire in terms of both its operation and implications, political journalist David Dayen said.

© Sputnik / Igor Zarembo
Who’s Next for Berlin’s Financial Blitzkrieg?
Dayen compared the agreement Greek Prime Minister Alexis Tsipras had to sign to a "surrender document, which looks like the terms you impose on a country that lost a war."

And a true war it was, with the winning side taking special pleasure in crashing and humiliating what essentially should have been a partner, not an enemy. Accordingly, the wishes of the Greek leadership or people were not taken into consideration.

"The German consuls were as vindictive as possible, slowly and deliberately grinding down the Greek economy, carpet-bombing the political opposition, and openly threatening expulsion from the European monetary union as punishment," Dayen observed.

© AP Photo / Petros Giannakouris
Young girls wave Greek flags as supporters of the No vote react after the first results of the referendum at Syntagma square in Athens, Sunday, July 5, 2015.

To a certain extent Berlin also acted ruthlessly to send a message to its allies in the European Union, whom the journalist calls "satellite countries" or "client states":

"Step out of line, try to reverse an austerity agenda that has brought recession, if not outright depression, to the countries forced into its maw, and you will be pulverized, humiliated, forced to grovel and beg forgiveness," Dayen said.

My country was used to experiment with austerity. The experiment, we must admit, failed. #Greece #EPlenary #olomeleiaEK #Eurosummit

© AP Photo / Michael Sohn
German Exit or Grexit? German Hegemony Needs to End – Portuguese Newspaper
Greece chose not to venture into the unknown (a Grexit) but opted to accept a new set of austerity measures, although they evidently do not work. Similar deals with international creditors choked the economy: Greeсe's GDP has fallen by 25 percent since the crisis broke out. The measures also failed to lead to sustainable growth and did not bring Athens closer to tackling its oversized public sector or tax evasion.

Forcing a country to subscribe to such a deal is as far away from democracy as possible but the EU, according to the journalist, was never bound to be a democratic organization even if it was envisaged as one.

"In reality, the dream of a United States of Europe was never realistic, given these primal forces. If it was, the parties involved would have set up a legitimate fiscal union and real power to the elected European parliament. Instead, they built a way for Germany to lord over a series of client states. And this became very clear amid the economic crisis," Dayen asserted.

© AFP 2020 / LOUISA GOULIAMAKI
A woman passes by the Bank of Greece headquarters where 'Greece' was changed to 'Berlin' during a 24-hour general strike in Athens on February 7, 2012.

What the European Union boils down to is "a shotgun marriage run on threats," the journalist pointed out in an opinion piece published by Salon.

What Germany should keep in mind is that empires – no matter how powerful or vital they are – are destined to fall.

"The thing about empires is that they end sooner or later, because human beings don't much like to be controlled by an overlord they never elected or endorsed," the journalist pointed out, adding that "the inevitable breakup [of the German Empire] will breed global instability layered atop an already shaky world."

Does Berlin truly want to learn this the hard way?

Teetering on the Edge: Franco-German Divorce Around the Corner?