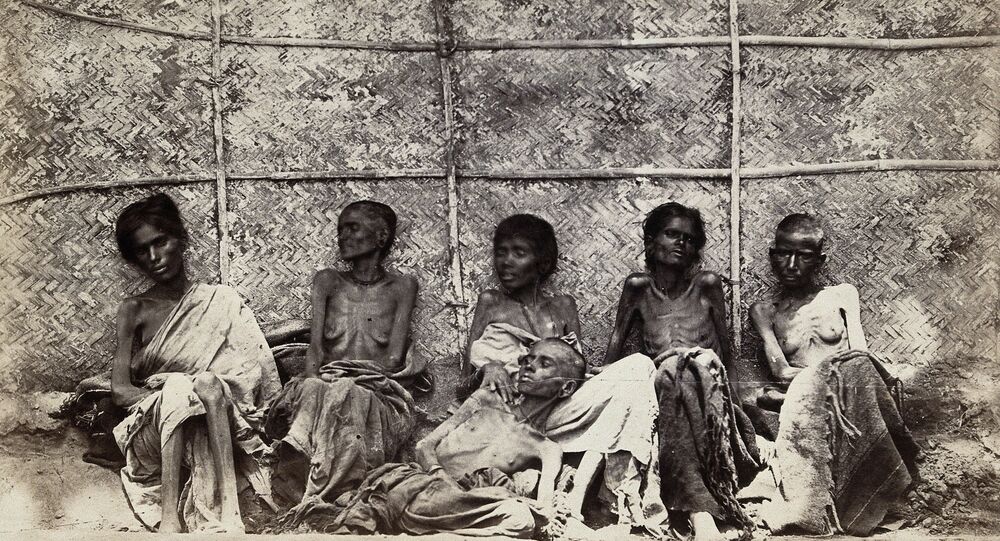 While London has rushed to point the accusing finger at Serbs for the Srebrenica tragedy, the British have apparently forgotten their own shameful history of the genocide of the people of India, Rakesh Krishnan Simha told Sputnik.

© AP Photo / Dimitri Messinis
The Yugoslav Wars: Story of Serbian Genocide Still Remains Untold
While British policy makers are expressing their "righteous" anger over Russia's decision to veto their resolution on the Srebrenica "genocide" of 1995 discussed by the UN Security Council earlier this month, London should obviously look in the mirror and recall its own colonial past, New Zealand-based journalist and foreign affairs analyst Rakesh Krishnan Simha told Sputnik.

There is no need to delve deep into history, the analyst noted, referring to the infamous Bengal Famine of 1943-44 that can be classified as the greatest disaster in the subcontinent in the 20th century.

"Bengal had a bountiful harvest in 1942, but the British started diverting vast quantities of food grain from India to Britain, contributing to a massive food shortage in the areas comprising present-day West Bengal, Odisha, Bihar and Bangladesh," the foreign affairs analyst narrated in his article "Remembering India's Forgotten Holocaust" in 2014.

Just in a year, the manmade famine had claimed the lives of over 3 million Indians.

© Wikipedia / Adam63
The Famine in India: Natives Waiting for Relief at Bangalore

"Winston Churchill was just the last of the many murderous despots who presided over India's fate during the over 200 years of British rule. He said, "I hate Indians. They are beastly people with a beastly religion"," Simha told Sputnik.

Can We Classify the Bengal Famine as Genocide?

© AP Photo / Lefteris Pitarakis
UK Was Always Aware of CIA Torture Practices: Former Guantanamo Detainee
Can we classify the Bengal Famine as genocide? Genocide is a systematic killing of a people in great numbers and Churchill intentionally, and with open malice towards Indians, diverted grain from India to Europe, the analyst pointed out. He added that even when desperate pleas came from the administration in Bengal, Churchill refused to dispatch emergency food supplies. The UK prime minister even went so far as to blame Indians for the famine, saying that they "breed like rabbits."

"When the British representatives in India asked Churchill to stop diverting Indian food grains to Europe and to supply India with wheat from Australia, he replied: "If there is famine in India, then why is Gandhi still alive?"" the analyst remarked bitterly.

The Bengal Famine happened despite India being a food-surplus country with a bumper harvest that year, he stressed. And that had not been the first time when the British rulers facilitated food shortages in India.

Simha stressed that during over 200 years of British rule, India saw at least two dozen major famines, which collectively killed 60 million people. The journalist added that the figure is based on numbers collated by British officials and economists and in reality it is significantly higher.

© AP Photo / Vadim Ghirda
UK Pushing to Bomb Syria as Defense Chief Labels ISIL Strategy 'Illogical'
The analyst pointed out that during the 1877 famine in India, the only acquire to get some food was to work in the British labor camps. Within those camps, starving Indians received only 16 ounces of rice per day — less than the Jewish inmates of Buchenwald, the Nazi concentration camp of the Second World War.

One would say that India had faced famines even before the British colonial rule. However, "in the past 2000 years of Indian history, there were very few famine deaths because the Indian rulers ensured the well-being of the people through emergency food supplies and field kitchens," the journalist underscored.

The history of manmade famines in India under the British rule can be obviously compared to the Jewish Holocaust of the Second World War, according to Rakesh Krishnan Simha.

"Hitler's hatred for Jews led to the Holocaust and Britain's malice towards Indians caused the deaths of at least 60 million Indians, including three million people during the Bengal Famine. Proportionately, the Bengal Famine was a holocaust on a bigger scale than the Jewish Holocaust. It took Hitler 12 years to murder 6 million Jews, but the British starved at least 3 million Indians to death in a 15 month period from 1943 to 1944. Indian estimates put the toll at 7 million," the journalist told Sputnik.

© AP Photo / Jon Furniss/Invision
Does the House of Windsor Have Right to British Throne?
Simha pointed out that Hitler wanted to destroy the entire Jewish population of Europe because of race and religious reasons; furthermore, Hitler saw Jews as competitors in the German economy.

"Hitler also wanted to create Lebensraum in Europe for pure Germans. If you look at the history of English colonialism, they have created their own versions of Lebensraum in Canada, the US, Australia and New Zealand after the genocide of native populations," the analyst underscored.

"They [the British] may have wanted to do the same in India. But the British couldn't replicate armed genocide in India because Indians put up a ferocious counter attack and defeated the British in several wars. So the British may have decided to systematically eradicate Indians through famines. In fact, Churchill's scorched earth policy was intended to enfeeble the Indian population so the Japanese-armed Indian National Army which was planning to liberate India from the east would not find able bodied men in Bengal," he elaborated.

Why Does the Story of the Indian Genocide Remain Unspoken?

So, why does the story of the Indian genocide still remain unspoken? Why does the West that has recently rushed to blame Serbs for "genocide" of Bosnian Muslims remains suspiciously silent about its own hideous atrocities?

"First up, why would the US, UK, Spain or France admit at all to genocides they have committed? It is precisely because the scale of their own crimes is so staggering that they quickly latch on to other countries' internal problems. For instance, after an alleged 100,000 East Timorese were killed by the Indonesians, the West suddenly adopted the role of savior, conscience keeper and protector. It then invaded East Timor and illegally made it an independent country. It did the same in Kosovo," Rakesh Krishnan Simha elaborated.

© REUTERS / Larry Downing
UK Spy Chiefs Tried to Hide Involvement in CIA Torture Before Report Release
"The UK and British immigrants in America wiped out Native Indians by the tens of millions. In Africa, the British massacred Kenyans," he added.

According to the journalist, considering the scale of the atrocities, the international community should conduct an official investigation into the Indian genocide.

"If the US Congress can condemn the Turkish genocide of Armenians a 100 years ago, then they can also censure Britain for even bigger holocausts in India. For this to happen, private Indian individuals must come forward to demand apology and reparations. There are a number of Indians who remember the holocaust and were affected by it," the analyst pointed out.

© Flickr / Jeff Laitila
London Backtracking: Diego Garcia Island Still Off Limits to Natives
And there is a precedent, he stressed: "Kenya has asked Britain for an apology, and the British have rendered one."

However, there are a number of obstacles in the way of restoring justice. First of all it is not in the British interests to recognize such a hideous crime. Furthermore, the Indian elite have already established close ties with the British nobilities. Many of them have their children studying in American and British colleges, or have business connections, or have family living in Britain, Simha noted. Maybe that is why most Indians have no memory of these holocausts because they are not taught in Indian schools, the foreign affairs analyst emphasized.