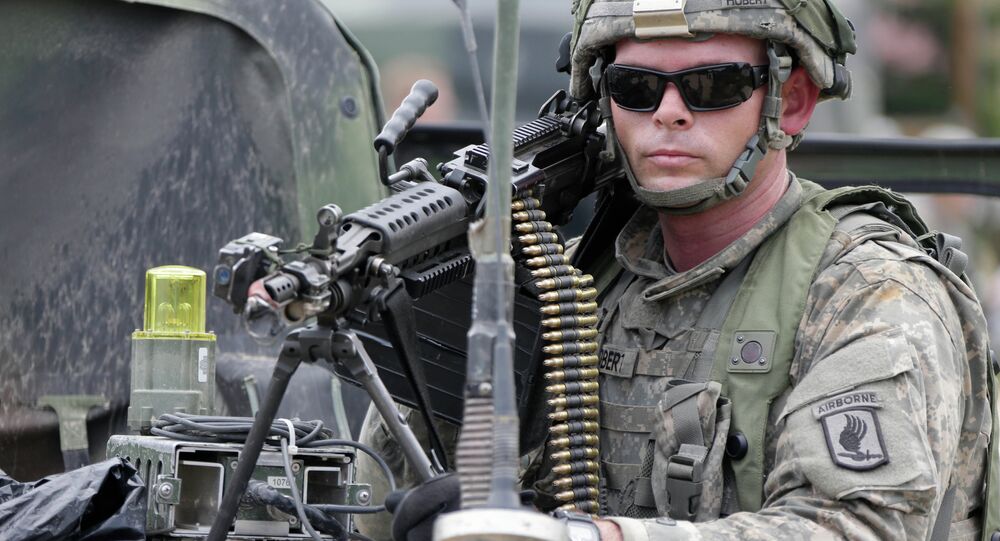 While the US is taking the side of neo-Nazis and Islamists in their confrontation with Russia, the question arises what is behind Washington's strange addiction to war, American journalist Scott McConnell emphasizes.

© AP Photo / Lee Jin-man
Why is Pentagon Sweating Bullets Over Sino-Russian Alliance?
What if Obama's main legacy that he will leave to the next president of the United States is a new cold war, and "potentially even hot war," with Russia, American conservative journalist Scott McConnell asks.

And what makes matters even worse is that Washington in its confrontation with Moscow over Ukraine has obviously chosen the "wrong" side by establishing an alliance with neo-Nazi and Islamist collaborators. Indeed, the Chechen Islamists have recently made an announcement that they want to join Ukrainian ultra-nationalists and neo-Nazis in order to wage a joint war against Russia.

"For official Washington, the Ukrainian ally it has embraced is buttressed by a coalition of Islamic militants and neo-Nazis, along with the various elite ethnic Ukrainians who have learned that milking the increasingly lush Washington-Kiev connection can be lucrative," McConnell pointed out.

© Wikipedia
Obama's Controversial Legacy: Won a Few, Lost a Lot
On the other hand, while accusing Vladimir Putin of "saber-rattling", namely Russia's military exercises conducted in its own territory, Washington remains silent over the fact that NATO was nearly simultaneously carrying out its joint military drills with the Baltic nations in close proximity to Russia's borders.

"NATO has ramped up its war gaming in the Baltic Sea, conducting a large military exercise called BALTOPS involving 5,600 troops and 50 warships. Doesn't sound like that much, but perhaps Americans should contemplate how they would feel about a comparable Chinese or Russian exercise in the Caribbean," the journalist underscored, adding that other maneuvers all amounting to about 20,000 NATO troops were launched by the US in the territory of former Warsaw Pact states.

Posing the question why Washington is adding fuel to the fire of Russo-American tensions, the journalist noted that just three years ago Obama mocked Mitt Romney who was beating the war drums about "the Russian threat."

"How did we arrive at this strange place-a de facto alliance with neo-Nazis and Chechen Islamists-waging a proxy war against Moscow on Russia's border, while a docile media and one-note political class sounds a continuous alarm about Russian aggression?" McConnell asked.

© AP Photo / Dimitri Messinis
The Yugoslav Wars: Story of Serbian Genocide Still Remains Untold
The answer is rather disturbing for the American nation, according to the journalist. The point is that after the end of the Cold War, the United States has found itself as a "sole superpower" with no "external threat."

"If there is no Cold War, the rationale for major [US] programs and initiatives… disappears," Huntington stated.

The academic quoted Gorbachev's adviser Georgiy Arbatov who warned Americans: "We are doing something really terrible to you — we are depriving you of an enemy." The post-Cold War world may deal a heavy blow to the American national identity, Huntington hinted, suggesting that the United States would need a new external enemy to mitigate its internal split.

So, what if "America somehow needs Russia as an enemy for its own sense of self?" McConnell asked rhetorically.