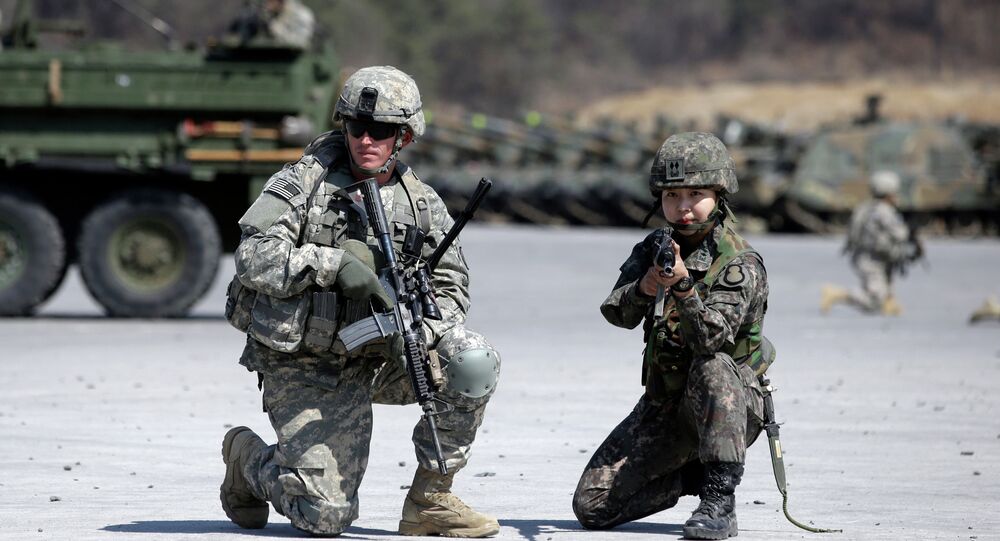 Why is Pentagon Sweating Bullets Over Sino-Russian Alliance?

The Sino-Russian rapprochement is getting on the Pentagon's nerves while the latest SCO and BRICS summits in Ufa have demonstrated the unprecedented new level of strategic understanding between Russia and China, an Indian expert notes.

"If you want to talk about a nation that could pose an existential threat to the United States, I'd have to point to Russia," General Joseph Dunford told the US Senate Armed Services Committee last week.

Dunford's statement would have been dismissed as utter nonsense if these words had not come from the US Joint Chief of Staff nominee.

It goes without saying that the US faces no "existential threat" from Russia, M.K. Bhadrakumar noted. However, it begs the question why the Pentagon has taken such an "apocalyptic view" of the global balance of power.

What is eating the Pentagon?

According to the expert there could be at least three explanations. One could be that Washington is using Russia as a "bogeyman" to increase its military spending and carry out an unprecedented modernization of America's aging strategic triad – ICBM missiles, long-distance bombers, nuclear submarines.

The second explanation of the Pentagon's anti-Russia stance could be that the US has run out of ideas on how to force its NATO allies to spend at least 2 percent of their GDP on buying American weapons. However, Europeans are smart enough not to buy into such a trick.

© REUTERS / SCO Photohost
West Cutting Its Own Throat Pushing Russia Toward China – German Newspaper
"Which brings us to a third explanation: Could it be that the US is genuinely getting nervous about Russia and China and what they are up to lately, and the Pentagon is not really exaggerating?" M.K. Bhadrakumar pointed out.

The expert quoted Russian President Putin who told his Chinese counterpart Xi Jinping at their latest meeting in Ufa: "Combining efforts, no doubt we (Russia and China) will overcome all the problems before us." According to M.K. Bhadrakumar, such a statement has never before been voiced openly at the highest level.

Through "combining" their efforts, which include their decision to integrate the Silk Road Economic Belt and the Eurasian Economic Union initiatives, both Moscow and Beijing are creating a new strong "Heartland" in the territory of Eurasia.

"Suffice it to say, Russia and China have gained such extraordinary "strategic depth" today on the Eurasian landmass that the US' containment strategies toward them have been rendered ineffectual. More than that, the Russian-Chinese entente in Eurasia also means that the two powers can conduct their economic relations with Europe insulated from US interference," the expert underscored.

This new "strategic depth" in Sino-Russian relations has brought into reality the greatest nightmare of the father of British geopolitics, Sir Halford Mackinder, whose views shaped the US postwar foreign policy.

© AFP 2020 / BRICS/SCO Photohos
Russia, China Counterbalance US Hegemony Through SCO, BRICS
The geo-strategist had repeatedly warned against Russo-German rapprochement, saying that such a force may crush the British Empire, while his followers stressed that a Sino-Russian alliance would ultimately hammer the last nail into the coffin of the US global hegemony.

"However, the Chinese high command as well as the Russian also studied Mackinder thoroughly. This is today's Silk Road, integrating for the first time in history the vast untapped resources of Eurasia," American-German strategic risk consultant and lecturer F. William Engdahl notes.

Both Bhadrakumar and Engdahl pointed to the fact that the era of the "American Century" "triumphantly proclaimed by Henry Luce in his famous 1941 Life magazine editorial" is most likely over while its new edition looks "more and more a chimera today."

"It is this sense of profound disquiet in the American mind that finds its reflection in the Pentagon report and in Dunford’s outburst," M.K. Bhadrakumar concluded.