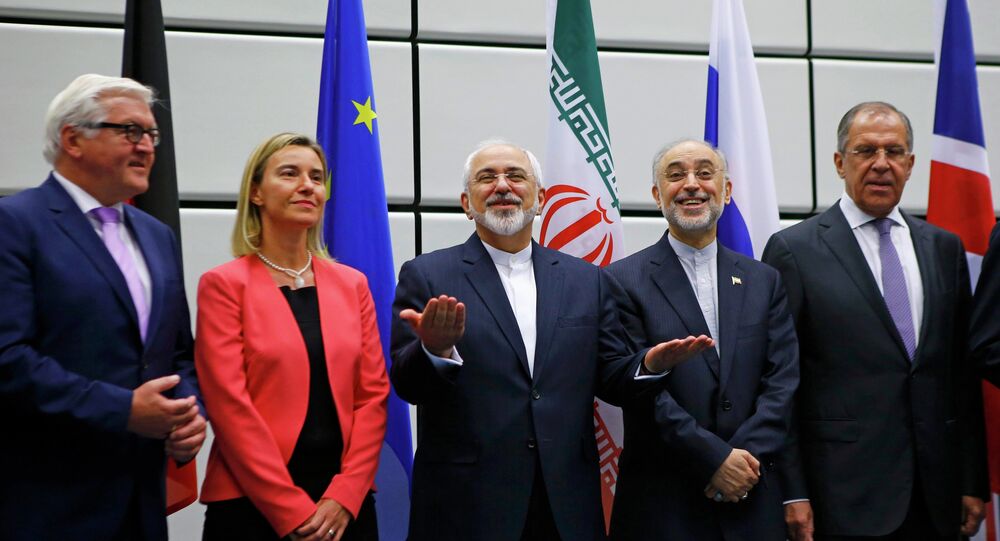 The Russian minister also said that the document on Iran's nuclear program takes into account Moscow's proposals on gradual and mutual realization of the agreement.

Their faces say: "We did it!"/ Их лица говорят: "Мы сделали это!" pic.twitter.com/LBG6B7dtzE

"The final agreement fully achieves the goal that is in accordance with Russia's political vision, which envisages recognizing Iran's right for peaceful nuclear activity, including the right for enriched uranium under the IAEA control, while clarifying all the remaining issues and lifting all sanctions from Iran," Lavrov said.

Tehran and the P5+1 group of international mediators reached a compromise on the lifting of Iran arms embargo, with the deliveries to resume within five years, Russian Foreign Minister Sergei Lavrov said.

The minister pointed out that the deliveries in this period were possible with the UN Security Council verification.

"As for the arms embargo, together with China we have urged for its lifting as one of the first measures that should be stopped. As a result, our Iranian colleagues — they had the last word in this matter, as you understand — agreed to compromise, and since the West initially insisted on the 8-10-year embargo, the Iranian side and the West reached a compromise, that we and China supported, and it suited Iran — five years," Lavrov said.

Some sanctions against Iran over its nuclear program, including those imposed by the European Union, will be lifted immediately after the agreement on Tehran's nuclear program comes into force, Lavrov said.

The deal on #Irannuclearprogram is based on the approach articulated by President Vladimir Putin pic.twitter.com/fuPmaehl17

"A comprehensive action plan on the main document and five specific proposals has been agreed and a UN Security Council resolution project has been agreed too, which all participants of the talks will present as co-authors in New York in the next few days to be considered by the UNSC and to be voted on," Lavrov said at a press conference.

Russia will actively participate in reprofiling Iran's Fordo nuclear facility and the removal of uranium from the country, Sergei Lavrov said.

"Russia will actively participate in the practical activity aimed at the realization of the agreements. It concerns two points directly mentioned in the documents, namely the removal of low-enriched uranium to the Russian Federation in exchange for the delivery to Iran of natural uranium, and it also concerns the reprofiling of the Fordo former enrichment facility as an isotope production facility for medicinal and industrial purposes."

The IAEA will take on new monitoring functions with Russia on Iran's nuclear program; a new joint commission for control over Iran's adherence to the agreement will be created, Lavrov added.

"It's very important that the IAEA is given serious monitoring functions regarding the implementation by Iran of its obligations pertaining to its nuclear program. The Russian side will participate in all stages of the deal realization," Lavrov said at a press conference in Vienna.

© REUTERS / Leonhard Foeger
Historic Deal on Iran Nuclear Program Ends Decade-Long Standoff - Mogherini, Zarif
To do that, "a joint commission is created, which will include the representatives of all talks participants: the P5+1 group, Iran and the European Union," according to the minister.

Lavrov added that the commission would consider any issues that any of the parties may have in regard to the implementation of obligations by other parties.

Lavrov said that the agreement on Iran's nuclear program would have a positive impact on the situation in the Middle East.

"Naturally, the found solution plays an important role in the strengthening of the non-proliferation regime in general. It will surely have a healthy influence on the general situation in the Middle East, North Africa and the Persian Gulf," Lavrov told journalists.

"I'm sure we will strengthen the basis for the continuation and, most importantly, completion of work on gathering a conference on the creation of a zone free from weapons of mass destruction in the Middle East," Lavrov added.

Earlier it was reported that Iran and the P5+1 Group had come to a final agreement on Tehran’s nuclear program after over two weeks of strenuous talks.

The agreement envisages that the UN arms embargo against Iran will remain for another five years. US missile sanctions will stay intact for another eight years. In compliance with a "snapback" plan, sanctions may be renewed within 65 days if Iran violates the agreement.