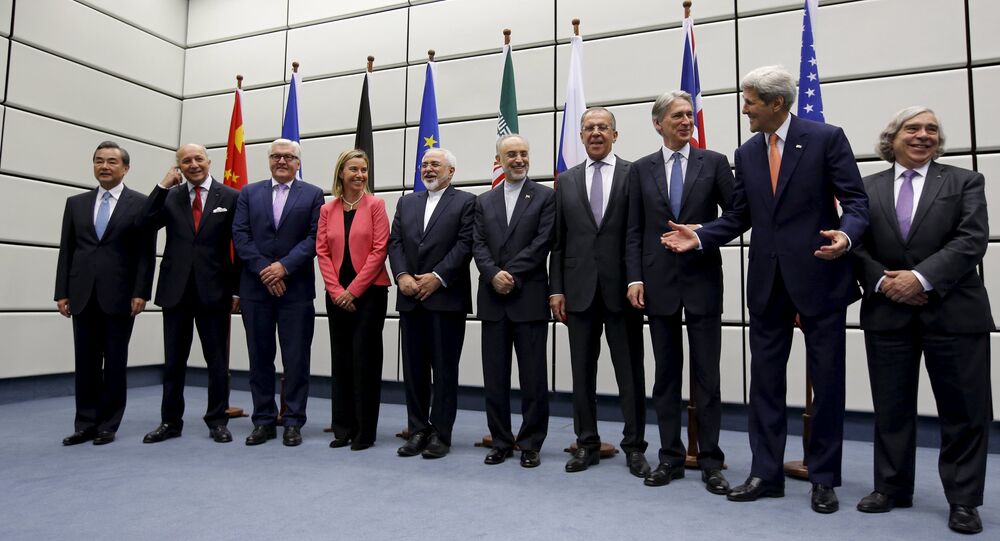 © REUTERS / Carlos Barria
Source: Approval of Final Iran Nuclear Deal to Be Announced at 8:30 GMT Tuesday
VIENNA (Sputnik) – Iran and the P5+1 Group have come to a final agreement on Tehran’s nuclear program after over two weeks of strenuous talks, an Iranian diplomatic source told Sputnik on Tuesday.

"In general, that's it," the diplomatic source close to the negotiations said responding to whether a deal has been reached.

"I congratulate all Iranians. Iran and the P5+1 will announce a comprehensive agreement by 13:00 Tuesday."

The source added the final formal checks are continuing.

The agreement envisages that the UN arms embargo against Iran will remain for another five years. US missile sanctions will stay intact for another eight years. The EU will lift economic and financial sanctions simultaneously with the IAEA verification of Iran fulfilling all agreed steps. The new resolution will be presented to the UN Security Council for approval immediately after negotiations end. Tehran agreed not to enrich uranium over 3,67 percent for 15 years. Fordo has to be turned into a technological center, and its centrifuges will be used for the production of isotopes. In compliance with a "snapback" plan, sanctions may be renewed within 65 days if Iran violates the agreement.

#IranTalks done. We have the agreement. #IranDeal

A nuclear agreement with Iran will become effective 90 days after it is confirmed by the UN Security Council.

"Adoption Day is the date 90 days after the endorsement of this JCPOA [Joint Comprehensive Plan of Action] by the UN Security Council, or such earlier date as may be determined by mutual consent of the JCPOA participants, at which time this JCPOA and the commitments in this JCPOA come into effect. Beginning on that date, JCPOA participants will make necessary arrangements and preparations for the implementation of their JCPOA commitments," the document read.

Iran and the P5+1 will hold meetings on the ministerial level no less than twice a year to assess the fulfillment of the deal. The new agreement replaces previous decisions on the issue. Seven UN Security Council resolutions will be annulled when the agreement comes into force.

"Finalisation Day is the date on which negotiations of this JCPOA are concluded among the E3/EU+3 and Iran, to be followed promptly by submission of the resolution endorsing this JCPOA to the UN Security Council for adoption without delay," the document said.

"This UN Security Council resolution will also provide for the termination on Implementation Day of provisions imposed under previous resolutions," the document read.

The new UN Security Council resolution on Iran will be in force for 10 years.

A joint commission comprising the P5+1 group, Iran and the European Union will oversee the fulfillment of the Iran nuclear agreement.

"Banking activities, including the establishment of new correspondent banking relationships and the opening of new branches and subsidiaries of Iranian banks in the territories of EU Member States; Provision of insurance and reinsurance; Supply of specialised financial messaging services, including SWIFT, for persons and entities set out in Attachment 1 to Annex II, including the Central Bank of Iran and Iranian financial institutions," the document said.

"During the 15 year period, and as Iran gradually moves to meet international qualification standards for nuclear fuel produced in Iran, it will keep its uranium stockpile under 300 kg of up to 3.67% enriched uranium hexafluoride (UF6) or the equivalent in other chemical forms," the document said.

#IranDeal reached in Vienna. Well done to E3/EU+3 and #Iran! Compromise is a major step for global security. History-making achievement

Tehran will have to provide conditions for IAEA presence at its nuclear facilities, including workplaces.

"Iran will make the necessary arrangements to allow for a long-term IAEA presence, including issuing long-term visas, as well as providing proper working space at nuclear sites and, with best efforts, at locations near nuclear sites in Iran for the designated IAEA inspectors for working and keeping necessary equipment," the document said.

Iran will allow the IAEA to conduct monitoring for 25 years and will present all necessary information for that time frame.

Iran will increase the number of International Atomic Energy Agency (IAEA) inspectors in the country to 130-150 within nine months after a joint action plan comes into force.

"Iran will increase the number of designated IAEA inspectors to the range of 130-150 within 9 months from the date of the implementation of the JCPOA, and will generally allow the designation of inspectors from nations that have diplomatic relations with Iran, consistent with its laws and regulations," the document said.

Just now, Iran and @iaeaorg agree to accelerate cooperation with aim to fully resolve all prior issues. #IranTalks pic.twitter.com/MjtKsfCvsO

The EU limits on imports of Iranian oil, gas and exports of EU extraction equipment to Iran will be lifted.

Tehran is obliged to use spent nuclear fuel in medicine and production of industrial radioisotopes for 15 years.

"For 15 years Iran will not, and does not intend to thereafter, reprocess spent fuel except for irradiated enriched uranium targets for production of radio-isotopes for medical and peaceful industrial purposes," the document said.

Iran is obliged not to produce weapons grade plutonium at its Arak facility, while spent fuel should be removed by international mediators.

"The redesigned and rebuilt Arak reactor will not produce weapons grade plutonium. Except for the first core load, all of the activities for redesigning and manufacturing of the fuel assemblies for the redesigned reactor will be carried out in Iran. All spent fuel from Arak will be shipped out of Iran for the lifetime of the reactor. This international partnership will include participating E3/EU+3 parties, Iran and such other countries as may be mutually determined," the document said.

New heavy water nuclear reactors must not be built in Iran for 15 years, with the surplus of heavy water to be accessible for sale.

"There will be no additional heavy water reactors or accumulation of heavy water in Iran for 15 years. All excess heavy water will be made available for export to the international market," the document said.

The renewal of sanctions imposed on Iran for its controversial nuclear program will serve as a basis for Tehran to cease the implementation of its commitments under the nuclear deal.

"Iran has stated that it will treat such a re-introduction or re-imposition of the sanctions specified in Annex II, or such an imposition of new nuclear-related sanctions, as grounds to cease performing its commitments under this JCPOA in whole or in part," the document said.

© AFP 2021 / ATTA KENARE
Iran Works Out Plan for Petrochemical Exports to US After Sanctions Lifted
On Monday, the P5+1 group of international negotiators, including Russia, the United Kingdom, China, France, the United States and Germany, held a ministerial meeting in Vienna to finalize the details of a comprehensive agreement on Tehran’s nuclear program.

Outcome of Iran Talks May Clear Up After Zarif, Kerry, Mogherini Meeting