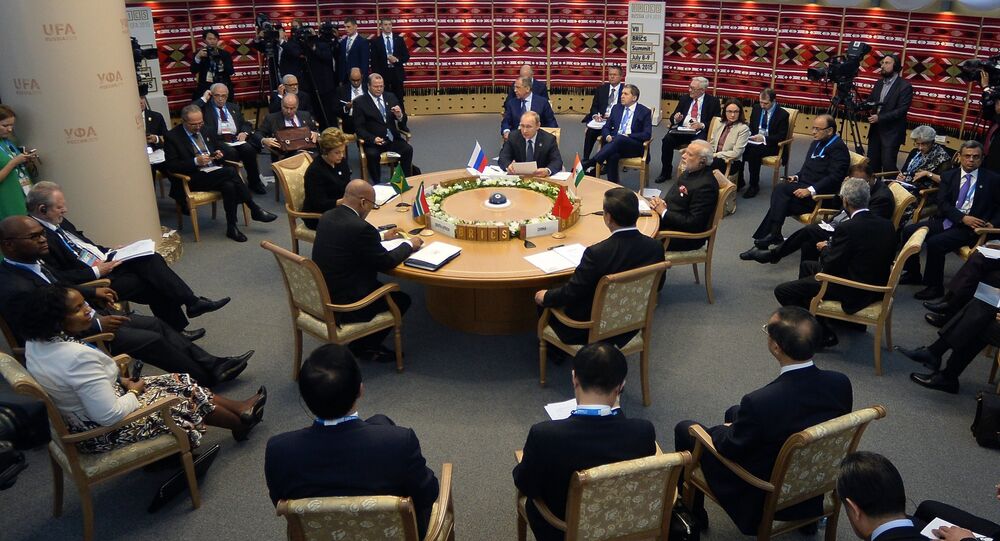 The Shanghai Cooperation Organization (SCO) and the BRICS (Brazil, Russia, India, China and South Africa) are allowing China and Russia to take advantage of shifting global economic interests and successfully counterbalance the US hegemony.

The Shanghai Cooperation Organization (SCO) and the BRICS have transformed into two influential political organizations with the prospect of becoming an alternative to the US-led global system, according to Stratfor.

"Ultimately, both forums enable Russia and China to promote their individual regional interests and their combined interest in countering US dominance in the international system," Stratfor's analysts pointed out.

BRICS/SCO Photohost
BRICS Summit Marks Transformation of Old World Order Into New Reality
The analysts stressed that while Beijing has steered the SCO "toward an economic grouping," Moscow has highlighted the forum's "political role" and "pushed for greater security cooperation."

Furthermore, after including India and Pakistan into the SCO, the expanded organization may create an economic space that could "theoretically" compete with the EU and the US, diminishing their economic leverage, namely sanctions and the dollar-dominated oil market.

On the other hand, the BRICS has been established to use an opportunity of shifting global economic and investment interests with the prospect to become a viable alternative to the US-led global financial architecture. The analysts noted that regardless of certain economic obstacles faced by the emerging powers of BRICS over the recent decade, the group makes up to 20-30 percent of global GDP.

BRICS/SCO Photohost
2015 BRICS Meeting to Cement Russia’s Political Influence in the World - French Media
Meanwhile, "[w]ith the crisis in the Eurozone, instability in Ukraine and disputes in the South China Sea, Moscow and Beijing see both a need and an opportunity to erode US influence by building on their respective strengths through cooperation," the Stratfor report stated.

The analysts also pointed to the fact that the BRICS members have launched the New Development Bank with an initial capitalization of $100 billion.

"Beijing sees the BRICS bank as yet another tool, along with the Asian Infrastructure Investment Bank, to pick away at the US-dominated financial system. With its financial system relatively isolated from the West because of sanctions, Moscow sees the development of alternative institutions as imperative at this time," the Stratfor report elaborated.

It should be noted that Western experts admit that the latest summit in Ufa has obviously marked the transformation of the old world order into a new multi-polar reality.

"The BRICS will now be bolstered by their own institutions that are intended to operate parallel to the US-led order created at Bretton Woods in 1944," Cynthia Roberts, an Associate Professor of Political Science at Hunter College, CUNY (City University of New York) pointed out.

The West is anxiously watching the gradual development of the SCO and BRICS into "more meaningful" organizations, while Sino-Russian ties are strengthening and eliminating the last remnants of distrust.