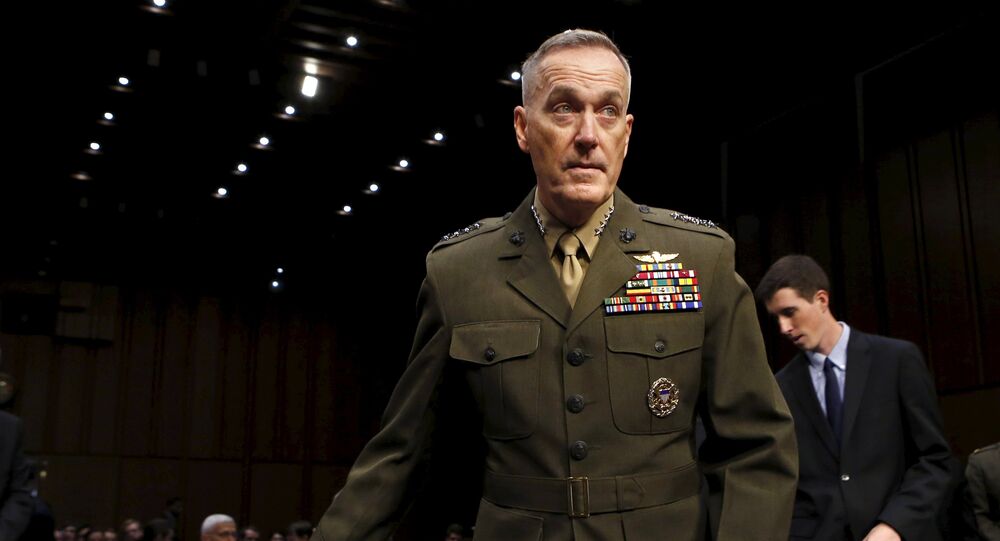 Pentagon on the Warpath: Does Russia Indeed Pose a Threat to US?

US Joint Chiefs of Staff nominee Joseph Dunford has declared Russia to be America's greatest threat this week, and it looks like a well-orchestrated anti-Russia policy, Ron Paul and Daniel McAdams point out.

© AP Photo / Shakh Aivazov
US National Strategy: Washington Has Right to Invade Any 'Non-Ally'
Although Islamic State was the greatest threat to US national security just last week, Pentagon officials have already shifted the goalposts, declaring Russia as America's biggest threat: Marine General Joseph Dunford, nominated to become the next chairman of the Joint Chiefs of Staff, claimed that Russia poses an existential threat to the United States.

"If you want to talk about a nation that could pose an existential threat to the United States, I'd have to point to Russia," Dunford told US lawmakers.

Remarkably, US Air Force Secretary Deborah Lee James has just echoed Dunford's stance and labeled Russia as "the biggest threat" to the US.

© Flickr / kvitlauk
God-Like Power: US Takes Way of Destruction to Come Out on Top
Dr. Ron Paul, a former Republican congressman, and Daniel McAdams, Executive Director of the Ron Paul Institute for Peace and Prosperity, believe that Russia has been faced with a well-coordinated attack from the US "party of war," adding that US Senator John McCain, well-known for his anti-Russia stance, "sort of liked what he heard" from Dunford.

Commenting on the issue, McAdams referred to the newly released Military Strategy of the United States, 2015.

"We also saw a couple of weeks ago the release of the Military Strategy of the United States. And that is also a shift because it focuses away from non-state actors as the greatest threat to the US and refocuses on state actors that are "challenging international norms." And what that means in real terms is that any nation that pursues an independent foreign policy and it's specifically mentioned of Russia, China, Iran, North Korea — these are the greatest threats," Daniel McAdams underscored.

The experts pointed out that although NATO is banging its war drums in Europe only four European nations are actually spending "enough money" — namely 2 percent of their GDP — for buying weapons from the United States.

Meanwhile, the EU major NATO allies, in particular Germany and the UK, are decreasing their defense spending.

"If this was a real threat with the [Russian] tanks going to roll in and take over Eastern Europe there would be a little bit of concern," Ron Paul remarked ironically, adding that in the event of a real Russian invasion European countries would have begging NATO for help.

"They [NATO] say it's military and they say it's defense, but it's buying weapons is what it's all about," Dr. Paul emphasized.

© Flickr / Devin Ford
The New Cold War: No Rules, No Red Lines, No Diplomacy - Stephen Cohen
It is obvious that those who benefit from the EU militarization are US military industries, the experts emphasized.

However, such a warmongering stance will do more harm than good, Ron Paul warned.

"Our policy toward Russia is actually creating an economic climate which may be the threat to the United States. Because if they push too hard Putin, though he does not have a really strong deck he is not bashful [and] he will talk to the Greeks [saying that Greece and Russia could be friends]. He even talks to the Saudis. What if Russians and the Saudis get together? And we've already pushed them [Russians] into the arms of the Chinese and the Indians are going to be sympathetic to that group, not to us [the US]," Dr. Paul noted.

The US' main concern is its economy, according to the experts. If the dollar breaks down, the economic situation in the United States will be dire. However, instead of focusing on its burning domestic issues, Washington is trying to distract the Americans' attention from the forthcoming depression.

It is worth mentioning that US Secretary of State John Kerry has noted he cannot agree with Marine General Joseph Dunford that Russia poses an existential threat to the United States, according to US State Department spokesman Mark Toner.

"The secretary doesn't agree with the assessment that Russia is an existential threat to the United States, nor China, quite frankly. You know, these are major powers with whom we engage and cooperate on a number of issues, despite any disagreements we may have with them," Toner told journalists.

"Certainly we have disagreements with Russia and its activities within the region, but we don't view it as an existential threat," he added.