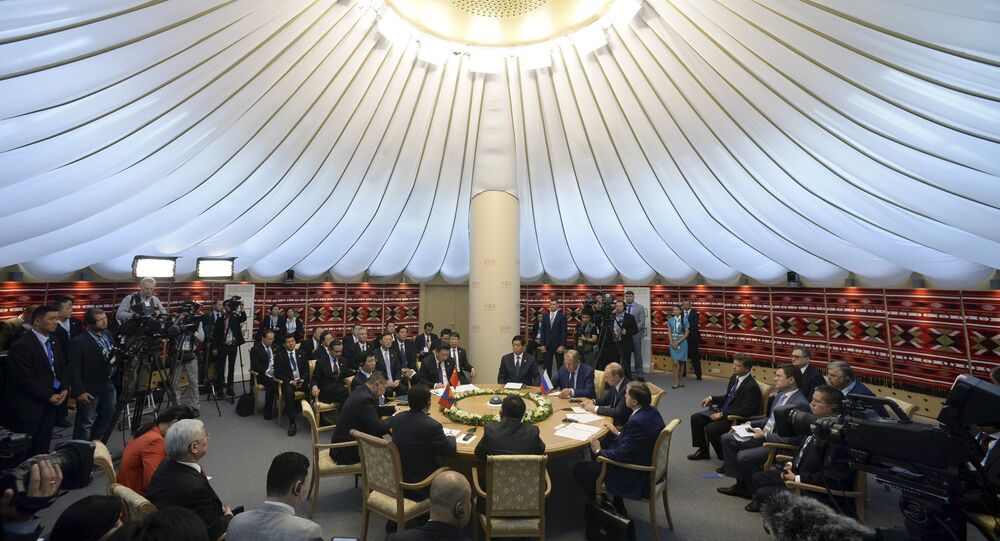 Security in Afghanistan, which is compromised by the rise of extremism in the Middle East, was one of the key issues discussed at the SCO summit held in the Russian city of Ufa, China’s Vice Minister of Foreign Affairs Cheng Guoping told Sputnik.

MOSCOW (Sputnik) – The Shanghai Cooperation Organisation (SCO) currently comprises Russia, China, Kazakhstan, Kyrgyzstan, Tajikistan and Uzbekistan. Afghanistan is an observer state within the organization and, according to Guoping, it has expressed willingness to strengthen security cooperation with SCO member states.

"The SCO will closely cooperate with the Afghan government on the issues of stabilizing the situation in the country, moving forward with the process of.national reconciliation and especially in what concerns cooperation in the sphere of security,"

The SCO summit concluded in the Russian city of Ufa on Friday. The same city was concurrently hosting a BRICS summit.

"Apart from cooperation along UN channels with the aim of actively resolving the Afghan problem, the SCO has already held dozens of meetings. Russia also plays an important role in this respect."

China’s Vice Minister of Foreign Affairs stressed that as terrorist activity and instability spread in the Middle East, the tensions are starting to affect other regions and the problem of security in Afghanistan is becoming more acute.

"This is drawing the close attention of the Shanghai Cooperation Organisation and the situation in Afghanistan was one of the important issues that have attracted the attention of the heads of SCO member states at the summit in Ufa."

SCO leaders reached consensus on a number of issues in Ufa, including the fight against terrorism and maintaining stability in Afghanistan, according to Guoping.

A series of attacks across the country, including last month’s attack on the Afghan parliament building in Kabul, carried out by Taliban fighters, have claimed the lives of several hundreds of people in 2015.

SCO Must Develop Measures to React to Threats Against Member States