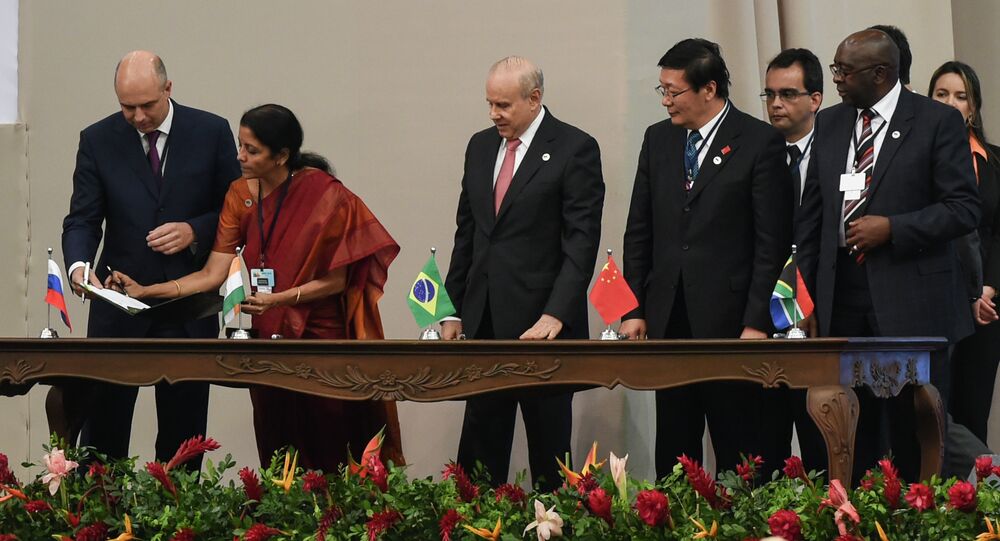 UFA (Sputnik) – The seventh BRICS summit will be held in the Russian city of Ufa July 8-9. On Wednesday, the NDB Governing Board met for the first time ahead of the bank’s official launch which will take place during the summit.

"The idea is that the New Development Bank can support not only BRICS but, in the future, other developing economies, in Latin America, in Africa and in Asia," BNDES President Luciano Coutinho said on the sidelines of the BRICS summit.

The NDB is seen as a rival to the western legacy financial architecture, and Coutinho said he regarded it as a "new complementary source of support for the development of the BRICS economies."

"It is not to replace the existing financial system, but to strengthen and mobilize new sources of finance."

Asked about possible support for European countries, the Brazilian bank president said that the European Union already had strong institutions and development banks, expressing doubt that the NDB would support developed economies that have existing efficient infrastructure.

"Those are the periphery of the European Union. They deserve attention, they are not fully developed economies, and I think the New Development Bank could take action in the future," he said, adding that BRICS five founding members would be first in line to receive assistance.

The agreement on the creation of the New Development Bank with a $100 billion capitalization was signed on July 15, 2014 at the BRICS summit in Fortaleza, Brazil. It will become operational when endorsed by BRICS member states: Brazil, Russia, India, China, and South Africa.