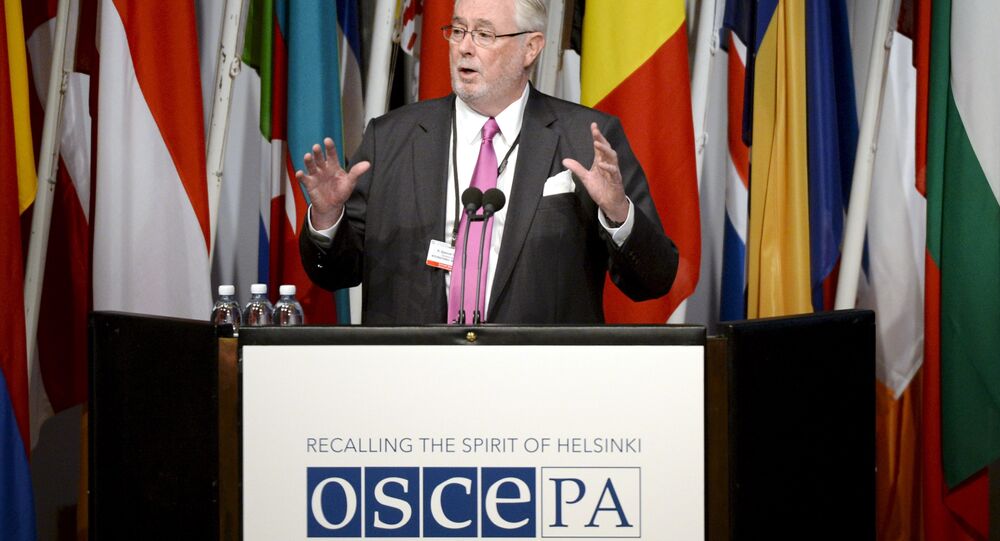 On Wednesday, the full Parliamentary Assembly (PA) of the Organization for Security and Co-Operation in Europe (OSCE) will continue to debate and later will vote on the draft supplementary resolution that condemns Russia’s alleged violations of Ukraine’s sovereignty and territorial integrity since early 2014.

HELSINKI (Sputnik), Svetlana Alexandrova — The resolution was introduced by Ukraine and Canada.

In 2014, after Crimea’s reunification with Russia and the escalation of the Ukrainian crisis, Kiev and several Western countries started accusing Moscow of allegedly meddling in Ukraine’s internal affairs. Moscow has denied these claims and repeatedly stressed that Ukraine coming out of political and economic crisis was in its best interests.

Should the draft resolution in its final form be adopted, it will be appended to the Helsinki Declaration, the final document containing the Assembly's wide-ranging recommendations.

On Sunday, the only delegate from Russia, Nikolay Kovalev, called for the assembly not to breach the PA protocol by reviewing this draft resolution for the second time after it was approved during the session of the OSCE Parliamentary Assembly in the Azerbaijan’s capital of Baku in 2014.

An OSCE Parliamentary Assembly meeting in Helsinki is taking place on July 5-9. The Russian delegation decided to refrain from participating in the summer session after Finnish authorities denied travel visas to several members of the Russian delegation set to participate in the OSCE PA, including Russian State Duma Speaker Sergei Naryshkin, who is on the EU travel ban list of persons accused of alleged involvement in the Ukrainian crisis.

Crimea and Sevastopol rejoined Russia in March 2014 after 96 percent of residents voted for reunification in a referendum.

Sanctions Against Lawmakers to Be Reconsidered at Next OSCE PA Session