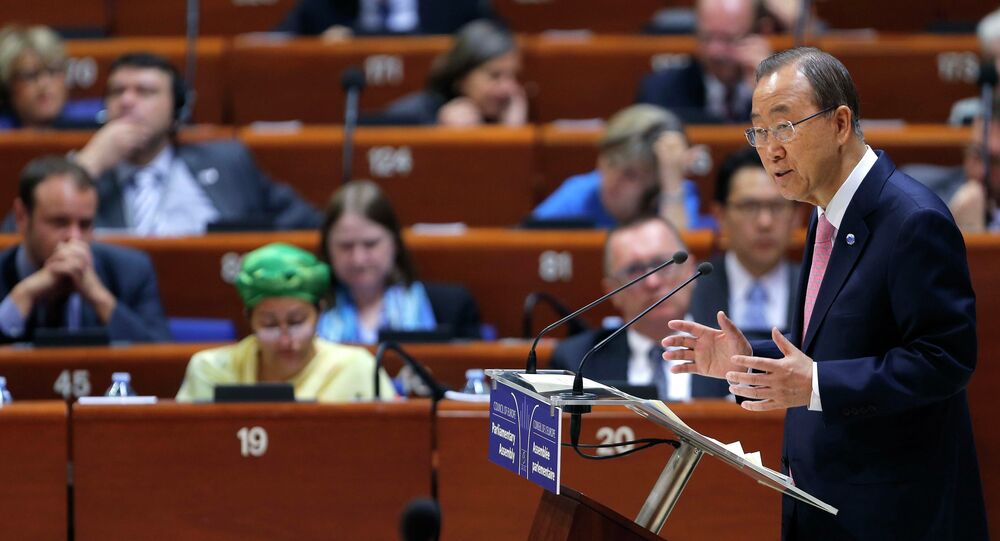 UN Secretary-General Ban Ki-moon has claimed that plane crash that killed former Secretary-General Dag Hammarskjold in 1961 should be re-investigated, as new evidence pertaining to the accident has been uncovered.

© REUTERS / Vincent Kessler
Ban Ki-Moon Urges Council of Europe to Fight Religious Extremism
A panel appointed by Ban revealed new information suggesting that the plane transporting the second Secretary-General of the United Nations to Katanga, part of present-day Democratic Republic of Congo, may have come under an aerial attack. The plane crashed in Northern Rhodesia, now Zambia, taking lives of 15 people along with Hammarskjold.

"The panel ultimately found significant new information that it assessed as having sufficient probative value to further pursue aerial attack or other interference as a hypothesis of the possible cause of the crash," Secretary-General Ban wrote in a letter to the General Assembly released on Monday.

Specific information about the 1961 plane crash was requested from Belgium, France, Germany, South Africa, the United States and Britain by the three-member panel, which said not all of its requests were satisfied.

"further inquiry or investigation would be necessary to finally establish the facts" #UNSG on Dag Hammarskjöld report http://t.co/vhVuMZzZqO

The panel asked for access to all "classified material and information held by Member States and their agencies that may shed further light on this fatal event and its probable cause or causes," to uncover the “whole truth” about the tragedy.

© Sputnik / Iliya Pitalev
UN Chief Calls for Probe Into Palestinian Minister's Death, Urges Restraint
There have been several theories surrounding the death of Hammarskjold, and the panel determined that neither sabotage using explosives, nor hijacking were fully credible.

The fresh information included eyewitness testimony, some of which claimed there were two planes in the sky, or that Hammarskjold’s aircraft was on fire before it hit the ground.

Addressing a theory about crew fatigue, the panel said that it “does not, in and of itself, explain the cause of the crash or the extent, if at all, to which fatigue was a contributing factor to the crash.”

Ban called on officials of all involved states to “disclose, declassify or allow privileged access to the secretary general to information they may have.”