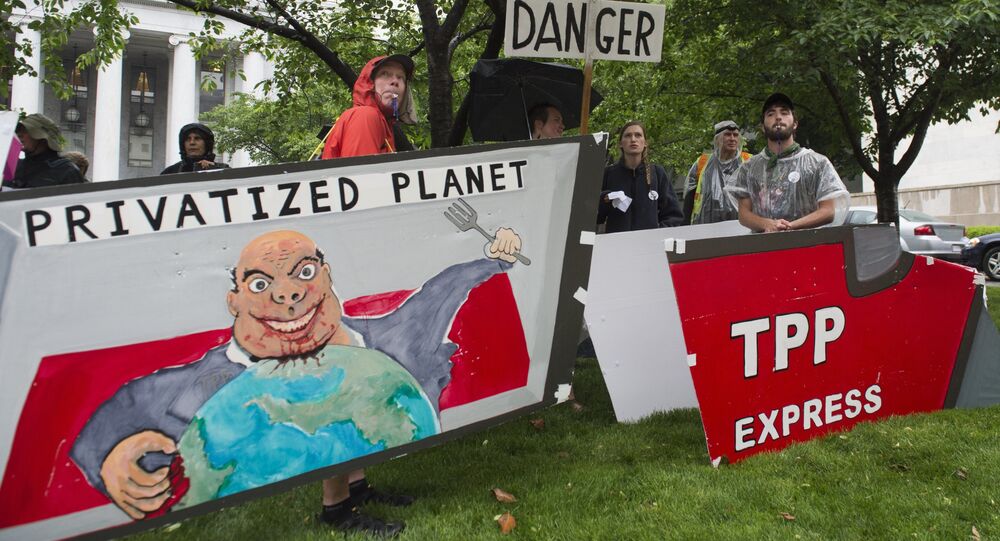 The Trans-Pacific Partnership (TPP) is not just an ordinary trade deal: it is meant to undermine China's positions in the Asia Pacific and strengthen Washington's hegemony in the region for decades to come, US expert Sean Mirski explains.

© AP Photo / Carolyn Kaster
Obama: US Should Set Rules for World Economy
The Trans-Pacific Partnership (TPP) is not just about trade: the deal will alter the balance of power in the Asia Pacific strengthening Washington's positions in the region for decades to come, US expert in international affairs Sean Mirski asserted.

"In short, then, the TPP has been presented and criticized as if it were an ordinary trade deal. It's not. The treaty boasts strategic consequences that make it well worth passing," the expert stressed.

"If the TPP can change the trajectory of American power relative to China's, it may be the single most important factor in whether the United States retains its "indispensable" role in the 21st Century," he elaborated.

© Flickr / Andrew Albertson
Australian Parliament Slams TPP, Calls it an 'Attack on Internet Freedoms'
According to the expert, those who oppose the deal are making a grave mistake, "dismissing the strategic consequences of the treaty for America's continued primacy in the Asia-Pacific."

Mirski argues that without the TPP the United States would eventually cede its dominant political and economic positions in the region to its "primary geopolitical rival" — China.

"In order to preserve American primacy in the face of a rising China, American strategists seem forced to choose between two options that are both extremely unpalatable: containment and integration."

However, the TPP "offers a third option:… the United States should build up its own strength (as well as the strength of its Asian allies) in order to maintain a balance of power in the Asia-Pacific that is favorable to continued American primacy," the expert revealed.

© AP Photo /
WikiLeaks: EU Diplomat Interpreted US TPP as Hostile to China
The United States should hurry up, since China has begun to develop "an alternative set of global institutions," threatening the Washington-backed Bretton-Woods system, according to the author.

Furthermore, the expert insisted that "China and Hong Kong would lose out $47.5 billion [by 2025] from being excluded from the [TPP] agreement, since it would divert trade flows away from them and toward TPP countries," while Washington will enjoy "a net $77.5 billion increase" in income.

The expert criticized those who hesitate to grasp such an opportunity, stressing that it is "shocking" that the deal "almost met its end" in the US Congress.

"[C]ongressional Democrats, environmental organizations, and labor unions have closed ranks to present a united front against the TPP. They argue that it will line the pockets of corporations while draining much-needed jobs from the American economy," he noted.

© Flickr / rj_schmidt
US Senate Hastens TPP by Approving 'Fast Track' Intl Trade Authority
Indeed, the 12-nation TPP has faced heavy criticism in the United States. Some critics argue that the agreement will play into the hands of the Wall Street magnates and multi-national corporations and will deal another heavy blow to America's waning middle class.

"The multinational corporations… embrace an approach that allows them to move factories and jobs from country to country in order to lower wages and avoid labor, environmental, and human-rights regulations," US political blogger John Nichols wrote a month ago, stressing that together with the American Legislative Exchange Council they are now pushing ahead the TPP.

However, it seems that Washington's political establishment is too preoccupied with its rivalry with China to take into consideration its burning domestic issues, such as the economic well-being of its middle class, workers and farmers.