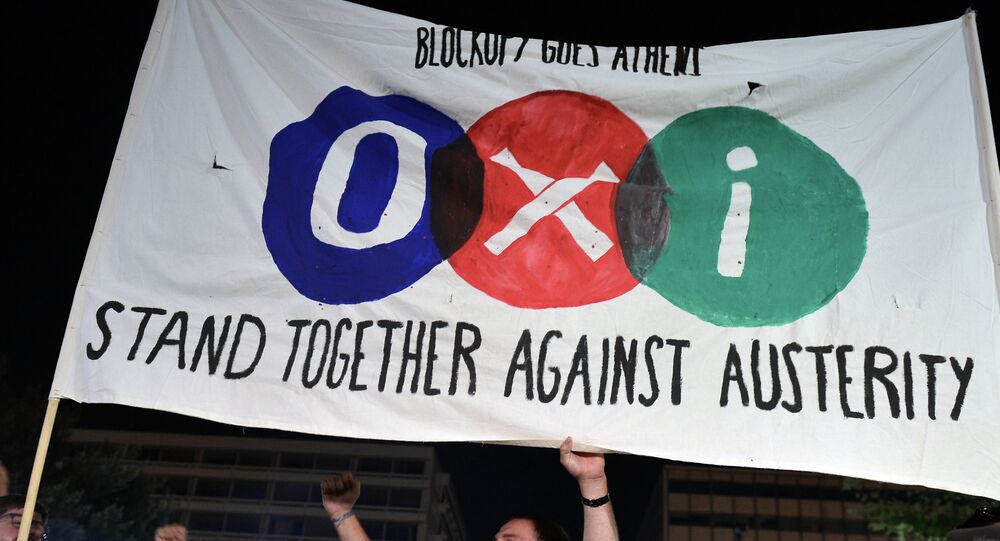 The Greeks decision to democratize economic decision making was not only right, it was necessary, US political blogger and publicist John Nichols notes, adding that Athens is fighting for more than just an alternative to austerity.

Greece's referendum vote on austerity terms has become a struggle to renew democracy, American political blogger and publicist John Nichols emphasized, stressing that the Syriza party and the government have won on those terms.

"Tsipras argued that the Greek people had a right to vote for a future that was different from the one dictated by distant bankers and bureaucrats," the publicist underscored.

Fotohost agency
Greece Can Join BRICS as a Growing Economy - Official
According to Mr. Nichols, a crisis is also an opportunity: the people of Greece voted for developing a "more humane and functional" economics, based on growth and economic responsibility, instead of failed austerity policies.

"The rising crescendo of bickering and acrimony within Europe might seem to outsiders to be the inevitable result of the bitter endgame playing out between Greece and its creditors. In fact, European leaders are finally beginning to reveal the true nature of the ongoing debt dispute, and the answer is not pleasant: it is about power and democracy much more than money and economics," Nobel Prize-winning economist Joseph Stiglitz elaborated as cited by the publicist.

"I applaud the people of Greece for saying 'no' to more austerity for the poor, the children, the sick and the elderly. In a world of massive wealth and income inequality Europe must support Greece’s efforts to build an economy which creates more jobs and income, not more unemployment and suffering," said Vermont Senator Bernie Sanders, a contender for the 2016 Democratic presidential nomination.

© Sputnik / Igor Zarembo
German Hypocrisy: Never Repaid Own Debts, Forces Others to Pay Up
The author pointed out that "in an age of corporate globalization" and "immense pressure on nation states," the battle over Greece's future "has raised fundamental questions about the state of democracy."

The question is whether the people of a sovereign state have the right to determine their future themselves, or whether that right must be ceded to powerful distant bankers and corporatocracy.

"Much of the media in the United States portrayed the decision by Tsipras and his ministers to bring the people into the process as madness-operating on the assumption that great economic decisions can only be made by great economic powers and their mandarins," John Nichols pointed out.

© AFP 2020 / Sakis Mitrolidis
Bankrupt Capitalism: The Real Greek Verdict
However, it should be the people, not distant traders and bankers, who decide, the publicist argued. The Greeks have made a bold attempt to democratize economic decision making. It was not just good and right, it was absolutely necessary, the author underscored.

"The strangling grip of austerity will not be broken with back-room deals and closed-door negotiations. It will be broken by citizens making clear that they will no longer stand for a regimen that imposes brutal cuts on working families in order to preserve the wealth of billionaires and the authority of central banks," John Nichols emphasized.

True democracy is non-negotiable, and the Greek government has clearly demonstrated that, the publicist noted, adding that Greece, the country that gave birth to democracy many centuries ago, is now fighting for its eternal and fundamental values.

"And Greece is being cheered on in that fight by those who recognize that another world is possible-and necessary," Mr. Nichols stressed.