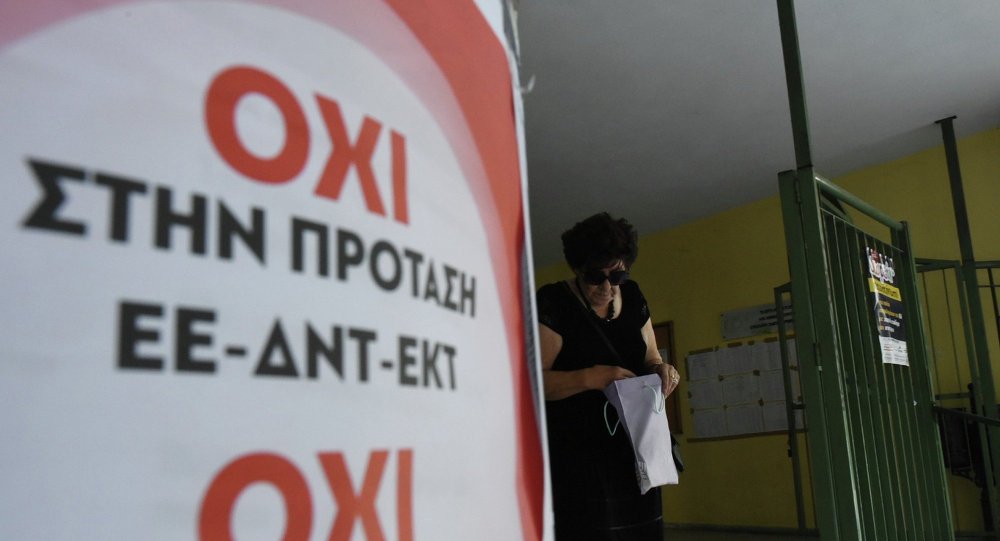 Germany is Solely to Blame for Grexit – Spanish Newspaper

Responsibility for Greece’s exit from the Eurozone lies solely on Germany if the Greeks decide not to accept the creditors’ proposals and vote “No” at Sunday’s referendum, Spanish newspaper El País wrote.

If Greece exits from the Eurozone, the situation in Europe will change radically, as before Europe used to overcome crises through negotiation and respect of the interests of the weaker countries, Soledad Gallego-Díaz noted.

“Europe has always considered the fact that Germany becomes the ‘guardian of our [European] essences’ as bad news. Even worse [news] if it is accompanied with France’s disappearance as a counterweight.”

No one asks France’s opinion, as well as that of Italy and the UK during the Eurogroup’s meetings, the newspaper said, adding that this means that the European balance of power has changed and currently Germany is the main decision maker.

© AP Photo / Giannis Papanikos
'Nai' or 'Oxi'? Voting Ends in Greece's Bailout Referendum
The Spanish journalist draws attention to the danger of "a new phase of the Cold War" in the event that Germany continues to take the lead in the European Union.

Commenting on the situation in Greece, Soledad Gallego-Díaz asked whether the EU was able to agree with those who want to change its rules, especially when preserving them means that the existing dogmas only significantly increase inequality.

Soledad Gallego-Díaz believes that the failure of the European Union’s strategy in terms of compliance with its social and political commitment cannot but cause concern despite any outcome of the Greek referendum.