The UN resolution could last for a certain period of time and has to be extended upon expiry unless Iran violates nuclear deal commitments. 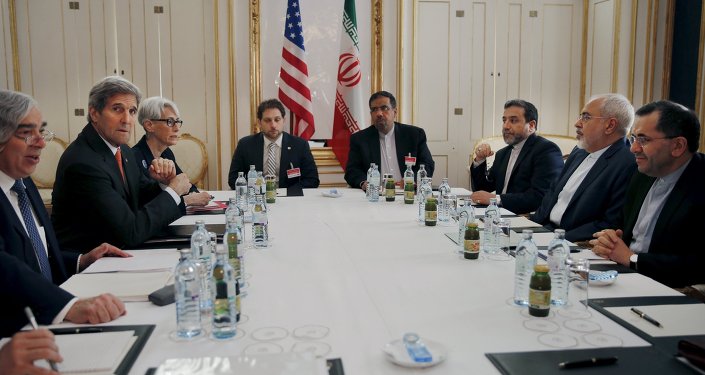 © REUTERS / Carlos Barria
Iran Nuclear Deal Still Being Drafted, to Be Approved as Package
VIENNA (Sputnik) — The adoption of a time-limited resolution by the UN Security Council on lifting sanctions against Iran is one of the options discussed by the P5+1 and Iran, an Iranian diplomatic source told Sputnik Wednesday.

The UN resolution could last for a certain period of time and has to be extended upon expiry unless Iran violates nuclear deal commitments.

"This is one of the options at the negotiating table," the source said.

"Nothing is decided until everything is decided. This phrase has already become a common place, but it reflects the current situation," the official added.

"Up to now there was no overall agreement [on the UN resolution and sanctions relief mechanism]. Everything should come as a final package," he stressed.

The UN Security Council has introduced harsh anti-Iran economic sanctions over Tehran's alleged development of nuclear weapons under the guise of a civilian nuclear program. The Islamic Republic has repeatedly denied the claims, insisting on the peaceful nature of its nuclear-related activities.

In April, Iran and the P5+1 international negotiators from Russia, China, France, the United States, the United Kingdom and Germany, agreed on a framework deal to allow Tehran to maintain a peaceful nuclear program and get gradual relief of sanctions in exchange for a pledge to curb uranium enrichment and decrease the number of centrifuges.

The deadline for reaching a comprehensive agreement on Iran’s nuclear program was set for June 30, but the negotiators agreed to extend the talks until July 7.