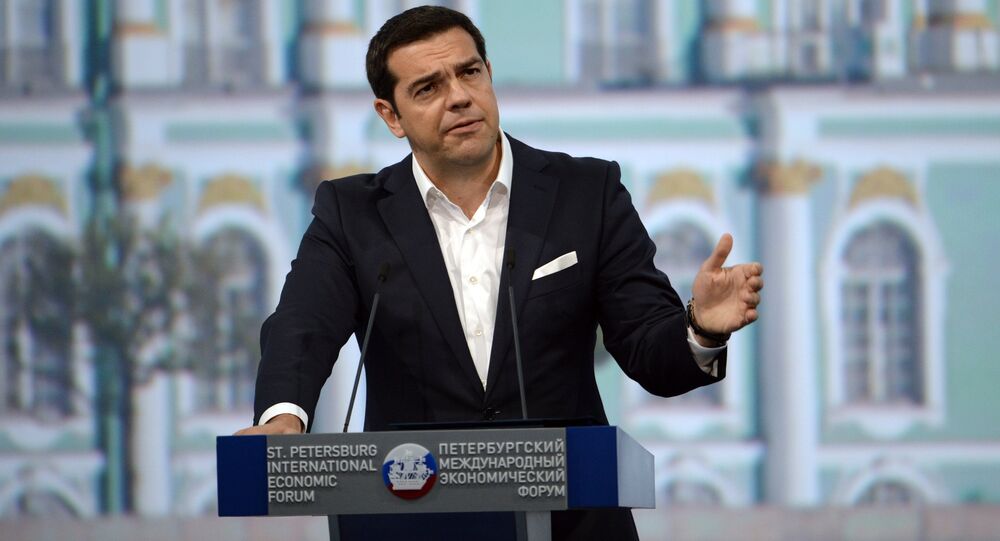 MOSCOW (Sputnik) — Greek Prime Minister Alexis Tsipras said that a referendum on whether to accept an accord for a new bailout with its creditors will be held on July 5.

Greeks will be asked to give a simple "yes" or "no" vote on whether they will accept tax rises and pension cuts amounting to 8 billion Euros that the EU, ECB, and IMF have set as a condition for desperately needed bailouts to keep the debt-stricken country afloat.

"After five months of hard negotiations our partners, unfortunately, ended up making a proposal that was an ultimatum towards Greeks democracy and the Greek people," Tsipras said in a televised address to the nation. "We have been presented with an ultimatum, and it is the historic responsibility of our country and people to answer this ultimatum."

Earlier in the day, Tsipras held an urgent cabinet meeting.

In his televised address, he also said that an extraordinary session of Greece’s parliament is due to discuss holding of the bailout deal referendum on Saturday.

German Chancellor Angela Merkel, French President Francois Hollande as well as the ECB chief have already been informed of the plan, Tsipras added.

The meeting on Greece's debt settlement scheduled for Saturday, which is expected to finalize months-long intricate negotiations.

Athens is currently in talks with its major international creditors — the International Monetary Fund (IMF), the European Union and the European Central Bank (ECB) — seeking to unlock financial aid to avoid a default on its multibillion-dollar debt before the current bailout program expires on June 30.

In return for the financial aid, the creditors stipulated that Greece should fulfill certain demands, including austerity measures and cuts in social benefits, continuous monitoring of the Greek economy by the lenders and unpopular economic reforms.

Greece: Bail Out or Fall Out