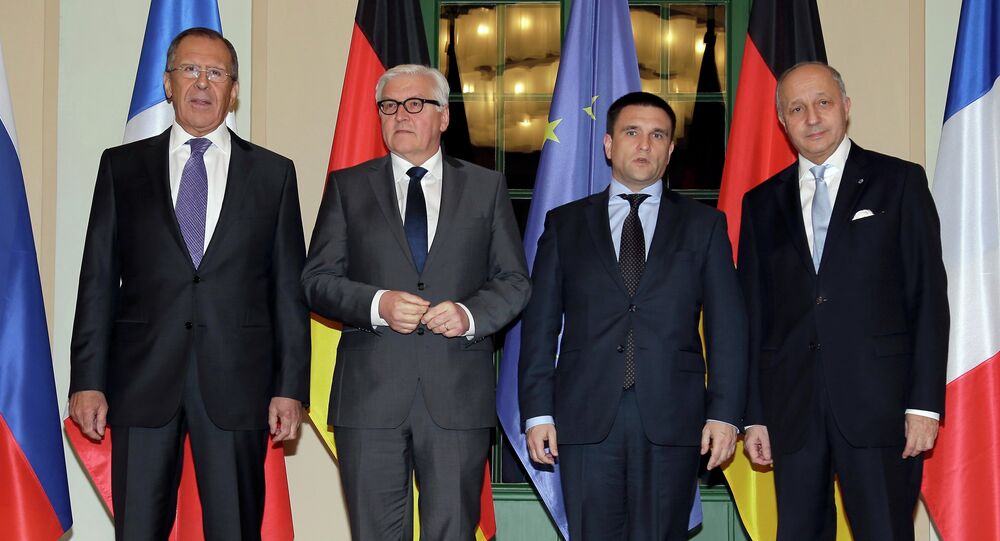 Foreign ministers of the so-called Normandy Four group, made up of Ukraine, Russia, France and Germany, will come to Paris on Tuesday to assess the progress on the Minsk ceasefire deal for Ukraine.

MOSCOW (Sputnik) — It will run parallel with a meeting of the so-called Trilateral Contact Group – an assembly of envoys from Russia, Ukraine and the Organization for Security and Co-operation in Europe (OSCE) – that will gather in the Belarus capital Minsk. New additions will be a Red Cross official and OSCE’s new envoy Martin Sajdik, of Austria.

Ahead of the meeting, the four ministers held a phone conference where they agreed to discuss ways to enforce the February 12 peace agreement on warring parties with the help of the Contact Group, including a direct dialogue between Kiev and the breakaway regions of Donetsk and Lugansk in Ukraine’s east.

German Foreign Minister Frank-Walter Steinmeier said ahead of the Paris talks there was a growing number of peace treaty violations reported in eastern Ukraine in the past two days, and the situation had to be brought under international control.

© AFP 2020 / SERGEY BOBOK
US ‘Obsession’ With Arming Ukraine Comes at Expense of Economic Assistance
The meeting will take place against a backdrop of strained relations between Russia and the European Union, whose foreign policy chiefs voted on Monday to extend sanctions against Moscow until the end of January 2016.

Brussels tied the lifting of the 2014 sanctions – which were imposed on Russian officials, as well as energy, military and banking sectors – to progress on Ukrainian reconciliation as stipulated by the latest Minsk peace deal, hammered out by presidents of Russia, Ukraine, and the two EU leaders in the Belarusian capital in February.

© Sputnik
US Welcomes EU Extension of Sanctions Against Russia
Ahead of Tuesday’s meeting, Russian President Vladimir Putin shared his opinion of the crisis in Ukraine in a phone call with France’s Francois Hollande and German Chancellor Angela Merkel, the three other leaders who set the "Normandy Four" trend by first meeting to discuss the Ukraine crisis last year on the sidelines of the Allied Normandy Landing celebrations in France.

According to Putin’s spokesman Dmitry Peskov, the four heads of state had no immediate plans to hold another summit as ceasefire violations continued.

Tuesday’s ministerial session will be overshadowed by new reports of artillery fire in and around the east Ukrainian city of Donetsk.

A report by OSCE’s Special Monitoring Mission in the region, which was published Monday, said monitors had observed over 500 explosions in the area over weekend. It said heavy weapons had been spotted at positions belonging to both Ukrainian troops and militias, in what the SMM said was a violation of Minsk withdrawal lines.

Kremlin Ready for Ukraine Talks in Any Format for Reconciliation Progress

Permission From Ukraine for Tourists to Visit Crimea 'Absurd' - Kremlin