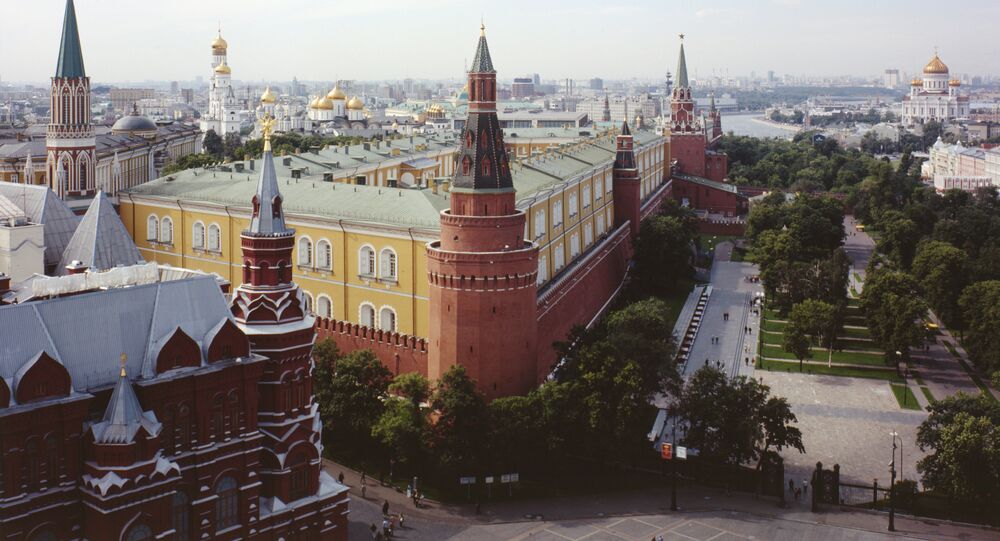 The West is up in arms about Moscow's success in its use of so-called "information warfare," racking its brain over the question on how to outstrip the Russian media both in international and regional competition.

© AP Photo / Evan Vucci, File
Man of Integrity vs Man of Lies: Unlike Obama 'Putin Says What He Means and Means What He Says'
A new propaganda war on Russia, declared by Washington and Brussels this year, has not yet brought any tangible results and the prospect that it will prove effective in the future is as well rather bleak.

Russia's media sources have turned the spotlight on the Ukrainian crisis shaping not only Russian views of the conflict, but even affecting "the conversation in Western Europe and the United States," US journalist Brittney Lenard pointed out.

"Through social media, television, and billboards, Moscow has advanced its agenda in new and often sophisticated ways that bear little resemblance to the overdone propaganda of the Cold War," the journalist elaborated.

© Sputnik / Alexei Danichev
US Threats to Tighten Sanctions on Russia Nothing But PR - US Businessman
Indeed, Russia's media commitment to "questioning more" and "telling the untold" has already dealt a serious blow to those Western media outlets which are turning a blind eye to a number of Ukrainian issues regarded as "inconvenient" and diverting public attention from the actual problems of the post-Soviet country.

While the US and European media outlets and tabloids have never missed an opportunity to criticize Russia, focusing on its domestic affairs, Lenard accused Russia's media of covering the US' internal problems, namely, the Ferguson and the Baltimore riots.

© Sputnik / Alexei Danichev
War of Words Does Not Mean Real War is Close at Hand - Putin
On the other hand, according to the journalist, it is the Russian media's fault that Russian views of the West have recently reached its lowest points. However, the devil is always in the details. Lenard has apparently forgotten that the West has itself contributed to the situation a lot.

The controversial role of Brussels and Washington in the February 2014 coup in Ukraine, carried out by ultra-nationalist militants, the West's attempts to silence Kiev's atrocities in eastern Ukraine and groundless finger-pointing at Moscow when the Malaysian MH17 flight was downed, have predictably alienated Russians from the West. Moreover, the call by retired US Army major general Robert H. Scales to "start killing more Russians," broadcasted by a US mainstream TV channel, has not made matters any better.

However, the West persists in blaming what it calls "the Russian propaganda," racking its brain ways to deal with this thorn in its side.

"Russian propaganda's power lies not only in its effect on its audience, however, but also in the uncomfortable position in which it puts the West," the journalist noted.

© Flickr / Official U.S. Navy Page
Again? US Destroyer to Enter Black Sea Sunday to Support Atlantic Resolve
The West obviously cannot ban the Russian media sources, since it will be regarded as a blatant violation against the freedom of speech and expression of fundamental values, she stressed, adding that "by design or not, Moscow has succeeded in putting leaders and policymakers in Washington and Brussels in a serious bind."

As a part of the "information warfare," Western journalists and observers should "continue to push for access to conflict areas" in Ukraine, in order to "report the reality on the ground," the journalist underscored. The West should counter Russia "with the unvarnished truth" about what is going on in Ukraine, she believes. Although it may not lead to the results the West is expecting, the idea to expose the truth about the Ukrainian turmoil is undoubtedly a step in the right direction.