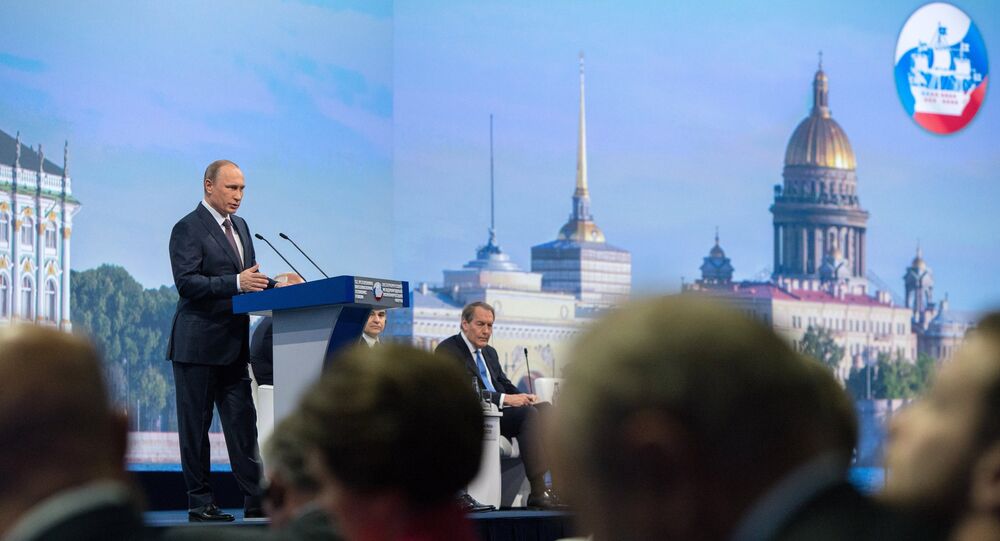 Global decisions, such as the US exit from the Anti-Ballistic Missile Treaty, push Russia into the new round of arms race, Russian President Vladimir Putin said at the ST Petersburg International Economic Forum Friday.

MOSCOW (Sputnik) — The ABM Treaty between the US and Russia was aimed at avoiding a strategic imbalance, however, Washington withdrew from the Anti-Ballistic Missile (ABM) Treaty, signed with the former Soviet Union in 1972 that was aimed at limiting the number and capabilities of both countries’ ABM sites.

Following the move, Washington significantly expanded the development and the number of its missile defense systems in Central and Eastern Europe.

"Local military conflicts do not lead to the Cold War, but global decisions do, such as the US unilateral exit from the Anti-Ballistic Missile [ABM] Treaty. This really is a step which pushes us towards the new round of arms, as it changes the global security system."

© Sputnik / Iliya Pitalev
Countering Russian Strategic Missile Threat Too Hard, Costly for US
According to Vice Chairman of the US Joint Chiefs of Staff Admiral James Winnefeld, the United States will install the Aegis Ashore Ballistic Missile Defense (BMD) system in Romania, completing Phase 2 of the European Phased Adaptive Approach by the end of 2015.

The BMD systems were previously limited under the Anti-Ballistic Missile (ABM) Treaty.

Putin: Russia Ready to Cooperate With West Despite Work With BRICS