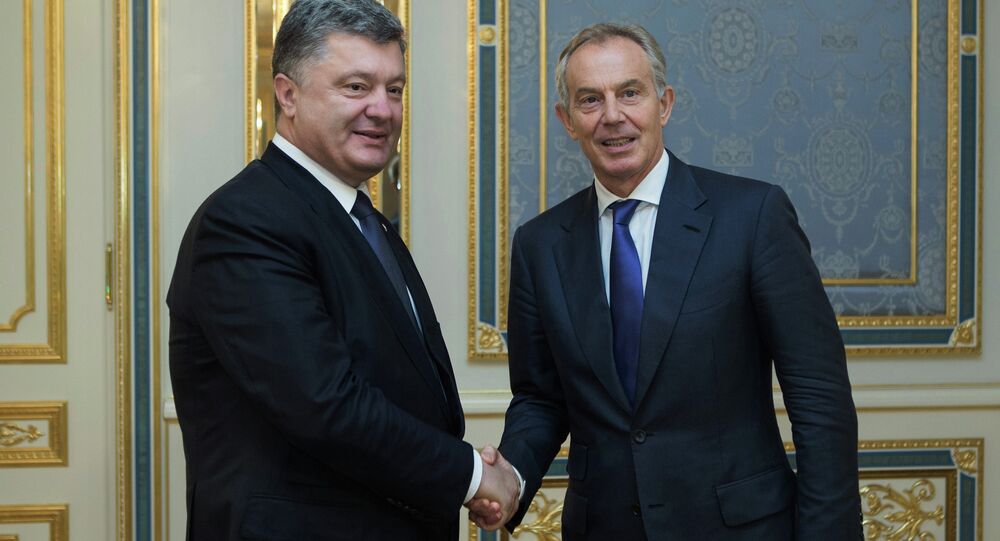 Ukrainian President Petro Poroshenko can't seem to get enough of foreign advisors telling his government how to carry out reforms, this time offering former British Prime Minister Tony Blair a job in his International Advisory Council for Reforms, a press release on the president's website reported.

The press release, issued Wednesday, noted that the former prime minister had been invited "to share his experience of public administration" within the council, headed by corruption-mired former Georgian President Mikheil Saakashvili, who has since moved on to become governor of the Odessa Region.

"I discussed with Tony Blair the experience of reforms and state management. Despite the war, we have the opportunity to conduct reforms!"

Poroshenko met with the former prime minister in Kiev. Blair, who served as prime minister between 1997 to 2007, called on the Ukrainian government to follow the values of "freedom, democracy and a desire to serve the people," adding that the country faces "great challenges" including  corruption and "Russian aggression."

Saying that he was asked by the former PM "exactly what help was needed from the international community," Poroshenko declared that "this is the approach of a true friend of Ukraine." He noted that "despite war, we have an opportunity to implement reforms," adding that Ukraine was "united as never before" in its commitment to the European choice. Poroshenko recalled that Blair had stepped out in support of Ukrainian EU membership following the so-called Orange Revolution of 2004-2005.

At the end of June, Blair is set to step down as the Middle East envoy representing the Quartet of Middle East power brokers, a foursome of nations and supranational entities involved in mediating the Israeli-Palestinian peace process. Blair had held the role since 2007, when he resigned as prime minister. Russia criticized his candidacy prior to his appointment, citing Blair's decision to join the US in its war on Iraq in 2003, and pointing out that the allegations over Iraqi weapons of mass destruction used to justify the war had turned out to be false. Blair's achievements in his role as mediator have proven negligible, with Israel launching three military operations in Gaza following the collapse of peace talks.

Blair has yet to comment on whether he would accept Poroshenko's offer, but social media users have already voiced their shock and disapproval over the decision.

If I have nightmares about Tony Blair tonight, that'll be your fault Pres @Poroshenko! pic.twitter.com/wGu3BfTj09

"These are the 'little details' which emphasize the difference in understanding when it comes to the future plans of Russia and Ukraine: 'Poroshenko has invited Tony Blair into his council on reforms."