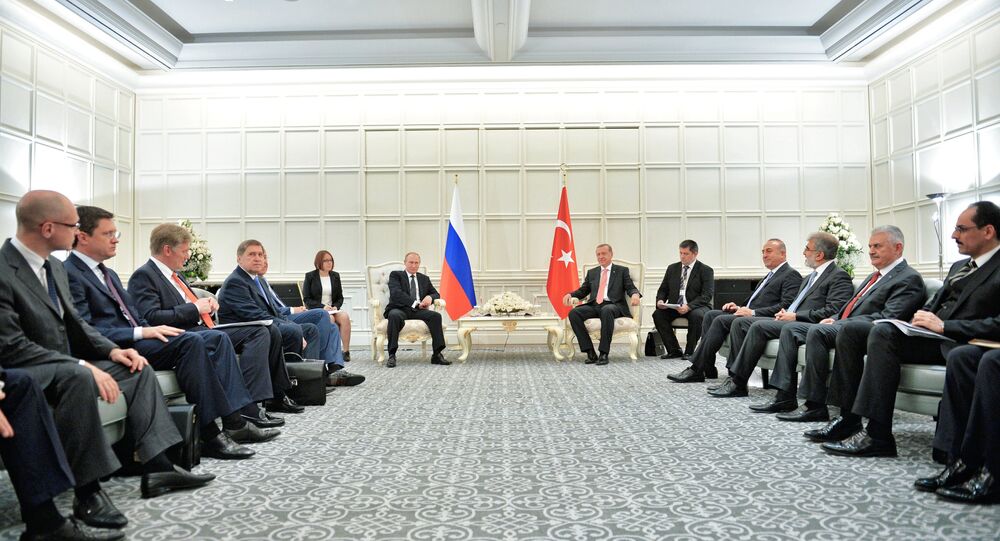 Earlier in the day, the presidents held bilateral talks behind closed doors on the sidelines of the first European Games in Baku.

"[They] discussed in details the construction of a nuclear power station, outlined the existing issues. These are technical problems that always accompany large-scale construction projects. Different major projects in the energy dialogue have been discussed. [They] exchanged views on current key international issues, including Ukraine," Peskov told reporters.

"The Turkish Stream [project] was discussed, as well as other functioning [gas pipeline] routes."

© Sputnik / Ilya Pitaliov
More Than Hot Air: Europe, Russia Will Have to Discuss Turkish Stream Gas Pipeline
The Turkish Stream is a substitute for the South Stream pipeline project, which Moscow dropped in December 2014, citing an "unconstructive" stance of the European Union.

The same month, Russian energy giant Gazprom announced the construction of the Turkish Stream pipeline, which will run across the Black Sea from Russia to Turkey. The planned annual capacity of the pipeline is 63 billion cubic meters of gas, according to Gazprom. The pipeline is due to become operational in December 2016.

"Mutual intention not to give up the earlier declared goal to reach a $100-billion turnover in foreseeable future was confirmed."

The Turkish leader informed his Russian counterpart on the political situation in Turkey and perspectives of forming a new government following last week's general election, according to Peskov.