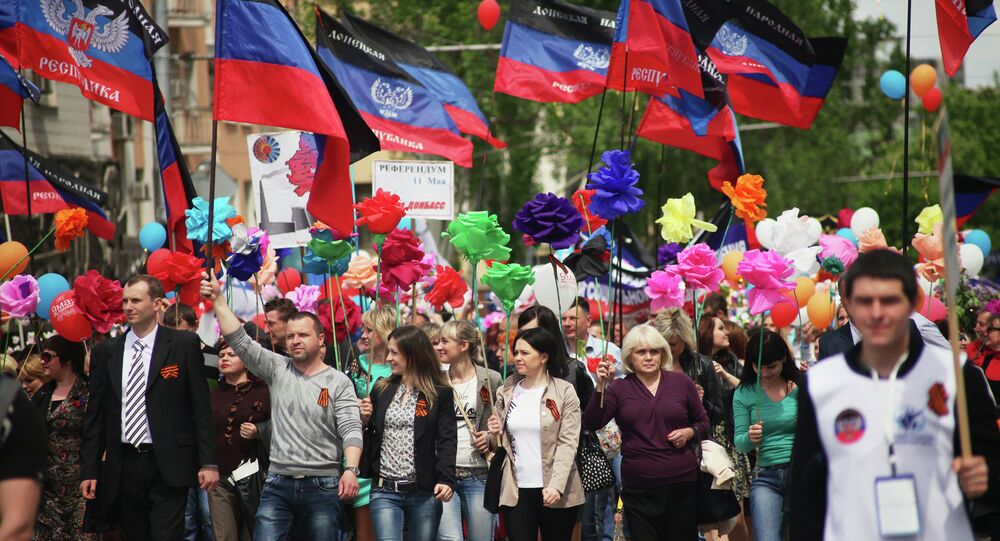 The envoy of the Donetsk People's Republic hopes that Kiev will do its best to use the Minsk-2 deal to put an end to hostilities.

© AFP 2021 / YURY KIRNICHNY
Kiev May Ban Trade With Eastern Donbass Region, Russia's Crimea
DONETSK (Sputnik) — Denis Pushilin, a representative of the self-proclaimed Donetsk People’s Republic in the Minsk peace talks, urged Kiev on Friday to make the most of the ongoing reconciliation negotiations and ruled out a third edition of Minsk accords.

"This ‘Minsk’ will see its logical end," Pushilin said during an online conference on the Donetsk-Live news website. He added that, "there will be no Minsk-3."

Minsk accords refer to a roadmap outlining measures to be taken in order to bring peace to southeastern Ukraine. The first Minsk accord was signed in September 2014, but continued clashes between Kiev forces and independence supporters broke the deal.

A new 13-point peace plan, called the Minsk-2, was renegotiated in the Belarusian capital of Minsk in February 2015 with mediation of Russian, German and French leaders, but skirmishes have never stopped.

Alexandr Maksimenko
US Congress Blocks Aid to Ukraine’s 'Repulsive' Neo-Nazis
Negotiators from the so-called Trilateral Contact Group, made up of Ukraine, Russia and the Organization for Security and Co-operation in Europe (OSCE), have been regularly meeting since 2014 to promote a dialogue between the warring parties and ensure the implementation of the Minsk pact.

Their latest meeting earlier this week focused on the legal status of the breakaway Donetsk region within Ukraine and the republic’s proposals to amend the nation’s constitution, as stipulated in the Minsk deal.

"We have signed documents, we do everything in our power to prevent the negotiations from faltering," Pushilin said Friday. He stressed his side would grab at "the slimmest of chances" that would help settle things at the negotiating table.

Pushilin assured that the Contact Group’s every meeting "made progress that is sometimes invisible to the naked eye," but becomes tangible during in-depth talks.

The next round of Contact Group consultations is expected to take place in Minsk next Tuesday.