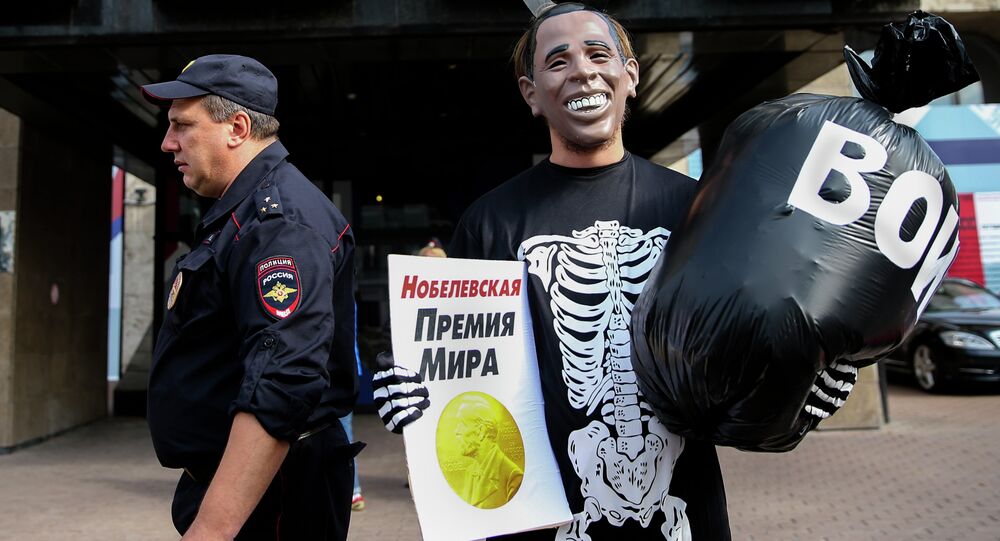 US President Barack Obama has lost all credibility because of his dangerous policies of nuclear escalation towards Russia, Dr. Helen Caldicott, founder of the Nobel Peace Prize-winning International Physicians for the Prevention of Nuclear War (IPPNW), told Sputnik.

WASHINGTON (Sputnik) — Obama was awarded the 2009 Nobel Peace Prize despite public criticisms at the time that he had yet to show any accomplishment worthy of earning it.

“To me Obama has lost total credibility,” Caldicott said on Monday.

“Obama is setting up the Russians to be provoked, which is quite extraordinary.”

The peace activist was commenting on what she regarded as an alarming of tension between the United States and Russia over the Ukraine conflict.

Her comments came after media reports that, at the Group of Seven (G7) meeting in Krun, Germany on Sunday, President Obama had discussed with British Prime Minister David Cameron the possible deployment of new US cruise missiles in the United Kingdom allegedly to deter Russia.

“What on Earth Obama thinks he’s doing, God only knows.”

The anti-nuclear campaigner noted that military exercises are regularly conducted in the Baltics by the United States and its allies as well as by Russia.

“We are dangerously close to having a world war start, even accidentally.”

Caldicott also said she feared the growing US and NATO moves to pressure Russia reflected an irrational recklessness that could escalate into a serious crisis.

“This is above and beyond all else a public health issue. How do these people think they have the right to threaten all life on the planet?”

IPPNW under Caldicott’s leadership was awarded the 1985 Nobel Peace Prize.

Obama said at the time he was surprised and deeply humbled to receive the Nobel peace prize.