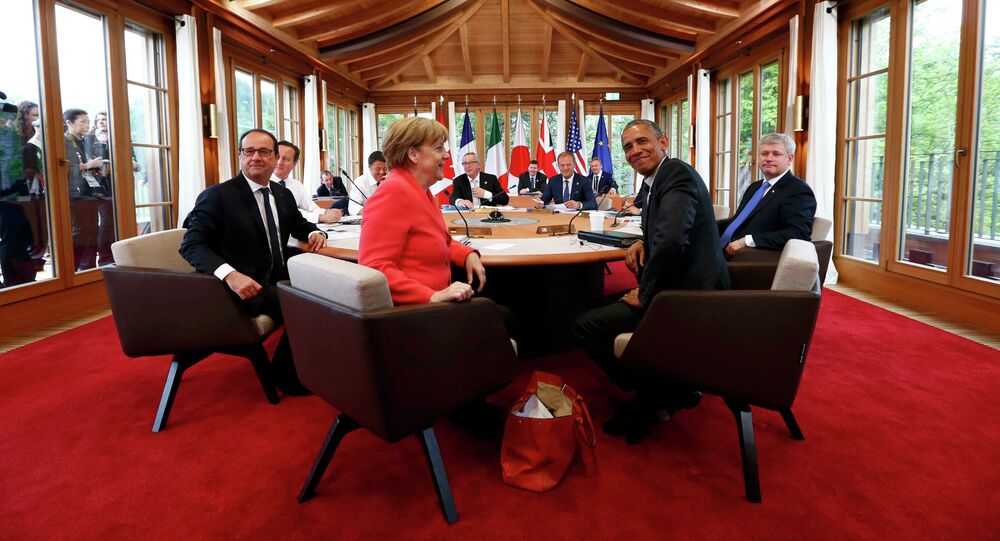 Dmitry Peskov pointed out that the G7 summit itself has not yet ended, and therefore it is too early to draw any conclusions.

© REUTERS / Michael Kappeler/Pool
G7 Needs to Pressure Correct Parties in Fulfilling Minsk Agreements
MOSCOW (Sputnik) — Statements on the anti-Russia sanctions made by the leaders of the Group of Seven (G7) during its summit in Bavaria did not go unnoticed in Moscow, but Russia is waiting for the official results of the meeting, Kremlin spokesman Dmitry Peskov said Monday.

"We have paid attention to the recent statements on the issue of sanctions. They do not sound new," Peskov said.

The Kremlin spokesperson pointed out that the summit itself has not yet ended, and therefore it is too early to draw any conclusions. However, he added that a certain discrepancy between the approaches of the G7 member states has already begun to emerge.

© AP Photo / Charles Dharapak
Extension of Anti-Russia Sanctions, Greek Debt Repayment Dominate G7 Agenda
"We also paid attention to the fact that among the participants of this meeting, there are certain nuances in approaches, some of them stress the need to promote dialogue with Russia, the impossibility of solving serious problems without this dialogue," Peskov told reporters.

During the 41st G7 summit, underway in Bavaria, Germany, on June 7-8, leaders articulated their position on the extension of anti-Russia sanctions, as German Chancellor Angela Merkel said she expected the countries' heads to send a "united signal."

The G7 group comprises Canada, France, Germany, Italy, Japan, the United Kingdom and the United States. Russia is not taking part in the summit for the second consecutive year after first joining the group in 1997.