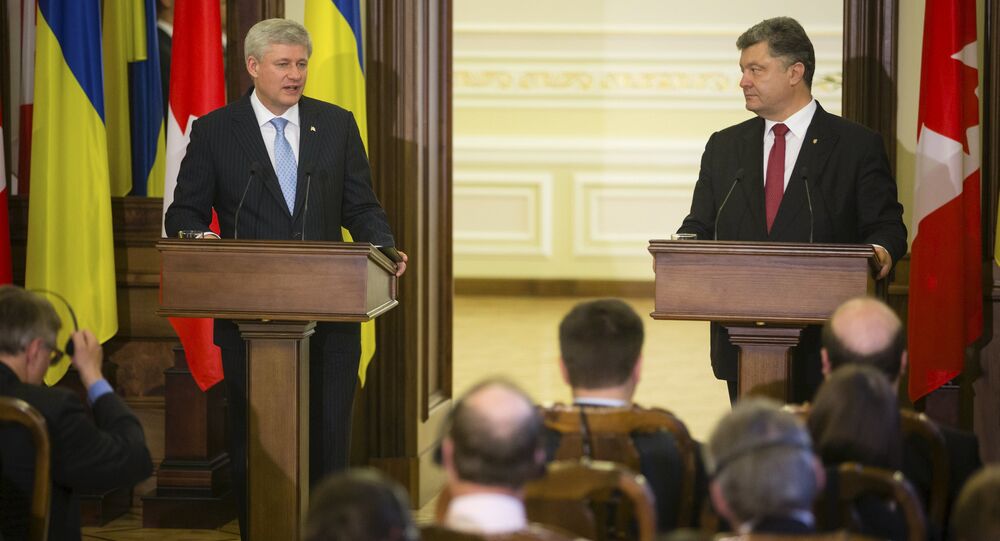 Harper recalled that Canada had imposed sanctions against more than 270 individuals and legal entities from Russia and the supporters of the unrecognized Donetsk and Lugansk People's Republics of Ukraine's eastern Donbass region.

"We reaffirm our readiness to cooperate with our allies to impose new additional sanctions if the situation requires," Harper added.

© REUTERS / Chris Wattie
Canadian Economy Suffers From Anti-Russian Sanctions - Minister
Harper arrived in Ukraine's capital Kiev on Friday to meet Poroshenko and Ukrainian Prime Minister Arseniy Yatsenyuk. It is Harper's third official visit to Ukraine, and it comes ahead of the G7 leaders' meeting in Germany on June 7-8, 2015.

The West has introduced several rounds of anti-Russia sanctions over Moscow's alleged involvement in the Ukrainian conflict, blaming Moscow for supporting Donbass fighters. Russia has repeatedly denied these allegations.

In August, 2014, Russia responded to Western restrictive measures by announcing a one-year food embargo on products originating in states that imposed sanctions against it.

Canadian Military Trainers to Arrive in Ukraine in Mid-August - Yatsenyuk