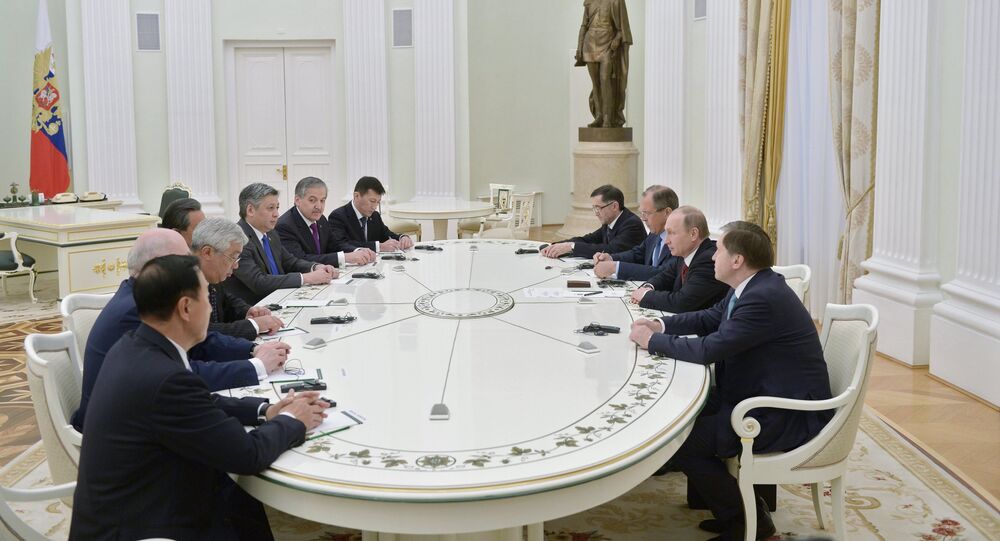 The Shanghai Cooperation Organization is gaining weight in the global politics.

"The SCO may become the main competitor of the G7," Rahimpour said.

© Flickr / Saeid Zebardast
SCO Foreign Ministers Fail to Agree on Iran's Membership – Source
According to the deputy foreign minister, the SCO could gain more importance worldwide as the member states and countries willing to work closely with the organization represented a serious global force.

Rahimpour said that the forthcoming SCO Heads of State Council Meeting could see the participation of 15 non-Western states that, in total, accounted for some 50 percent of the world’s economic, humanitarian and political activities.

"The SCO will become stronger as an international institution if the organization accepts new members," Rahimpour said.

Iran to Benefit From SCO Membership

The membership in the Shanghai Cooperation Organization (SCO) would be beneficial to Iran, Ebrahim Rahimpour told Sputnik.

"Our country will only win if it becomes a SCO member. This could contribute to reaching our main goals," Rahimpour said adding that Iran's main goals within the organization are economy, transit and security.

"We want the SCO region to be strong and independent," the Iranian diplomat stressed.

Rahimpour said that if Iran were accepted into the SCO as a member state, the country would be able to work on restoring peace and stability in the region.

On Wednesday, Russian Foreign Minister Sergei Lavrov said the SCO might raise Iran's status after the issue with Iranian nuclear program was resolved.

Earlier on Thursday, a source at the SCO foreign ministers’ meeting told Sputnik that the member countries failed to agree on Iran's membership.

Negotiations on Russian S-300 Deliveries to Iran at Final Stage

Negotiations on the supply of Russian S-300 air defense systems to Iran are at a final stage, Ibrahim Rahimpur said.

“We are currently holding talks with Russia, which are at the final stage, on the acquisition and supply of S-300 missile delivery systems,” Rahimpur told RIA Novosti.

Eight years have passed and Iran was finally able to agree on a framework deal with the group of six world powers to dismantle parts of its nuclear infrastructure in exchange for the easing of sanctions, taking the edge off the nuclear row.

© AP Photo / Ebrahim Noroozi
Iran to Test Own Version of S-300 Missile Complex
In April, Russian President Vladimir Putin lifted the ban on the sale of S-300s to Iran citing progress in talks, due to be finalized at the end of June.

Moscow’s decision to go ahead with arms deliveries to the Islamic Republic has been criticized by Israel amid fears they could increase tensions in the region. US President Barack Obama said he was surprised the deal was suspended for so long, given that the defensive S-300s were not covered by the UN embargo.

The upcoming Shanghai Cooperation Organization summit in the Russian city of Ufa will be of much greater significance than the previous two gatherings, Iran's deputy foreign minister Ebrahim Rahimpour said.

© AFP 2021 / ADEM ALTAN
Iran May Use Turkish Stream to Deliver Gas to Europe After Sanctions Lifted
He said that Iran has been actively involved in SCO activities and that, thanks to friendly ties between Iranian President Hassan Rouhani and Russian President Vladimir Putin, Tehran was taking all necessary steps to participate in the SCO Heads of State Council Meeting on July 9-10 in the Russian city of Ufa.

Afghanistan Hopes to Join SCO Alongside Pakistan, India and Iran