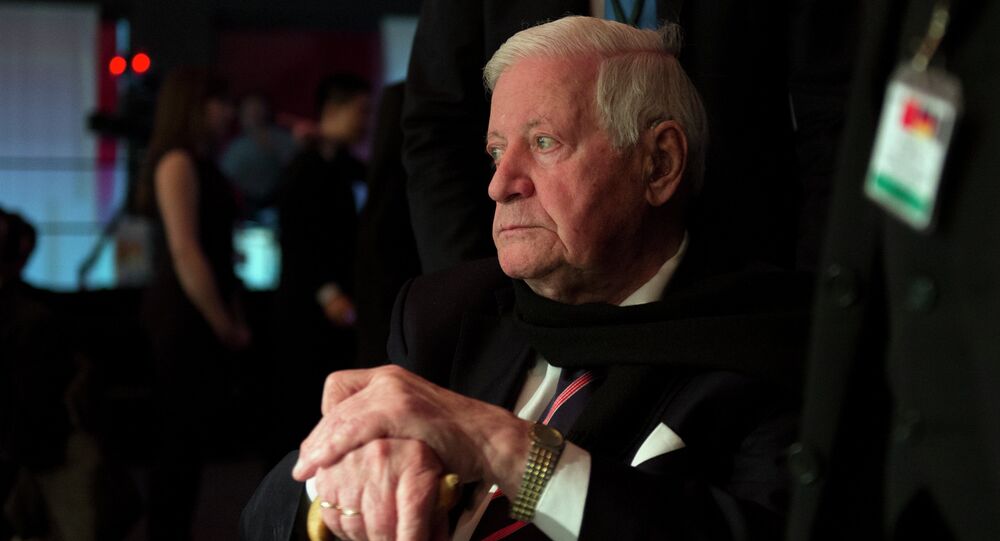 Speaking to Deutsche Presse-Agentur, former German Chancellor Helmut Schmidt stated that he was not harboring high hopes for the upcoming G7 Summit, set to begin June 7. Noting that the summit makes no sense without Russian participation, Schmidt's greatest hope is that Western countries do not "add fuel to the fire" over the crisis in Ukraine.

© AP Photo
G7: US to Bully Europe Over Greece Deal Amid Grexit Fears, Russian Links
The 96-year-old former West German chancellor and Social Democratic politician, who served as chancellor from 1974 to 1982, told Deutsche Presse-Agentur that "my expectations are limited." Schmidt noted that given the background of the Ukrainian crisis, his main hope was that Western countries "do not add fuel to the fire; I would be happy with such an outcome."

Schmidt also noted that he was confident that Russian President Vladimir Putin would accept an invitation to attend the summit, if it "was done in the proper form." He stated that for him "it is obvious that Putin feels offended that the West, which, in his view, does not take him seriously enough."

Schmidt also stated that he understands the Russian president's angling for position in global affairs, noting that "Putin is the person who, after a period of Wild-West [chaos] in his country under [Boris] Yeltsin, restored the Russian state. And this, according to Putin, is his main task…Putin inherited the last of the existing empires," which he is working to save, according to the ex-chancellor.

Schmidt is confident that the current political confrontation between the West and Russia will not lead to a military conflict. "I believe that neither Putin nor Obama want this. Crimea is not a reason for war. Even Ukraine as a whole is not a reason for war" for either of the two men. In Schmidt's view, Russia and the West stand to continue a process of difficult negotiations which may take years.

© Sputnik / Alexei Druzhinin
G-7 Decision to Snub Putin at Summit a Mistake – Former German Chancellor
Schmidt's comments echo those made by former Chancellor Gerhard Schroeder, who also recently told German newspaper Rheinische Post that the decision not to invite Putin to the summit was "a mistake."

The Group of Seven Summit is an annual meeting of heads of state from the US, the UK, France, Italy, Japan, Canada and Germany. Russia was indefinitely suspended from the organization in March 2014 over the crisis in Ukraine.

This year’s gathering will open at Bavaria's Elmau Castle on June 7. High on the agenda of the two-day summit will be the situation in Ukraine, as well as efforts to contain the Islamic State, and the Ebola virus.