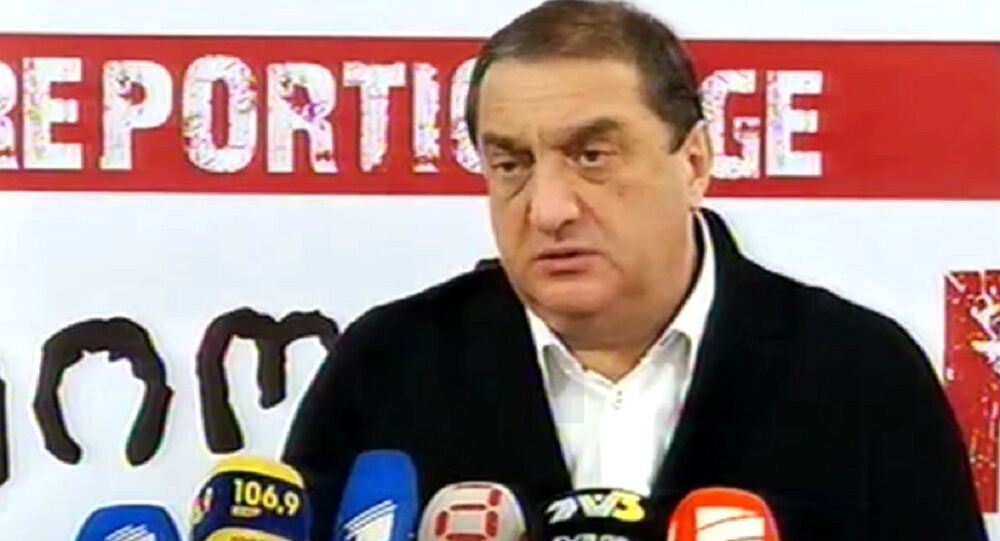 Davit Saganelidze, the leader of the parliamentary majority the Georgia's parliament, has expressed his sympathy to the people of Ukraine over Mikheil Saakashvili's appointment as governor of Odessa, calling the appointment a "serious mistake" by Ukrainian authorities.

© AP Photo / Virginia Mayo
Fugitive Georgian Ex-President Appointed Governor of Ukraine's Odessa Region
Speaking to journalists on Saturday, Saganelidze noted that "this is a very serious mistake on the part of Ukrainian authorities."

"I sympathize with the Ukrainian people, who are very near and dear to my heart, and especially to the people of Odessa," Saganelidze added, commenting on Saturday's announcement by Ukrainian President Petro Poroshenko that he had appointed Saakashvili governor of the southern region.

Saganelidze noted that "God willing, Mikheil Saakashvili would undergo an ideological change, and we would deal with a completely different person, although for a man like this, I think it's impossible."

Commenting on his long-standing opposition to Saakashvili, Saganelidze noted that he was convinced that Ukrainians would soon come to know Saakashvili for who he really is. "When Saakashvili broke into the hall of parliament in 2003, I was against it, the PM noted.

"At that time, many had criticized me for failing to stand with him, but I insisted that this deranged person will not bring the country any good. It is likely that [some] years will likely pass, and the Ukrainian people will become convinced of this, just as happened in the case of the Georgian people," Saganelidze added.

© Sputnik / Iliya Pitalev
Former Georgian President Saakashvili Gets Ukrainian Citizenship – Lawmaker
Saakashvili, appointed Saturday, noted that he would like to see Odessa become the "capital of the Black Sea." For his part, Poroshenko stated that among Saakashvili's main tasks will be fighting oligarchy and corruption.  Saakashvili has been a fugitive from justice in Georgia since 2013, after Georgian prosecutors charged him with numerous offences, from abuse of power to misappropriation of funds to over $5 million in embezzlement charges.

Georgia has repeatedly asked Ukraine to extradite Saakashvili, who was appointed as an advisor to the Ukrainian government earlier this year. The country has also tried, unsuccessfully, to get the ex-president on Interpol's wanted list.