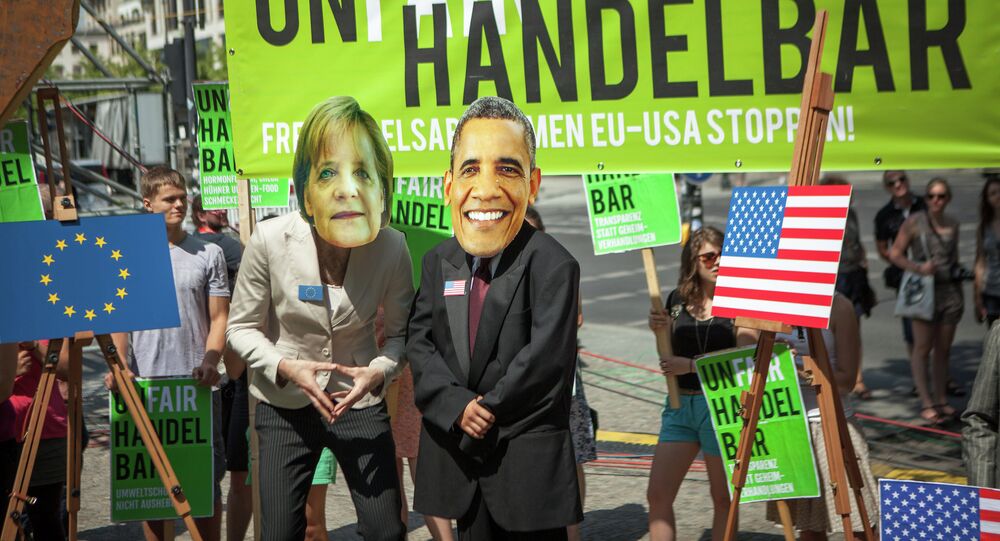 German Chancellor Angela Merkel said she hoped to sign the Transatlantic Trade and Investment Partnership (TTIP) treaty with the United States before US President Barack Obama leaves office in early 2017, in an interview with German daily Sueddeutsche Zeitung.

MOSCOW (Sputnik) — US voters will go to the polls in November 2016 to elect the next president. Obama is not eligible to seek reelection due to the limits enshrined in the US Constitution.

If the European Union fails to agree on the US-proposed trade and investment deal before Obama steps down, "there will be a long pause," the chancellor warned the nation in her interview with the Sueddeutsche on Friday.

Merkel denied allegations that the ongoing scandal over US spying on German and EU governments and businesses could derail TTIP talks. Instead, she urged to let bygones be bygones and called to step up cooperation with Washington in trade and security alike. "Both is good for Germany," the chancellor noted.

The European Parliament is to vote on the TTIP deal in early June. The talks have been on and off for years, with EU politicians and civil group activists arguing that the accord would give too much power to transnational corporations. Supporters of the treaty claim it would eliminate trade barriers between the two economic powerhouses.