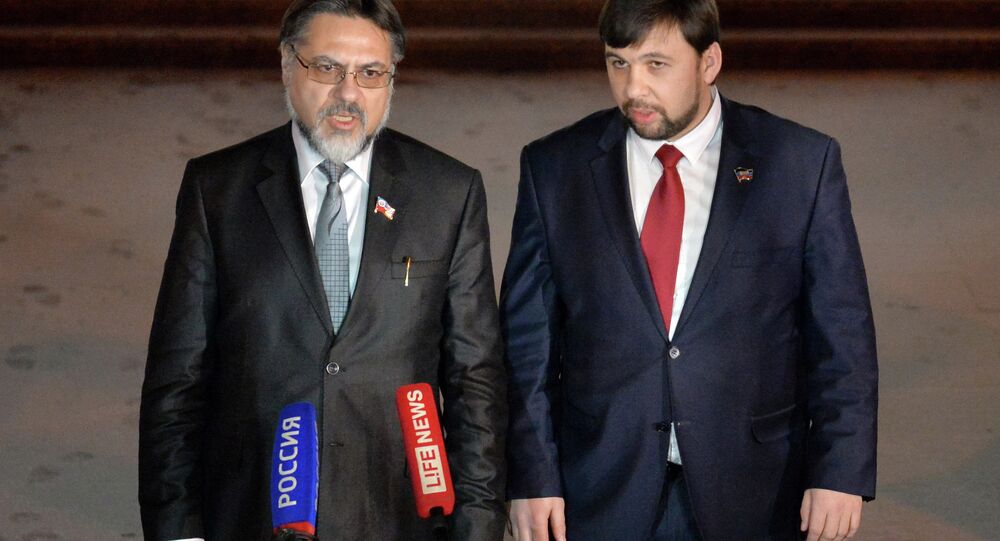 MOSCOW (Sputnik) — The Minister told Rossiya-24 television channel that the launch in early May of the four working sub-groups of the contact group, that would oversee the implementation of the Minsk peace agreement, opens an important opportunity to discuss a broad range of issues. But even this initiative did not go without problems.

"There was a huge battle, because despite the Minsk Agreements, to which Donetsk and Luhansk are indispensable part, Kiev tried to reduce the contact group and its sub-groups to a trilateral format Russia-Ukraine-OSCE so that LPR and DPR would be only invited to hear the results of the agreements if Kiev wishes to do so."

© Sputnik / Viktor Tolochko
Russia Played Key Role in Encouraging Donbas to Sign Minsk Deal - Lavrov
Lavrov added that without the participation of Donbas, the working sub-groups would have been inefficient. Also, such a format would have created a wrong impression that "Russia is somehow a side to the internal Ukrainian conflict and Kiev is not fighting its regions and its people."

Lavrov noted that due to the efforts by the Organization for Security and Co-operation in Europe (OSCE) and Normandy Four, the participation of Donbas in working sub-groups was asserted.

At the mid-February meeting in Minsk the heads of Russia, Ukraine, France and Germany agreed to a set of measures aimed at facilitating the Ukrainian peace process. The 13-point deal included a ceasefire, the withdrawal of heavy weaponry from the line of contact between Kiev forces and independence supporters of Donbas and amendments to the Ukrainian constitution to grant the breakaway eastern Ukrainian regions more autonomy.

Minsk agreements also stipulated the creation of working sub-groups on economic, political and security issues to oversee the implementation of the deal.