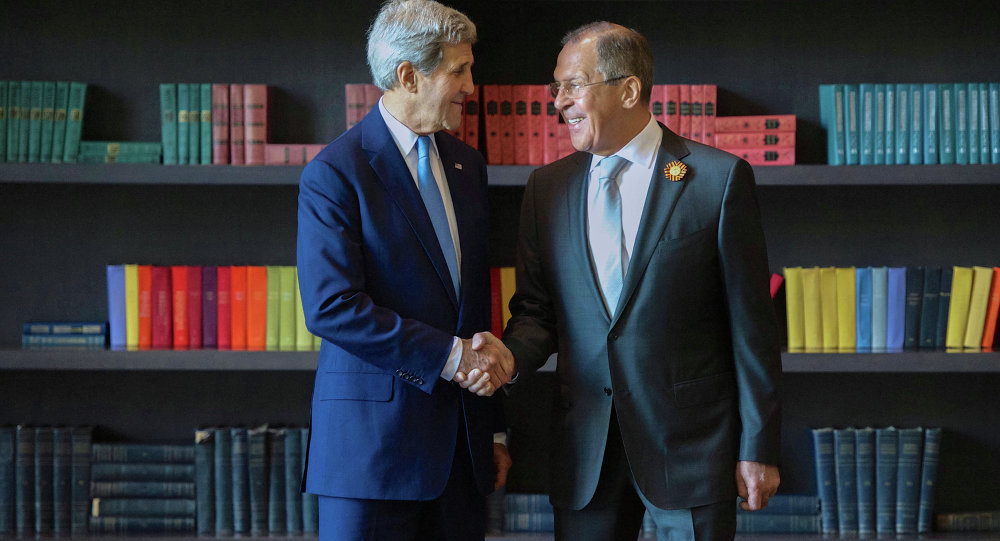 US Secretary of State John Kerry, who has been on his first visit to Russia since May 2013, met with Russian President Vladimir Putin and Foreign Minister Sergei Lavrov behind closed doors on May 12.

US Secretary of State John Kerry's visit to Sochi on May 12 proves that attempts to isolate Russia had failed, Russian Foreign Minister Sergei Lavrov said Monday.

"Of course, it [Kerry's visit to Sochi] means, first of all, that attempts to isolate Russia have failed. The issues that were raised by Kerry in Sochi were not only regarding Ukraine [crisis], but also Syria, Yemen and many others, the set of these questions suggests that it is very difficult to solve them without Russia."

© REUTERS / Joshua Roberts
‘Isolation’ is Not Working: US Seeks Cooperation With Russia - German Media
"I am grateful to my colleague [John Kerry]. I think that when he arrived [in Russia for talks], he did it very responsibly. We honestly and frankly discussed all regional conflicts," Lavrov said.

Russia hopes that after US top diplomat's visit to Sochi, Washington will take a step toward restoration of cooperation with Moscow, Lavrov said.

"We are ready for this. But we were not those who had suspended relations. Those, who had done it, should reconsider their stance," he added.

© AFP 2019 / JIM WATSON / FILES
Kerry: Poroshenko Should 'Think Twice' Before Using Force in Donbass
Russia and the US support the full implementation of the Minsk agreements on Ukrainian reconciliation, the Russian foreign policy chief said.

"The meaning of what we talked about [with US Secretary of State Kerry in Sochi] is to find common ground. I must say that it was done quickly because both Russia and the United States support the full implementation of the Minsk agreement."

"But, as usual, the devil is in the details," Lavrov added.

Washington should convince Kiev not to return to a military scenario in Donbass, as well as to resolve the crisis through a direct dialogue with the self-proclaimed Donetsk and Lugansk people's republics, the Russian foreign minister said.

Lavrov to Kerry: Russia-US Cooperation Possible Only on Equal Basis