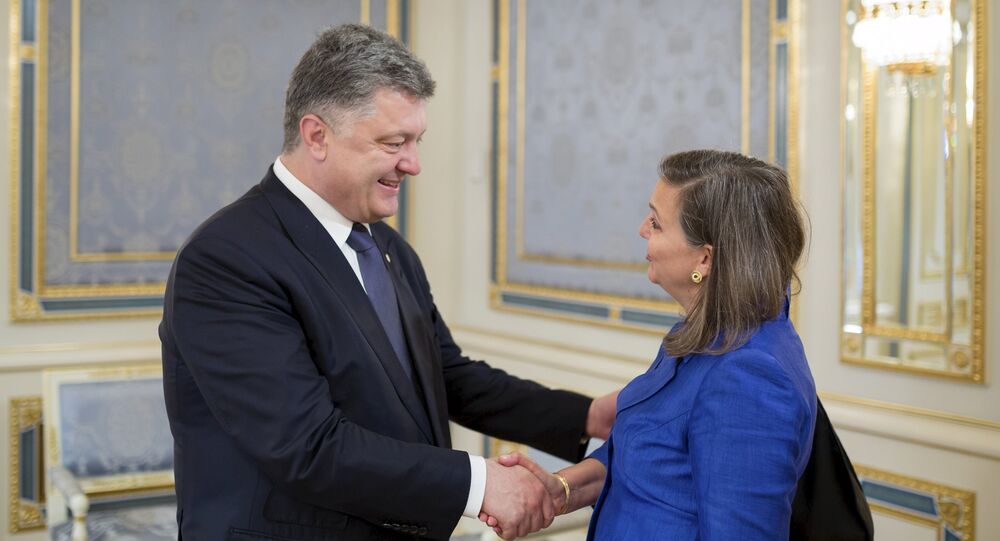 US Assistant State Secretary for European and Eurasian Affairs Victoria Nuland said that the United States will expand its role in enforcing the Minsk agreements on Ukraine.

© AFP 2020 / JIM WATSON / FILES
Kerry: Poroshenko Should 'Think Twice' Before Using Force in Donbass
KIEV (Sputnik) — The United States is ready to expand its role in enforcing the Minsk agreements on Ukraine with the European Union and members of the Normandy Quartet, US Assistant State Secretary for European and Eurasian Affairs Victoria Nuland said Saturday.

Nuland spoke at a briefing following talks with Ukrainian Interior Minister Arsen Avakov during her three-day visit to Kiev, where the sides addressed the ongoing conflict in the country's southeast.

"The United States deepens our engagement in the Minsk implementation process in lockstep with our European allies and partners, with the EU and particularly with the Normandy powers," Nuland stressed.

The diplomat underscored the security, political and humanitarian aspects of the 13-point agreement worked out by the leaders of Normandy Quartet, comprising of Russia, Germany, France and Ukraine, in February. Specifically, Nuland said Washington insists on an all-out ceasefire along the line of contact in Donbas.

© AP Photo /
NATO Chief on Ukraine: Actions Speak Louder Than Words
"In Sochi, [Russian President Vladimir] Putin told Secretary Kerry that he is fully committed to Minsk implementation. It's now important that all sides walk the walk, not just talk the talk," Nuland said, referring to Kerry's first visit to Russia since 2013 earlier this week.

During the course of her trip to Ukraine, Nuland said the sides discussed the use of a humanitarian working group to assist local residents, ensuring the Organization for Security and Co-operation in Europe access along the Ukrainian-Russian border, as well as preparing for free and fair Ukrainian elections.

To date, Washington has been conspicuously absent from the Ukrainian crisis settlement talks. The conflicting sides in the year-long standoff disagree over its participation in the Normandy format talks, with Kiev backing and the Donbass independence supporters opposing the idea.

US, Russia Should Remember What Unites Two Nations - Nuland

US Decision to Arm Ukraine Depends on Transatlantic Discussions - Nuland