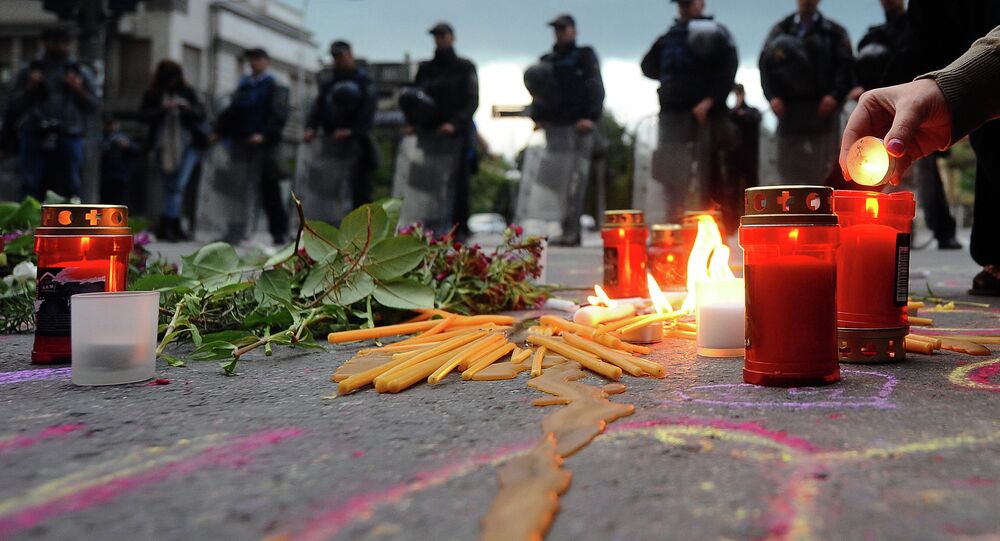 Macedonia's opposition pledges more protests amid growing violence and attacks on police officers, as the country is forced to decide between a national identity and EU/NATO integration.

Although the emerging ethnic and political conflict has been shown as one of a struggle for democracy and against corruption, the issue of ethnic nationalism and European integration which is the predominant topic of anti-government discourse in the country has been overlooked.

Macedonia's ethnic divide between Albanians and Macedonians came to a head on May 9, when an attack by Albanian gunmen in the town of Kumanovo left at least 18 people dead. A Macedonian opposition member alleged that the attack was faked, and that the government had attacked itself.

© REUTERS / Ognen Teofilovski
NATO Calls to 'Exercise Restraint' Amid Clashes Near Kosovo Border
Violent opposition protests in the country's capital on May 6 injured 38 police officers and at least two protesters.

The International Crisis Group, a body often cited by Macedonian opposition organizations, suggested a path toward European integration in Macedonia which would involve decentralization of the state and resolving the naming dispute with Greece by renaming the country to something akin to "the Republic of North Macedonia."

Northern Macedonia is also a region of Macedonia's neighbor Bulgaria, which does not officially recognize the Macedonian people as a separate ethnic group from Bulgarians.

The conflict has been predominantly shown as one between an authoritarian government and a democratic opposition in Western media and political discourse.

"I think we've got to be careful about this idea that this is necessarily an ethnic problem. What we have essentially in Macedonia is a political problem at the moment," Dr. James Ker-Lindsay, a researcher in Balkan studies at the London School of Economics told Sputnik on Tuesday.

Although the Macedonian opposition talks of democracy and anti-corruption campaigns, its actual political discourse, such as in the prominent Societas Civilis group which has received US government funding, focuses primarily on issues of ethnicity and nationalism. Particular emphasis is given to the study of Bosnia and Herzegovina, where ethnic groups live in a separated country which is on track to EU and NATO membership.

© AP Photo
Macedonian Conflict: 'Greater Albania' Used by West to Destabilize Balkans
If there is any difference with the situation in Ukraine's Russian minority, it is that US-sponsored interests favor the recognition of the Albanian minority in Macedonia. Unlike Russia, Albania is a US ally and NATO member.

The concept of "Greater Albania," an expansion of the Albanian state into areas of other countries where ethnic Albanians live has also become more prominent.

"The concept of Greater Albania is once again relevant but it won't see any progress without the help of the North Atlantic bloc," Balkan affair expert Duan Prorokovic told Sputnik on Tuesday.

The organized faction of the Macedonian opposition, the Social Democratic Union of Macedonia (SDSM), is the successor to Macedonia's communist-era League of Communists of Macedonia. The SDSM now supports the idea of "Macedonia as full-fledged member of NATO and EU" according to the party's official website.

The Macedonian government rejected the movement toward European integration in recent years, which involves not only changing the country's name, but also issues of ethnic Albanian representation in the government

The move coincided with a rise in USAID grants such as the $4.8 million Civil Society Project, which trained over 1,000 young people in the use of social media and activism and mobilized 22 "civil society organizations."

Corruption allegations have been circulated against both the government and the opposition. A video emerged on Wednesday, in which opposition head Zoran Zaev apparently demands a 100,000 euro ($114,000) bribe from a mayor.

Bulgaria's rejection of the South Stream pipeline in 2014 led Macedonia to consider joining the alternate route, which would grant the country both accessible natural gas and a revenue source through transit agreements. The negotiations coincided with a rise in protests and armed attacks against police officers.

"These events in Macedonia are developing on the backdrop of the Macedonian authorities’ refusal to join the sanctions policy against Russia, as well as on the backdrop of its active support that Skopje showed in regard to the planned construction of the Turkish Stream gas pipeline, which many in Brussels and those overseas are against," Russian Foreign Minister Sergei Lavrov said on Friday.

New opposition protests are scheduled for Sunday as the country continues to recover from armed violence.

Macedonia: The Ghost of a New Balkan War