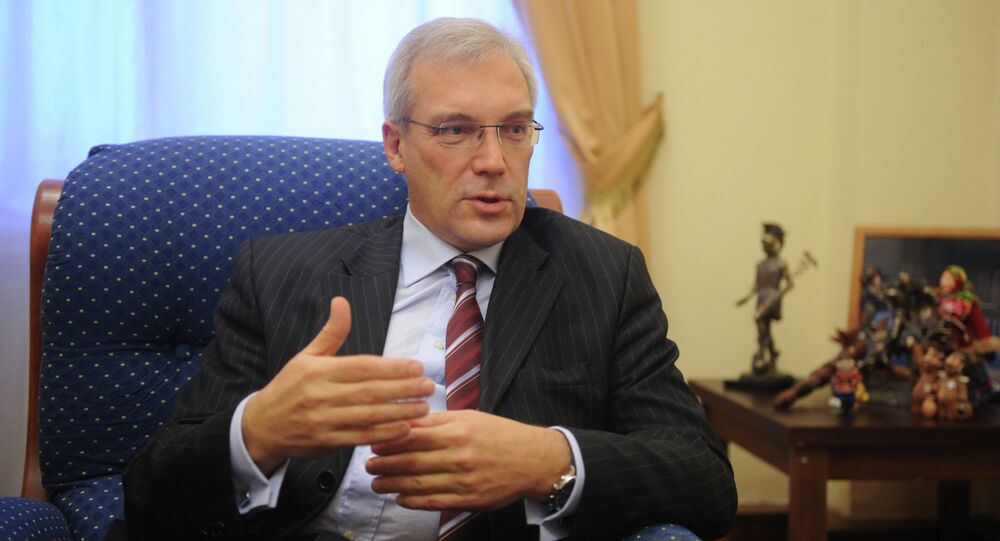 Russia’s envoy to NATO, Alexander Grushko said that there are not objective reasons for the United States to keep tactical nuclear arms in Europe.

“If we’re talking about the essence of the problem, then, of course, we understand that today there are not objective reasons to keep tactical nuclear arms in Europe,” Grushko said during a video linkup with Moscow.

Grushko emphasized the need for the United States to remove its nuclear arms from Europe in order to support security in the region.

“We believe that the United States needs to remove these nuclear bombs, atom bombs back to its own national territory, which would be a serious contribution in strengthening both strategic stability and security in Europe,” he said.

Grushko added that Moscow has already returned all of its nuclear arms back to Russian territory.

Last month, Russian Foreign Minister Sergei Lavrov said that the United States is breaching the Non-Proliferation Treaty by placing its tactical nuclear weapons in the territories of five European countries.

© AP Photo / Pavel Golovkin
US Breaching NPT by Deploying Nuclear Arms in European Countries – Lavrov
The exact number of US tactical nuclear weapons deployed in Belgium, Italy, Turkey, Germany and the Netherlands is unknown, but the Center for Arms Control and Nonproliferation research group puts it at around 500 warheads.

Also Russia’s envoy to NATO said that Russia hopes that NATO will abandon the policy of “senseless expansion” and that common sense will prevail when the alliance decides on Georgia and Ukraine membership.

“I hope that common sense will ultimately prevail and these dangerous political games, related to the policy of senseless expansion and attempts to use it as a leverage, will be left aside and our partners will start treating situation from the point of view of strengthening the European security, which is in everyone’s interest,” Alexander Grushko said.

Grushko was commenting on a statement made by Turkish Foreign Minister Mevlut Cavusoglu during Thursday's NATO Foreign Ministers Summit in Antalya. Cavusoglu expressed hope that NATO's next summit will focus on accepting Georgia, Macedonia, Montenegro and Bosnia into the alliance.

The Russian diplomat said that Russia has repeatedly warned that NATO expansion to the East could have "most serious consequences" for security in Europe.

He, however, expressed certainty that there were plenty of "sensible" members in NATO that do understand "the huge risks associated with continuing the reckless 'Open Door' policy."

Ukraine and Georgia have each declared ambitions to join NATO. However, both countries are involved in territorial disputes in the post-Soviet space. Kiev has not recognized Crimea's reunification with Russia last year, while Tbilisi still considers the breakaway republics of Abkhazia and South Ossetia as parts of its territory.