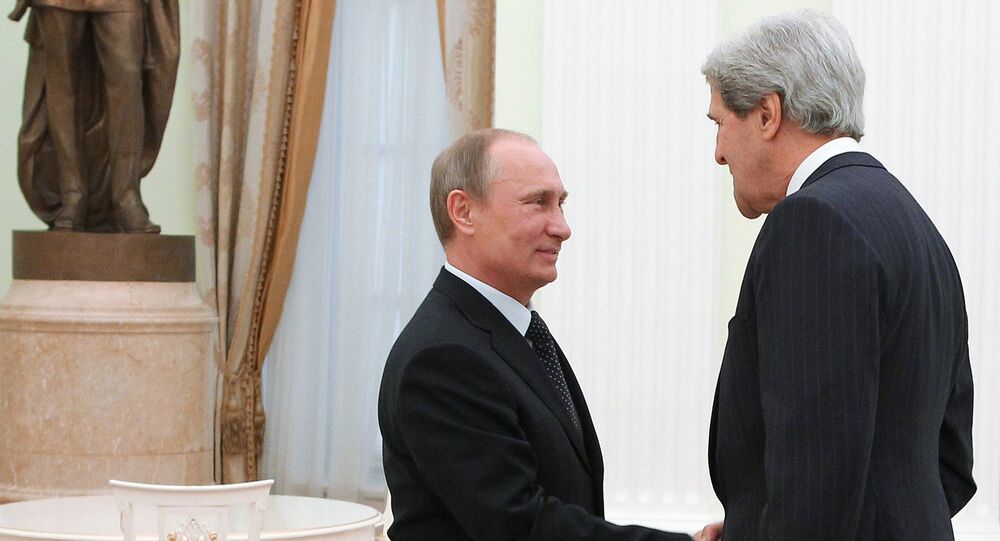 Putin to Meet With Kerry in Sochi Tuesday

The Russian President and the US Secretary of State will hold talks on Tuesday.

"The president will meet with Secretary of State Kerry," Peskov told journalists.

According to Peskov, Russian Foreign Minister Sergei Lavrov and John Kerry will meet first. The top diplomats are expected to discuss the situation in Ukraine, Yemen, Iran and Syria.

Earlier the US State Department said that Kerry headed for Sochi in Monday where he plans on meeting with Putin, Lavrov, and other Russian officials.

The agenda for the meeting between Vladimir Putin and John Kerry is broad, but a discussion on sanctions is not a topic for Russia, Dmitry Peskov said.

“The agenda is extremely broad, of course,” Peskov told journalists.

© AP Photo / Sergiy Vaganov
Minsk Deal Fulfillment More Important Than Normandy Format Change - Kremlin
When responding to a question on whether sanctions would be brought up, Peskov said that “this is not our topic.”

Moscow has given a positive assessment to US Secretary of State John Kerry’s visit to Russia because adjusting relations between the two countries is only possible through dialogue, the Kremlin spokesman said.

“First of all of course, it’s very positive that US Secretary of State [John Kerry] decided to hold talks with his colleague [Russian Foreign Minister Sergei Lavrov],” Peskov told journalists.

He said that Moscow has said numerous times that it has never been the initiator of “frosty” relations.

“We are always open to holding dialogue, and through dialogue we can already look for a way to a closer coordination in solving international issues. This can be done only through dialogue.”

A source told RIA Novosti Monday that Moscow hoped that Kerry would bring new suggestions regarding bilateral relations and the Ukrainian crisis to the negotiations table.

© Sputnik / Ramil Sitdikov
Absence in Moscow on V-Day is a Mistake of Those Who Don't Know History - Eskin
US State Department said in a statement Monday that the visit was part of an "ongoing effort" to maintain direct communication with senior Russian officials, and to make sure that US views were clearly conveyed.

The top US diplomat has cancelled his trip to Russia many times, a diplomatic source told RIA Novosti.

The deterioration between the US-Russian relations comes amid the Ukrainian crisis. Washington, as well as its allies, imposed several rounds of sanctions against Moscow, accusing it of meddling in Kiev's internal affairs.