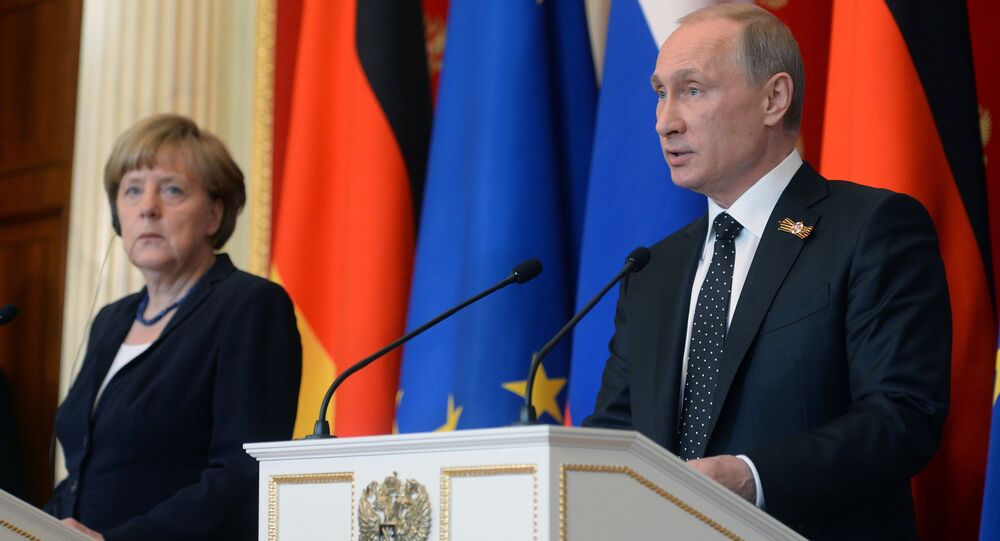 Russia and Germany differ greatly in assessing the coup in Ukraine, but have similar stance on resolving the country's crisis through diplomatic means, Russian President Vladimir Putin said during a joint press conference with German Chancellor Angela Merkel in Moscow.

MOSCOW (Sputnik) – German Chancellor Angela Merkel arrived in Moscow on Sunday to meet with the Russian leader and lay a wreath at the Tomb of the Unknown Soldier to honor the memory of millions of Soviet people who had been killed during WWII.

"While discussing the international agenda, naturally the situation in Ukraine was the center of attention. [German Chancellor Angela] Merkel and I discuss [this issue] on a regular basis, as well as with the president of France and the president of Ukraine in the so-called Normandy format, which has proven itself quite an effective mechanism of international contribution to the peaceful settlement of the conflict. Yes, we differ greatly in the assessments of the events that led to an anti-constitutional coup in the Ukrainian capital in February 2014," Putin said.

© Sputnik
Putin, Merkel Stress Need for Russian-German Cooperation
Relations between Moscow and Berlin are not in their best shape, Putin said.

The Russian president explained that the goods turnover between the two countries dropped by 6.5 percent last year for the first time in five years, adding that the figure nosedived by over 35 percent in the first two months of 2015.

"This situation clearly is not in the interests of Russia or Germany," Putin said.

The economic blockade of eastern Ukraine must be lifted; while the issue must only be resolved through dialogue between Kiev and the self-proclaimed republics of Donetsk and Lugansk, the Russian leader said.

“I’m convinced that in order to provide reliable and long-term settlement, only setting up direct dialogue between Kiev, Donetsk, and Lugansk is possible. I believe that this is one of key conditions for the settlement as a whole.”

“We believe that it’s necessary to lift the economic blockade, renew financial and bank ties, as well as to hold a constitutional reform with the participation of the country’s southeast,” Putin added.

The set of measures to de-escalate the conflict in Ukraine reached in Minsk in February stipulates full restoration of social and economic networks in Donbass, as well as resuming social payments, such as pensions, among other provisions.

“I would like to inform you that on May 17-19 of this year our delegation headed by the Economic Development Minister will be in Brussels.”

Putin said that, when speaking with Merkel, the sides had agreed on the necessity of continuing talks in regard to Ukraine's Association Agreement with the EU taking into account both Russia's and EU's economic interests.