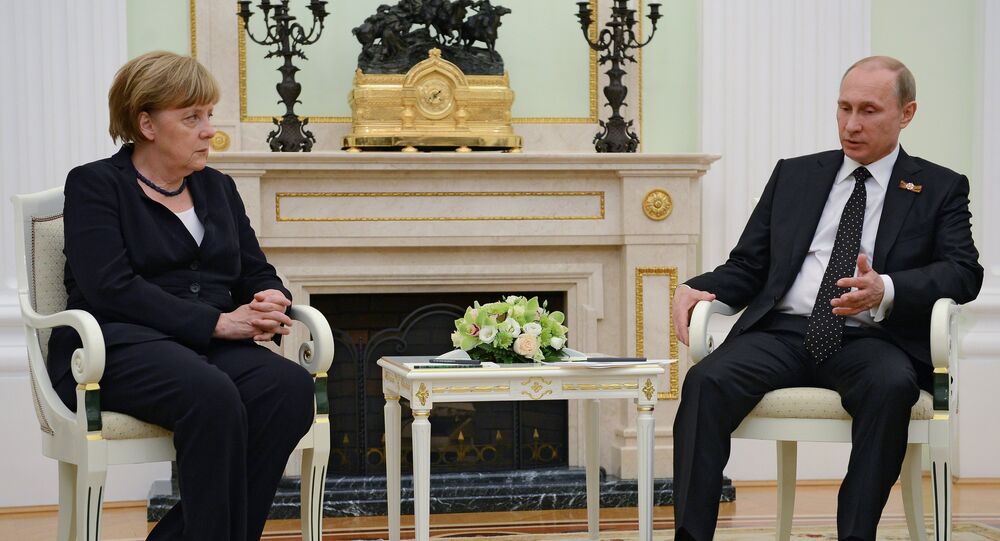 Russian President Vladimir Putin and German Chancellor Angela Merkel stressed during a meeting on Sunday that Moscow and Berlin need to find diplomatic solutions to problems in bilateral relations as soon as possible.

MOSCOW (Sputnik) – The Russian president said that Russia would seek to resolve problems that have a negative impact on the relations between Moscow and Berlin.

Merkel noted that Russia and Germany need to cooperate in solving the “difficult situations” between the two countries.

“We need to work, including in cooperation in difficult situations as they are now and strive to finding diplomatic paths [to solving them],” Merkel responded to Putin.

Host photo agency
Putin, Merkel Lay Wreath at the Tomb of the Unknown Soldier in Moscow
Along with several other Western leaders Angela Merkel decided not to attend the Victory Day parade in Moscow marking 70th anniversary of the victory over Nazi Germany. Heads of nearly 30 foreign states and governments, however, arrived in Moscow the next day to honor the memory of millions of Soviet people who had been killed during World War II, as well as to hold a meeting with the Russian leader.

Earlier in the day, the two leaders took part in a wreath-laying ceremony at the Tomb of the Unknown Soldier near the Kremlin walls in Moscow.

Putin and Merkel will discuss bilateral relations, as well as Russia-EU ties and the situation in Ukraine during their Sunday meeting in Moscow.

Ukrainian Crisis to Dominate Putin, Merkel Talks in Moscow on May 10