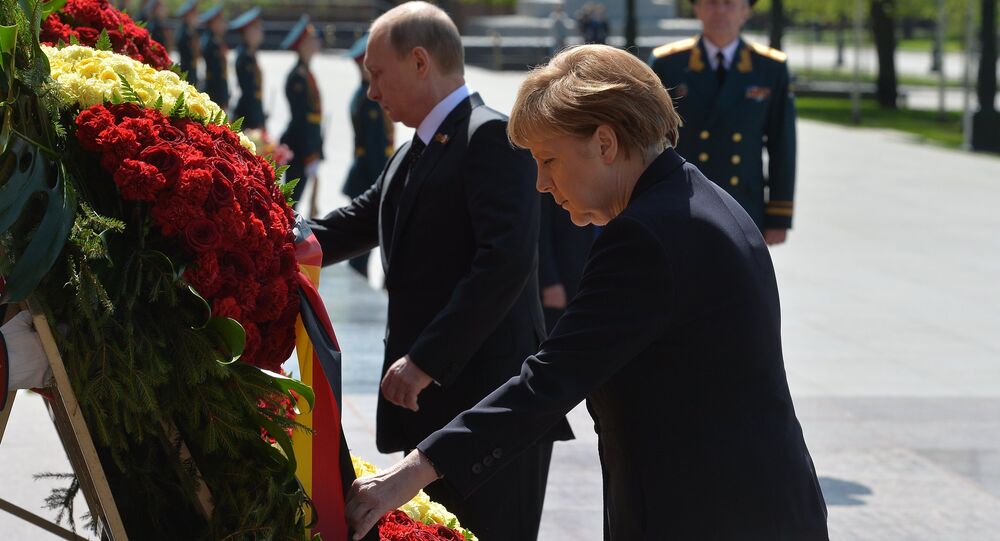 Russian President Vladimir Putin and German Chancellor Angela Merkel laid a wreath at the Tomb of the Unknown Soldier, a WWII memorial near the Kremlin walls.

© AP Photo / Michael Sohn
Ukrainian Crisis to Dominate Putin, Merkel Talks in Moscow on May 10
After the commemoration ceremony a bilateral meeting of the two leaders will be held in the Kremlin. Putin and Merkel are expected to discuss the Ukrainian crisis resolution. Following the meeting they are set to hold a press-conference.

Along with several other Western leaders Angela Merkel decided not attend the Victory Day parade in Moscow marking 70th anniversary of the victory over Nazi Germany. Heads of nearly 30 foreign states and governments, including Chinese leader Xi Jinping and UN Secretary-General Ban Ki-moon, participated in the celebrations.

© AP Photo / Markus Schreiber
Visit to Moscow to Honor Memory of WWII Victims Important Despite Tensions With Russia - Merkel
On May 2, the German chancellor said that her visit to Moscow on May 10 to honor the memory of millions of people who had been killed during World War II is very important despite existing disagreements between Berlin and Moscow.

"To date, there is huge controversy between Russia and us [Germany], including the issue of what is happening in Ukraine. However, it is important to me to jointly lay wreaths on the Tomb of the Unknown Soldier on May 10 with Russian President," Merkel said in a video blog.

In December 1966, remains of the Unknown Soldier were transferred from a mass grave of Soviet soldiers in Moscow and were buried in the Alexander Garden on the Red Square to mark the 25th anniversary of the Soviet victory over Nazi Germany.