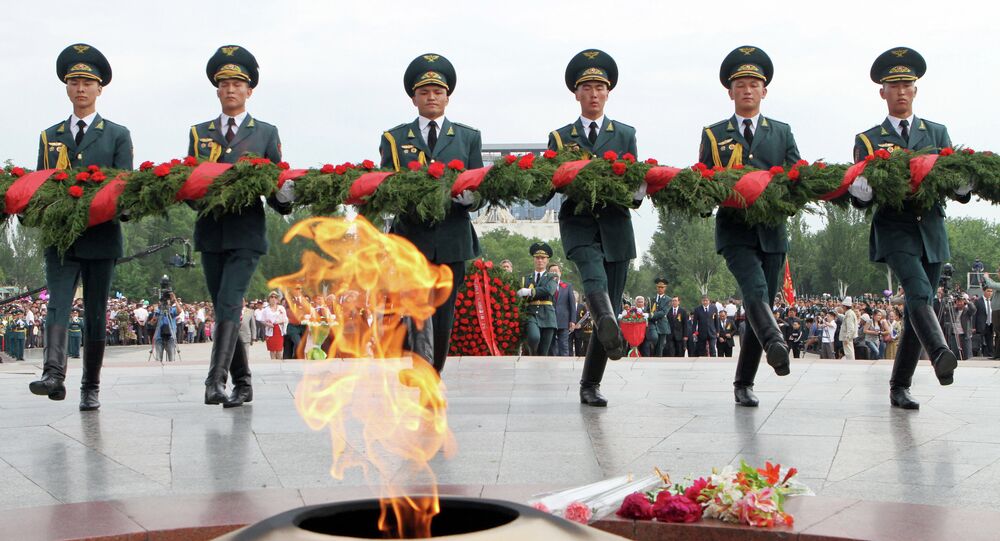 In an official letter to the Kyrgyz people 'on the occasion of Victory Day', US Charge d'Affaires in Kyrgyzstan Richard Miles congratulated Kyrgyzstan, without once mentioning the Soviet Union, which Kyrgyzstan was part of during the war.

"Seventy years ago, the flags of freedom unfurled across Europe and Asia as victorious Allied troops brought World War II to an end," Miles's address notes.

"The years of World War II were a hard and heroic time in the lives of both of our countries," it continues. "When it mattered most, a generation of American and Kyrgyz soldiers joined forces with our allies and showed the finest qualities of our nations and of humanity. Millions more like Zuurakan Kainazarova supported the war effort at home, working diligently in factories and on farms to provide supplies and food to those fighting in distant places like Normandy and Dubosekovo."

The envoy commented that "our combined determination – as you battled west and we battled east – drove a stake into the heart of fascism as in late April 1945, we shook hands over the River Elbe."

One Victory: Statement by Charge D’Affaires Richard Miles on the Occasion of Victory Day http://t.co/wbulqM2qAA pic.twitter.com/FGnA60OjZB

Failing to mention that Kyrgyzstanis fought in the ranks of the Red Army, alongside over 100 nationalities which comprised the Soviet people, Miles also took the opportunity to politicize the celebration, noting that: "today, the face of tyranny has changed, but the dangers to peace and freedom remain…let us remain faithful to the sacrifices of our parents and grandparents. Let us aspire to the selfless heroism of Cholponbai Tuleberdiev and stand firm against those who would redraw the borders of their neighbors by force, or massacre innocents who do not share their beliefs. We owe them an eternal debt – to finish the job they started, and as they did for us, to guarantee peace, prosperity, and liberty for our own children, and for our children’s children."

Miles's commentary marked a stark contrast to that of US Ambassador to Russia John Tefft, who participated in a wreath-laying ceremony in Moscow at the Tomb of the Unknown Soldier on Friday, and demonstratively told Russian media that "today I laid a wreath on behalf of the American people in memory of the great sacrifices of the Soviet people and their allies in America, England, and many other countries in the name of victory over Nazism."

Earlier this week, Tefft also made an emotional entry in his LiveJournal account, featuring photographs of his father and father-in-law, both veterans of the Second World War, where he explained to his Russian readers the American concept of 'the Greatest Generation'.

Kyrgyzstan's President Almazbek Atambayev is set to attend the Victory Day celebrations in Moscow on Saturday, while Kyrgyzstan's Victory Day festivities are expected to be the grandest national event of the year. Atambayev, whose father fought in the Red Army in the Great Patriotic War, has repeatedly commented on the great stock he places in the Soviet people's joint victory in the Second World War.

Seeming to preempt Miles's commentary on Friday, Belarusian President Alexander Lukashenko stated that he has observed a worrying tendency among world politicians to split the joint victory of the Soviet people by nationality:

"Today, looking to the past, we evaluate the present as well. Victory requires unity, solidary to the successors of the Soviet people. But with the passing of the decades, leaders and politicians have appeared – 'accountants', who dream to split the victory by nationality…The answer to these insinuations is simple: Nazism was smashed not by Russians, Belarusians, Ukrainians, Georgians, Kazakhs or Uzbeks. The Great Victory was made possible by the Soviet people!"

© Flickr / Bill Word
US Sends Mysterious 150 Tons of 'Diplomatic Mail' to Embassy in Kyrgyzstan
Over the past several months, Kyrgyz media have been commenting with worry that Miles, who was appointed Charge d'Affaires in February, had previously worked in countries which underwent color revolutions, including Serbia and Georgia. Having previously experienced a color revolution in 2005, Kyrgyz journalists' worries were heightened last month, when it was revealed that the US had recently sent a mysterious plane with over 150 tons of 'diplomatic mail' to its embassy in Bishkek.
...
Reddit
Google+
Blogger
Pinterest
StumbleUpon
Telegram
WhatsApp
615