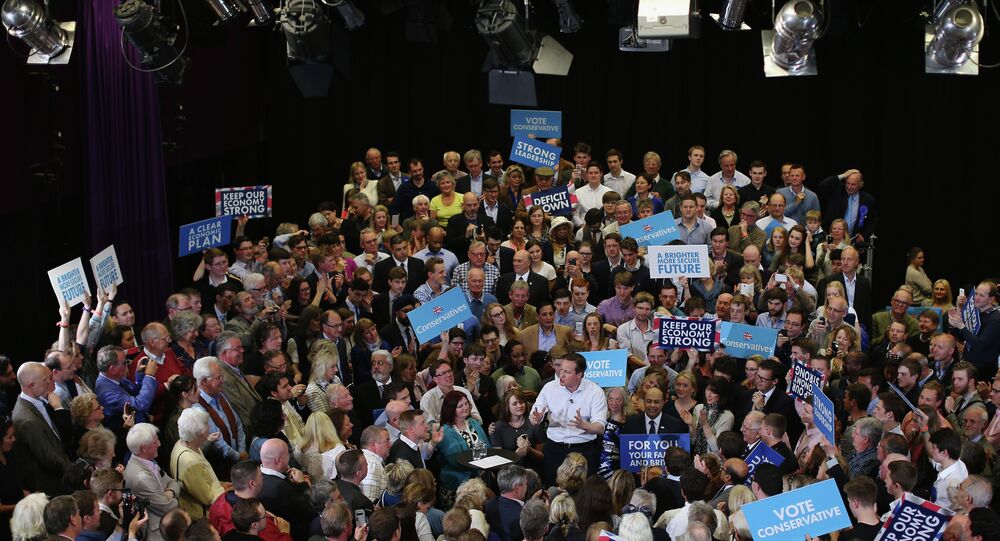 MOSCOW (Sputnik) – As the UK general election draws nearer and no party is forecast to win a majority, the country can expect its future defense policy to take one of several entirely different directions.

While some parties seek to introduce bold increases to the defense budget, others envision minimizing Britain’s role in the international military arena.

The ruling Conservative Party, headed by current Prime Minister David Cameron, has increased budgets for security and intelligence agencies throughout its years in power.

Over the next decade, the Conservatives intend to invest at least £160 billion (some $242 billion) in new military equipment, and replace the Royal Navy’s four Vanguard-class submarines with four new ballistic missile submarines.

As for regular armed services, the party has vowed not to reduce their strength to below 82,000 personnel.

Labour, the main British opposition party, has not reached a consensus on whether to renew the country's Trident nuclear weapons program.

Instead, it has expressed its commitment to a “minimum, credible, independent nuclear capability,” as well as an intention to work on global disarmament.

Perhaps surprisingly, the issue of Islamic State has not been much discussed ahead of the 2015 election, despite being outlined as a major national threat by the UK security services.

Hundreds of Britons have traveled to the Middle East to join the notoriously violent group, which has seized vast areas of Syria and Iraq.

The center-right Conservatives, and the rightist UK Independence party, commonly known as UKIP, are among those who have underscored the importance of battling the group in their manifestos.

© AFP 2021 / Lindsey Parnaby
UK Should Leave EU to Regain Border Control to Stem Immigration – UKIP
While the Conservatives are set to work for peace and stability in the Middle East, UKIP believes that problems first and foremost must be handled at home, describing the fight against Islamic extremism as “possibly the most important battle of our generation.”

Promoting itself as the “party of defense,” UKIP proposes to increase the defense budget to meet NATO’s two percent goal in 2015-2016, and “exceed it substantially” for its remaining years in government.

Much like the Conservatives, UKIP advocates against British nuclear disarmament, though unlike Cameron’s party, it does not envision balancing the budget through continued austerity measures, leading opponents to question the financial sustainability of its policies.

The centrist Liberal Democrats, who currently rule in coalition with the Conservatives, believe the United Kingdom should end “unnecessary” 24-hour nuclear patrols of the high seas, claiming the practice was designed to meet currently non-existing Cold War threats.

© Sputnik / Mark Hirst
LibDem’s Clegg Defends Entering 2010 Coalition With Conservatives
The party is committed to the global elimination of nuclear weapons, intending to contribute to this by cutting the production of Vanguard successor submarines.

The Lib Dems also wish to merge defense and security spending if they come to power.

The party is currently the United Kingdom’s third largest by membership number, and has Scottish independence as one of its core issues.

© AFP 2021 / ANDY BUCHANAN
SNP May Become Third Largest Party at Westminster - Campaign Director
Not surprisingly, the SNP envisions spending a larger share of the defense procurement budget in Scotland. The SNP has made the suggestion of a possible coalition with somewhat politically close Labour conditional on the latter ruling out the renewal of Trident.

Labour has notably also ruled out a coalition with the Scottish pro-independence party, with Labour leader Ed Miliband responding to media rumors by stating it “couldn't be clearer” the two would not strike a deal.

The Green Party of England and Wales, known simply as the Green Party, seeks to eliminate the United Kingdom’s nuclear weapons.

© REUTERS / Phil Noble
UK Economy to Have Stability Once More Equal Society Established
The Greens envision saving a total of £100 billion ($151.7 billion) over the next 30 years by canceling Trident and decommissioning all existing nuclear forces and facilities.

The party also wishes to initiate negotiations on a universal treaty for nuclear weapons to be completely eliminated, and pursue a policy of “defensive defense” and overseas conflict prevention.