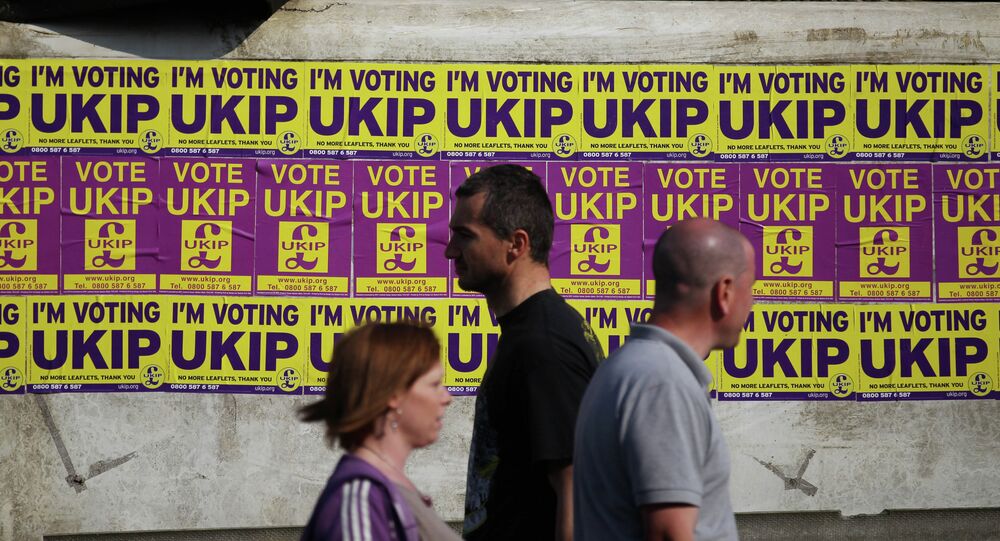 The United Kingdom should leave the European Union in order to regain control over its borders and migration, as Brussels will not negotiate on any restrictions to freedom of movement in the bloc, UK Independence Party (UKIP) spokeswoman for small business told Sputnik.

CORBY (Sputnik), Daria Chernyshova – The issue of migration has become increasingly acute in the United Kingdom, as the Conservative-led government failed to deliver on its promise to reduce migration flows to "tens of thousands."

© AP Photo /
Study Shows Brexit Would Hurt Germany More Than Grexit
Parker explained that increased migration flows had an impact on all spheres of public life, including schools, hospitals, jobs and housing. Those coming to work in Britain take the low-skilled and unskilled jobs out of the market meaning local people cannot do them.

The situation affects the national health system, causing longer lines, and leads to shortages in the housing sector, according to the UKIP spokeswoman. Even if the government builds 250,000 houses, given that there are 300,000 immigrants, there simply will not be enough homes for UK citizens.

"This is not by any means attacking Eastern Europeans at all, if I lived in Romania and I had no work, and I could come here and I could get work, I would do that. It is the system that is allowing huge numbers of people to come here," Parker said.

She underlined that UKIP wanted a points-based system to control immigration, like the one in operation in Australia. Parker asserted that such a system would be fairer in terms of who is allowed into the country.

"Why should we just take Europeans for example? What is wrong with people from India, Pakistan, Korea or anywhere else if they have the skills?"

© Flickr / Kalyan Neelamraju
Brexit 2020: What Are The Odds and What Next for Europe?
According to the UK Office for National Statistics, a total of 624,000 people immigrated to the United Kingdom in the year ending September 2014, which is almost 100,000 more than in the previous year.

The issue of immigration is one of the most talked about topics in the campaign for the country’s general election, to be held on May 7. UKIP currently ranks third in the latest YouGov poll behind the Conservative Party and the Labour Party, who are neck and neck.

The secretly negotiated EU-US trade agreement, the Transatlantic Trade and Investment Partnership (TTIP) deal, may lead to the British healthcare system being privatized by big US companies, Parker said.

The TTIP is a proposed trade and investment agreement between the United States and the European Union. Opponents of the deal believe it will make it harder for European countries to exercise control over their own markets and undermine the European Union's right to label genetically modified (GMO) food. On April 18, tens of thousands of people participated in anti-TTIP protests across Europe.

"If you agree and sign up to the TTIP, that will allow the large companies from America to be able to come in to our national health and get enormous contracts. So it is a kind of privatization of big business coming in via the back door. That is what people are feeling."

© AFP 2020 /
EU Chief Negotiator Urges TTIP Deal to Continue Despite Protests
She said that European officials working on the TTIP would leak a little bit of information when they thought the treaty was getting bad press, in order to put out something positive.

She expressed concern about how the TTIP could help small businesses, saying there was a great sense of anxiety in the country about the issue. According to Parker, people working for the UK National Health Service (NHS) are saying they were worried about their jobs, fearful that the TTIP is a form of privatization behind people’s backs.

The policies of the EU favor big corporations while hampering the development of small and medium-sized businesses, UKIP spokeswoman for small business said.

"It [EU] is not conducive to giving people the ability to be able to set up a business, do business simply and easily across Europe. Europe is set up very much for big business, it is huge corporations that do well in Europe."

© Flickr / Gary Knight
US-EU Trade Deal to Damage Small, Medium Business in Europe
EU member states were restricted to negotiate with other countries on trade as the European Union takes all those responsibilities. For this reason one of the main goals of UKIP is to leave the bloc, Parker noted.

She cited the example of the recently introduced European VAT registration regulation, which had come into effect on January 1. The new VAT rules stipulate that EU and non-EU businesses will have to register and account for VAT in every EU member state in which they supply services to consumers.

Parker said the new regulations meant lots of red tape for small businesses in the European Union, as now companies, however small, needed to register in 28 countries if they want to do business. She said that, as a result, some 200 UK small businesses had already closed down.

"A lot of people feel that we are good at putting the money into the EU, but all we are taking out is boxes of red tape and restrictions."

Despite the statements underlining the importance of small and medium-sized enterprises, the European Union did nothing when it came to practical steps, Parker said.

No UK political party looks likely to win a majority in Westminster in the May 7 general election but the vote will bring a change for the better in UK politics, a UKIP parliament candidate told Sputnik.

"It does not look like anybody is going to get a majority, so we are looking, I believe, at a change in British politics for the better, sort of a new revolution coming from within and people-led, by the way, not from the top down, but from the bottom up."

© Flickr / Gage Skidmore
UKIP Alliance With Conservatives Best Post-Election Outcome - Farage
Speaking about the possibility of a deal between the Conservative Party and UKIP, she reiterated UKIP's position, saying it was a definitive “no.”

She added that, if asked, UKIP would always join a particular piece of legislation if it were for the good of UK citizens. "We always put the people first rather than any political thing because we think that is where we come from, we are a people-led movement, political party," Parker said.

She said UKIP was “miles apart” from both the Conservatives, who, in her opinion, are not focused on the interests of working people, and “million miles away” from Labour, who “pretend” to be the party of working people.