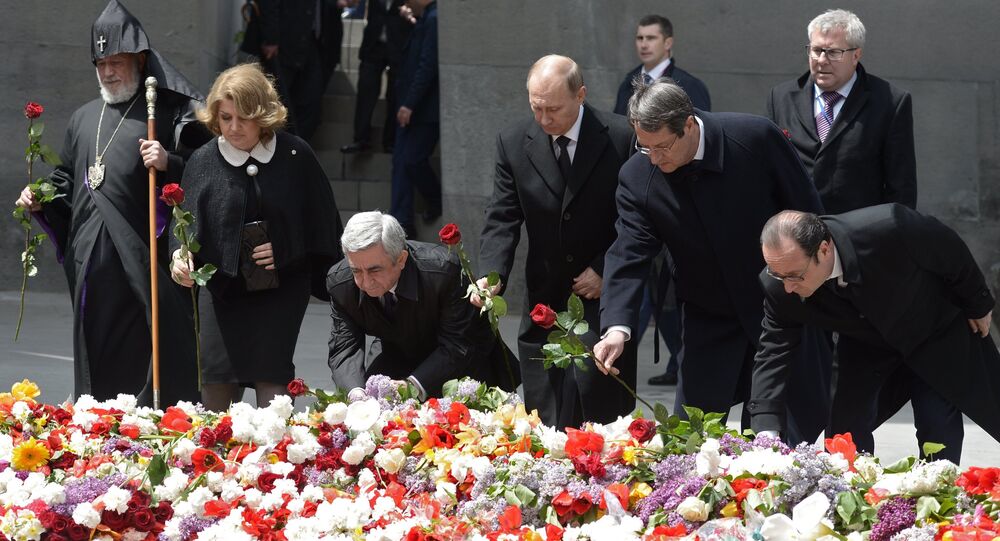 Diplomatic relations between Russia and Armenia were established on April 3, 1992. They are characterized by regular top- and high-level contacts.

MOSCOW (Sputnik) — Russian President Vladimir Putin met Friday with his Armenian counterpart Serge Sargsyan during his visit to the Armenian capital of Yerevan, which is hosting events in commemoration of the 100th anniversary of the 1915 Armenian genocide in the Ottoman Empire.

© Sputnik / Alexei Nikolsky
Neo-Nazism, Russophobia Are Modern-Day Evils – Putin
Diplomatic relations between Russia and Armenia were established on April 3, 1992. These relations are based on an allied partnership.

Over 200 interstate, intergovernmental and interagency treaties and agreements were signed. Fundamental documents include the Treaty of Friendship, Cooperation and Mutual Assistance of August 29, 1997 and the Declaration of Allied Cooperation in the 21st Century between Russia and Armenia, which was signed on September 26, 2000.

Russian-Armenian relations are characterized by regular top- and high-level contacts.

On August 19-20, 2010, then-Russian President Dmitry Medvedev made his first visit to Armenia. During the visit, a number of documents were signed, including a protocol extending to 49 years the duration of the 1995 bilateral treaty allowing the Russian 102nd Military Base to be deployed in Armenia's northwestern city of Gyumri. A number of intergovernmental agreements on readmission and cooperation in building new power units for the republic's nuclear power plant were also signed.

© Sputnik / Alexei Danichev
Russian, French Leaders May Discuss Mistral Deal in Armenia on Friday
Armenian President Serge Sargsyan made his first state visit to Russia on October 23-25, 2011. A number of intergovernmental and interagency documents were signed. During his visit, President Sargsyan met with the speakers of both houses of the Russian parliament and the mayor of Moscow. He also awarded then-President Dmitry Medvedev the republic's highest state decoration – the Order of Glory.

In 2013, Armenia reaffirmed the vector of its development, prioritizing Eurasia. On September 3, following talks between Vladimir Putin and Serge Sargsyan, Armenia declared its intention to join the Customs Union and participate in forging the Eurasian Economic Union.

On December 2, 2013, Russian President Vladimir Putin made a state visit to Armenia. The talks with Sargsyan focused on the development of bilateral cooperation, trade, economic and humanitarian cooperation and the prospects for Armenia's accession to the Customs Union and the Common Economic Space. Twelve bilateral documents were signed. President Putin also visited the Russian military base in Gyumri and, together with President Sargsyan, via video conference, watched the launch of the fifth power unit at the Razdan thermal power plant.

Igor Zarembo
Over 1,000 Russian Soldiers Begin Tactical Training in Armenia
The two leaders have also meet regularly on the sidelines of various summits.

On February 7, 2014, President Sargsyan attended the opening ceremony of the Winter Olympic Games in Russia's Sochi.

The countries maintain active contact between their prime ministers, as well as intensive interaction on ministerial and departmental levels.

© Sputnik / Vladimir Rodionov
Russian MiG-29 Fighter Pilots Begin Military Drills in Armenia
Russian-Armenian defense cooperation is designed to ensure the security of both countries and the southern flank of the CIS, as well as stability in the Trans-Caucasus. Armenian armed forces perform alert duty missions as part of the CIS Integrated Air Defense System. The 102nd Russian Military Base is stationed in the republic, and a joint Russian-Armenian military group has been formed.

The Border Protection Directorate of the Russian Federal Security Service, in conjunction with Armenian border guards, ensures the protection of the country's borders with Turkey and Iran.

Russia is Armenia's key foreign trade partner. According to the Russian Federal Customs Service, in 2014, their bilateral trade balance amounted to $1.4 billion, including Russian exports of $1.1 billion and imports of $313.5 million

Russia is Armenia's leading foreign investor. The volume of Russian investment accumulated since 1991 is about $3.4 billion. Major investment projects include the construction of natural gas energy facilities with the participation of Russia's Gazprom, the acquisition of 100 percent of Armentel, Armenia's national telecom company, by Russia's Vimpelcom and the acquisition of 100 percent of Armsberbank's assets by Russian VTB Bank, among others.

The Russian-Armenian (Slavonic) State University, founded in 1997, is one of Armenia's leading establishments of higher education. Branches of Russian colleges and universities are very popular in Armenia. There are various programs to support the Russian language in the republic.

On September 12, 2013, a cathedral of the Russian and Novo-Nakhichevan Diocese of the Armenian Apostolic Church was consecrated in Moscow.