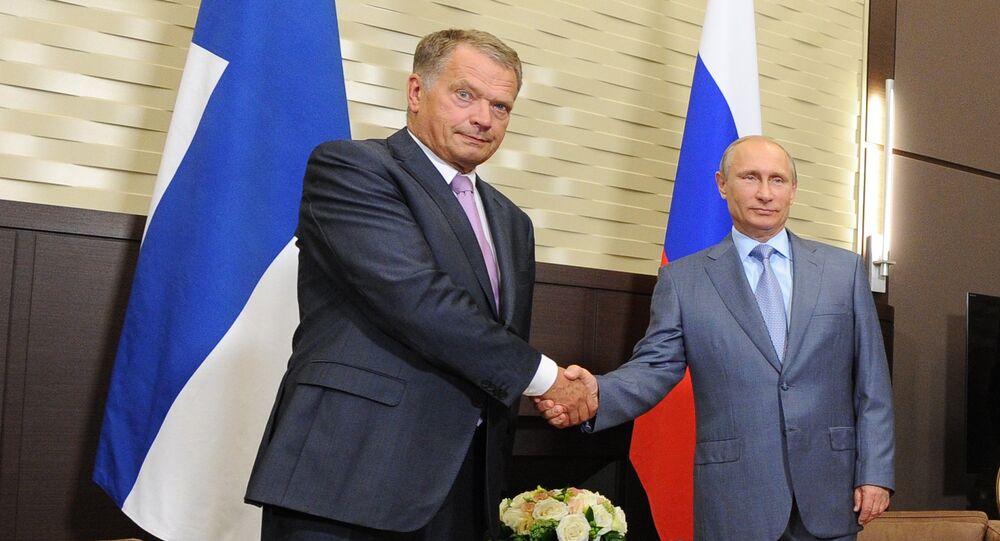 Russian President Vladimir Putin and Finnish President Sauli Niinistö discussed cooperation in bilateral and multilateral formats, relations between Russia and the European Union, as well as the partnership in the Arctic, according to the statement of the Kremlin press service.

© Sputnik / Ramil Sitdikov
Denmark, Norway, Finland to Cooperate With Russia in Arctic Despite Sanctions
MOSCOW (Sputnik) — Russian President Vladimir Putin and Finnish President Sauli Niinistö discussed in a phone call on Thursday a wide range of issues on bilateral and international agenda, including partnership in the Arctic, the Kremlin said.

"The presidents discussed pressing issues on the global agenda. In the context of Russia-Finland cooperation in bilateral and multilateral formats, the sides addressed relations between Russia and the European Union, as well as the partnership in the Arctic," the Kremlin press service said in a statement.

Putin and Niinistö also exchanged views on the situation in Ukraine, stressing the role of the Organization for Security and Co-operation in Europe (OSCE) and its monitoring mission in Ukraine as part of international efforts to help the reconciliation process in the crisis-hit country, the statement said.

Russia and Finland have been enjoying relations of mutual trust and cooperation in trade, economy and investment for the past two decades.

© Flickr / European Parliament
'Russia is a Friend': Finland’s Major SDP Party Rules Out Russian Threat
Russia's relations with NATO, of which Finland is a member, deteriorated in 2014 over the Ukraine crisis, as the United States, the European Union and their allies accused Moscow of participating in the armed conflict. Russia has repeatedly denied the accusations, saying there is no military solution to the Ukraine crisis.

Russia, alongside the United States, Canada, Norway and Denmark, has been laying claims to areas off the Arctic northern shore, which is believed to hold enormous amounts of oil and natural gas.

In February, Russia's Defense Minister Sergei Shoigu announced plans to step up the military presence in the region to defend the nation's interests.

Russia has conducted several military drills in the Arctic in recent months. As part of the country's published military strategy through 2020, Russia plans to create a network of naval facilities in the region for submarines and warships.