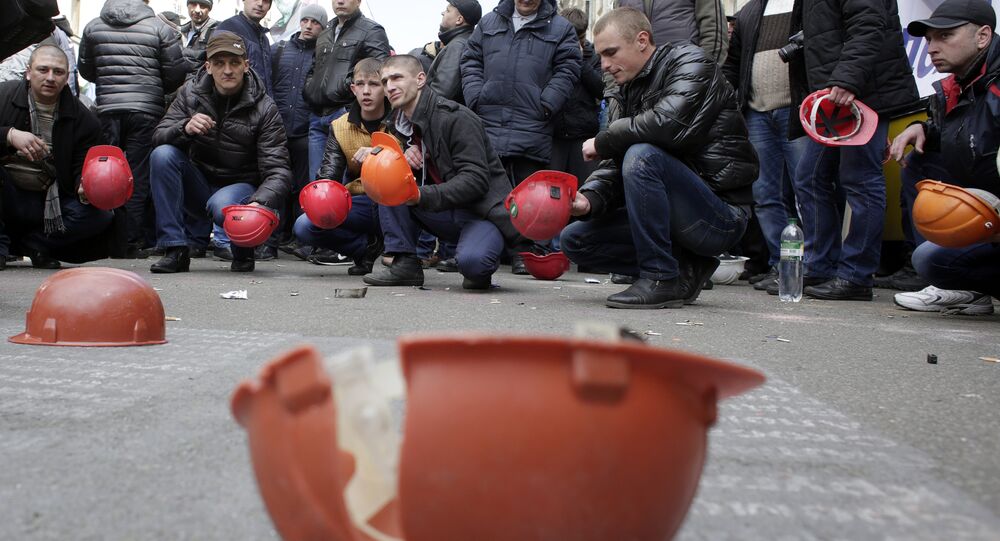 Thousands of protesters gathered in the center of Kiev on Thursday, from protesting miners to farmers and municipal government officials to unknown groups of young men with white balaclavas on their heads shouting "We Have Had Enough!"

The miners' protest, whose actions included kneeling to the ground and demonstratively hitting their helmets against the asphalt, included slogans demanding that authorities "Stop the destruction of the coal industry," "Pay what you owe!" and the statement "The energy industry must be managed by professionals."

Thursday's protests marked the second day of demonstrations; on Wednesday over 1,000 miners gathered for a series of demonstrations in front of parliament, the cabinet of ministers, and the presidential administration, demanding the payment of wages and pensions.

The cabinet of ministers responded to the protests by stating that 300 million hryvnia (about $17.7 million) has already been transferred to cover back pay, with another 100 million ($4.42 million) on the way. With at least 600 million hryvnia still owed to the miners, head of the Coal Industry Trade Union Viktor Turmanov said that the money which has been paid thus far amounted merely to "a handout" compared to what is owed.

Ukrainian media have been explaining that as a result of the conflict in the Donbass, Ukraine has lost a majority of its coal industry, including the most lucrative mines. Those mines that remain under Kiev's control are involved mostly in unprofitable mining, with many operating at a loss. Lacking the funds to maintain them, Kiev plans to close 12 of 32 mines located in the Donbass region. On Tuesday, miners held a congress in Kiev where they agreed on the demand for Demchyshyn's resignation, and on the creation of an organ to deal with crisis situations in the coal industry.

Ukrainian media have reported several thousand unknown people gathering in front of Ukraine's parliament alongside the protesting miners. Who exactly the protesters are remains unclear. They are carrying Ukrainian flags, with banners reading "Peace and Justice" also seen in the crowd; some of the protesters have covered their faces with white balaclavas; the protesters carried a large banner reading "We Have Had Enough"

© Photo : Twitter/@24todaynetua
Several thousand protesters covered Kiev's central streets, moving up Kreschatik Street from the Kiev City Soviet before joining the the miners in front of the Rada.

Ukraine's Ukrinform.ua has reported that protesters' cries included "Glory to Ukraine" and demands for "European living standards," with internet news hub Ostro reporting hearing cries of "Junta get out," "Soldiers will come and restore order," and demands that Prime Minister Arseniy Yatsenyuk to be removed from office.

Ukrainian authorities have estimated that the protesters, who have reduced the flow of traffic along several central city streets, numbered about 2,000 persons, adding that the perimeter to the parliament has been surrounded by security services.

Alongside the miners and the unknown protesters, about 200 farmers and municipal government representatives also came out in front of the Rada, protesting lawmakers' foot-dragging on a bill aimed at the decentralization of land ownership. Municipal representatives gathered to demand financial independence from regional and federal authorities.

Another smaller action is taking place in the Kiev region, just outside the capital, with about 50 protesters spilling onto one of the main highways comprising the Kiev ring road. Local police are attempting to bring the situation under control, demanding that protesters carry out their protest along guidelines provided for by law and not to disturb public order. Russia's RIA Novosti has reported that the citizens' protest is aimed at bringing attention to problems of corruption in the region.

Kiev's Ministry of Internal Affairs has released a press statement saying that "movement on the highway has been partially shut down." In addition to crowd control, an investigative group has been dispatched to the area to record offenses by the protesters.

On Wednesday, several hundred protesters gathered in front of the US Embassy in Kiev, carrying posters saying "USA thanks for WAR" and "We are Not Cattle", holding pictures of eastern cities damaged by war and burning a picture of US Assistant Secretary of State Victoria Nuland. Protesters demanded that the US stop interfering in Ukraine's internal affairs.